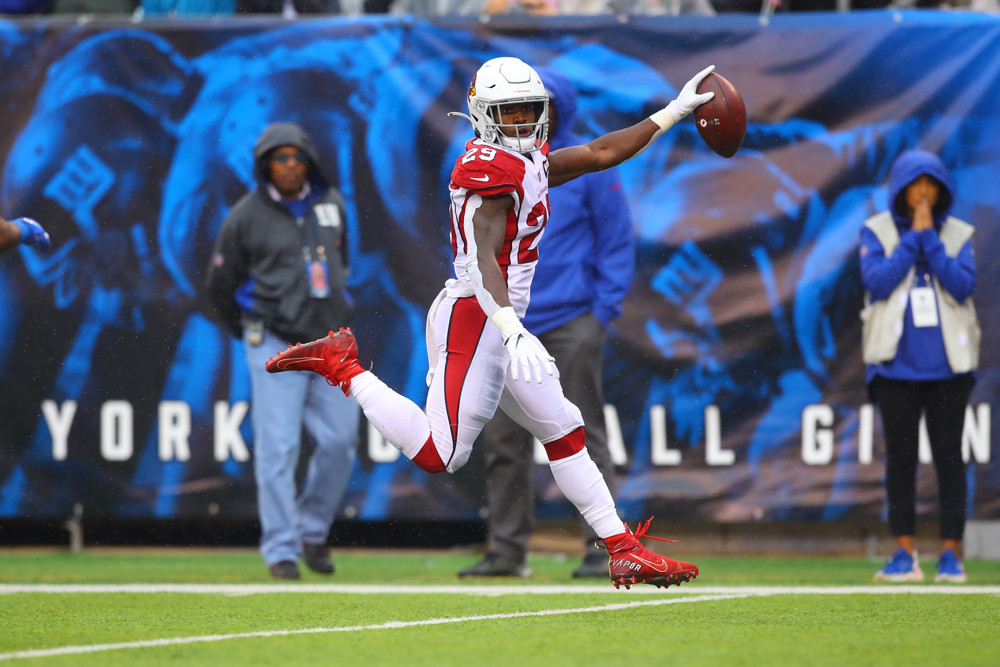 Words from coaches and general managers mean very little. What we really need to pay attention to from NFL franchises are actions. And while free agency doesn’t give us the full picture (April’s draft and training camp are still to come), it’s a very good start.

Note that Best Ball drafts are in full swing and our rankings are updating as news happens. The ones referenced in this article are from our Underdog Fantasy rankings, which you can access as part of our 2021 Draft Kit.

These are the players who have gained the most fantasy value in the wake of free agency.


1. Chase Edmonds, RB, Cardinals
Kenyan Drake played on an $8.4M transition tag in 2020 and was the clear-cut early-down back, handling 15.9 carries per game. The Cardinals did not make much of an effort to re-sign Drake for 2021 as he walked to the Raiders. So for now, the depth chart reads Chase Edmonds on top supported by Eno Benjamin, Jonathan Ward and Khalfani Muhammad.

Note that when Drake missed the Week 9 game vs. Miami last season, Edmonds played on 66-of-69 snaps and handled 28 touches. On the season, he was the preferred pass-down back as he saw 4.2 targets per game and lined up slot or wide on 26.8% of his snaps. This ability to be both a rushing workhorse and the pass-game option is exactly what we’re looking for in our running backs. If the Cardinals don’t take a running back in the top-3 rounds of the draft, Edmonds will be a fourth-round target for me.
Our current full-PPR Best Ball Ranking: 53rd overall


2. AJ Brown, WR, Titans
The Titans lost Corey Davis (6.6 targets per game last season), Jonnu Smith (4.3) and Adam Humphries (5.0) in free agency. They’ve only added Josh Reynolds to the pass-catching corps. Luckily for Ryan Tannehill, he has a true alpha in desperate need of more opportunity waiting. AJ Brown averaged just 5.2 targets per game as a rookie in 2019 and finished as the WR24 in half-PPR ppg. In 2020 he averaged 7.6 targets and finished as the WR5 — behind only Davante Adams, Tyreek Hill, Stef Diggs and Calvin Ridley. The idea of what Brown can do with 8-10 targets per game weekly is arousing.
Our current full-PPR Best Ball Ranking: 17th overall

3. Tyler Higbee, TE, Rams
The offseason couldn’t have run out much better for Higbee. He got a serious upgrade at quarterback with Matthew Stafford replacing Jared Goff. Josh Reynolds walked in free agency. And most importantly, Gerald Everett signed with the Seahawks. Remember that when Everett missed the final five games of the 2019 season, Higbee went absolutely nuclear: 7-107-1, 7-116-0, 12-111-0, 9-104-0, 8-84-1.

Replicating that stretch is obviously unrealistic, but the simple fact that Higbee has that kind of repeatable ceiling makes him unique at the tight end position. A lot of the tight ends drafted around Higbee aren’t even capable of 100-yard games.
Our current full-PPR Best Ball Ranking: 108th overall


4. Daniel Jones, QB, Giants
As a rookie in 2019, Daniel Jones flashed serious fantasy upside. He had four games of 30+ DraftKings points in just 12 starts. But with Jason Garrett hired to run the offense and a brutal schedule, Jones took a huge step back in 2020. He threw a pathetic 11 TDs on 448 attempts and had zero games with more than 22 DraftKings points.

Enter alpha WR Kenny Golladay, reliable TE Kyle Rudolph and G Zach Fulton in free agency. It gives Jones a truly strong group of weapons with Golladay and Darius Slayton on the outside, Sterling Shepard in the slot and Saquon Barkley a big threat in the pass game. The addition of Rudolph should allow Evan Engram to be used as the freaky athlete he is — instead of in the Jason Witten role.
Our current full-PPR Best Ball Ranking: 180th overall


5. Irv Smith, TE, Vikings
The Vikings asked Kyle Rudolph to take a paycut. He said no and went on to get $9.2M guaranteed from the Giants. That should be fine with Vikes, who used the 50th overall pick on Irv Smith in 2019 and is now entering his third NFL season at just 23 years old. It’s an ideal breakout situation for Smith, who only saw a 13% target share in the four games that Rudolph missed last season but has clear upside now. Expect an every-down role with Tyler Conklin and Brandon Dillon in support.
Our current full-PPR Best Ball Ranking: 130th overall

HONORABLE MENTION
Aaron Jones, Packers — Removing pass-down back Jamaal Williams and replacing him with early-down big back AJ Dillon is good for Jones’ target projection. He won’t come off the field for full series like he did last year. We have Jones 10th overall right now.

Mike Davis, Falcons — An underrated tackle-breaker and pass-catching back, Davis stands alone on top of the depth chart right now. We’ll see what happens in the draft though, as the Falcons are rumored to be interested in an RB with one of their first three picks.

Mike Boone, Broncos — Hero of #TeamPreseason only needs to beat out Royce Freeman to be the direct backup behind overrated Melvin Gordon.

Robby Anderson and DJ Moore, Panthers — Remove Curtis Samuel’s 6.5 targets per game and replace them with David Moore, who projects for a far smaller target share. I also expect the Panthers to make a splash at QB in the next month.

Anthony Firkser, Titans — The replacement for Jonnu Smith is a far better pass-catcher than blocker. In the one game Jonnu missed last season, the Firk Daddy went 5-51-0 on a 15.5% target share.

Breshad Perriman, Lions — An underrated talent who will finally get a clean opportunity. The Lions have arguably the thinnest WR depth chart in the league and Perriman sits on top.