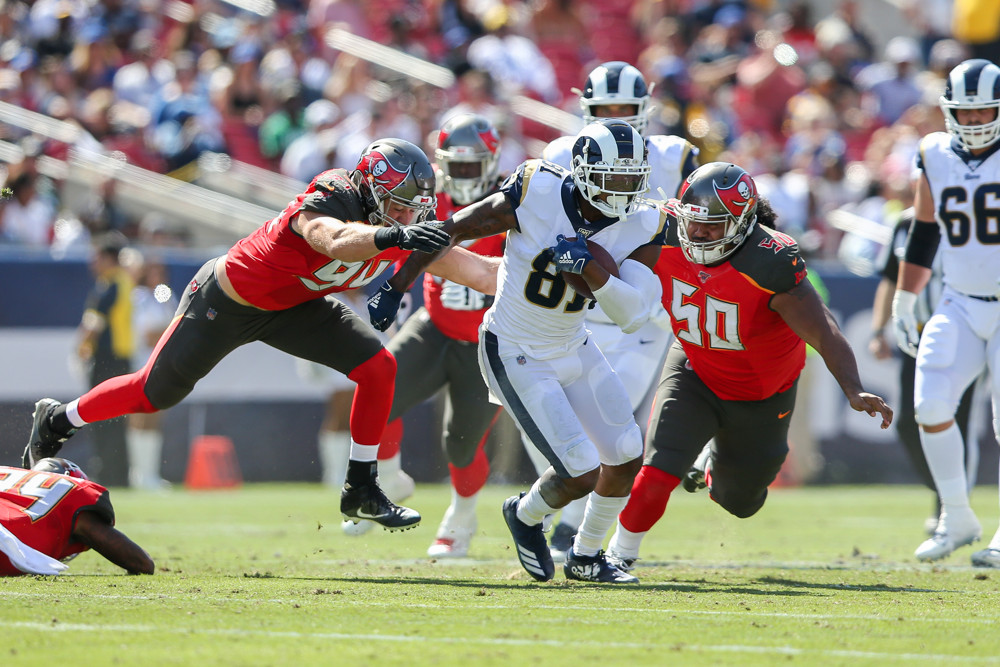 Notes: Yes, Gerald Everett has racked up 19 targets over the last two weeks and totaled 180 yards in those games. Note that those were two absurd shootouts – in Week 4 the Rams ran 81 plays against the Bucs and in Week 5 Jared Goff chucked it 49 times against the Seahawks. So I’m not sold that Everett’s usage has turned a corner here and even if it has, a 42.5-yard line is massive for a secondary piece against the 49ers. It’s a case of the oddsmakers contracting recency bias.

Notes: I’m not sure how healthy Vance is as he didn’t even practice Wednesday/Thursday before getting in a full session Friday. We could certainly see a limited snap count. Last week, McDonald only played on 35-of-58 snaps against the Ravens. And now Devlin Hodges is under center, representing a sizable downgrade from Mason Rudolph.

Notes: The Ravens should have no problem shredding this injury-ravaged Bengals team. That likely means fewer designed runs and fewer desperation tuck-and-runs from Jackson – much like we saw in Week 1 against Miami when he only ran it three times. Note that this 61.5-yard line is almost exactly what Jackson is averaging for the season. But again, mean is not the way to look at props as it’s dragged up by outliers like the 120-yard game Lamar ran for against the Cardinals.

Notes: This is a lot of juice to lay and more than I typically like to – especially on an over. But Parker is averaging 6.0 targets per game on the year, so the reason the number is so low here is due to his pathetic 41% catch rate. But with Josh Rosen under center, the Dolphins coming out of a bye and a home game against the Redskins, Parker has by far his best chance at efficiency.

Notes: I do not like playing Peterson in DFS because his lack of pass-game role caps both floor and ceiling. But this rushing yardage line does not reflect the coaching change in Washington. Bill Callahan is adamant that his team must be on #TeamEstablishTheRun and I believe he plans to get Adrian Peterson 20 carries at all costs. I’m skeptical on efficiency, but even 3.0 yards per carry and 18 carries would get the money here.

Notes: I think Kupp is a strong play in DFS and am considering him in cash on DraftKings. But if we’re talking median projection (not mean), 90.5 yards is an absurd line against one of the NFL’s best defenses. Due to the wide-ranging variance at the wideout position, these 90+ yard props are ones I’m typically looking to find unders on.

Notes: I actually bet this before Vernon Davis (concussion) was ruled out and I thought there was a chance the Vern Daddy would play. I still think this Sprinkle under is a bet, but it’s much thinner now. It’s an example of a book putting a player prop out too early (I thought), allowing me to merge plays. If Vernon suits up, the Sprinkle bet was one of the best on the board. If Vernon sits, the bet is still slightly +EV.