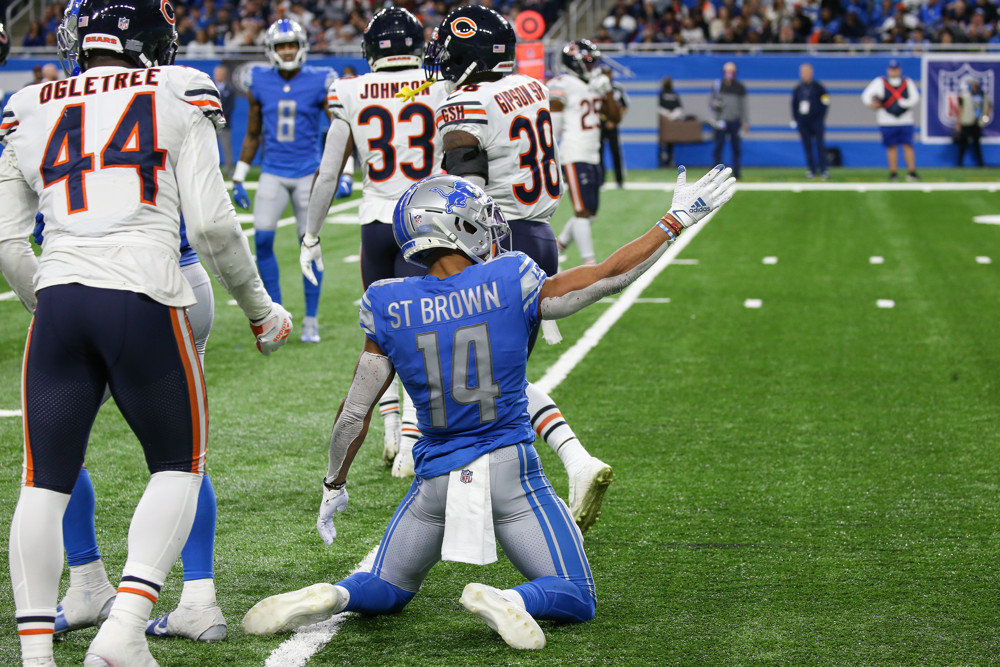 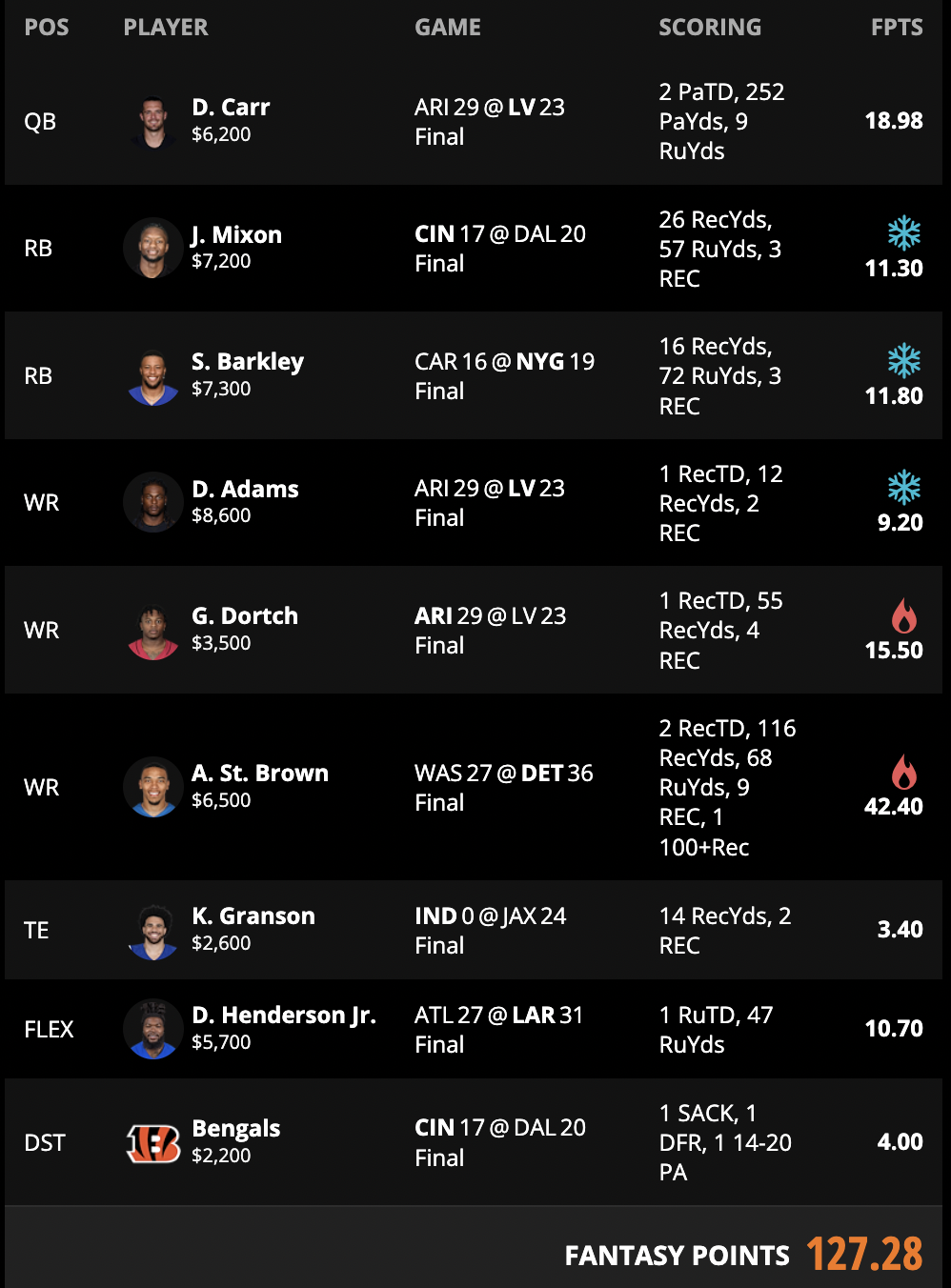 This was a relatively straightforward slate. Unlike Week 1, we had access to plenty of strong cheap value. There also wasn’t a ton to reach for at the expensive end, which set up clear balanced builds that had a ton of upside. My goal was not to overspend on players just because I had the money – I wanted to generate a big ceiling in as many spots as possible.

MY MUST PLAYS
* I rarely consider a D/ST a “must.” But DraftKings released Week 2 pricing prior to Dak Prescott’s Week 1 Sunday Night Football injury. That meant the Bengals D/ST were $2200 (my preferred cash price range for a defense) against Cooper Rush. Also note that Brandon Thorn had the injury-riddled Cowboys OL ranked 19th this week.

* Last week, Saquon Barkley was nearly a must at $6100. Given how healthy he looked and his unique three-down plus goal-line role, $7300 at home against the Panthers was a lock. There simply aren’t many explosive running backs who get all the early down work, all the pass-down work, and all the goal-line work. Those players are almost always $8500 or more.

* The Cardinals have one of the worst secondaries in the league. Davante Adams is capable of a 45% target share as we saw in Week 1. The Raiders also flashed some of the goal-line pass plays that made Adams such a unique fantasy WR in Green Bay. I wasn’t fading Adams at $8600 in this spot.

MY WANT PLAYS
* Amon-Ra St. Brown was not a lock by any stretch. He was priced relatively appropriately at $6500. But those who have been following since the summer know how I feel about The Sun God, his ability, his role, and how he fits with what Jared Goff does well.

I really, really wanted exposure to the WAS-DET game, as the Lions combo of offensive ability and defensive ineptitude breeds shootouts. So while I did look at some Jerry Jeudy combos, I thought the ARSB sides were a good chunk better for cash. It’s really hard for St. Brown to get lost in this Lions offense and environment – Jeudy certainly could get lost in all of Denver’s pieces plus efficiency concerns.

* It was important to understand the context of the running back slate this week. There were at least six RBs that I thought were really strong cash plays, and a few more solid ones. In spots like that, I try not to spend all the way up unless the spots are pristine. And they weren’t.

Given the state of the Colts injury-riddled offense as well as the line crashing toward Jacksonville, I thought there was a good chance the Jaguars could control the game. Obviously that’s not great for Jonathan Taylor. And at $9900, we have to be really picky.

And while I did like Christian McCaffrey a lot, he was still on the road with maybe a bit shakier pass-game role than he’s had in the past.

The mid-range RB I liked most was Joe Mixon, whose pass-game role showed real signs of improvement Week 1. Given that and the improved offensive line, Mixon’s offensive environment plus talent plus role was elite – especially at $7200.

I preferred Mixon to Leonard Fournette, as the Bucs had a tough matchup with a brutally bad offensive line and no Godwin/Julio. I also preferred Mixon to D’Andre Swift, who was battling an ankle issue. The Cardinals’ subterranean offensive floor had me off James Conner, and Javonte Williams was a bit expensive for a timeshare back.

* The trickiest spot of the slate was Darrell Henderson. If you’re a subscriber, you hopefully read Top Plays on Sunday morning. I added a note there as a source told me that Akers would have a much bigger role Week 2 than he had Week 1. But even if the source was right, Henderson made everything work at just $5700 so I stuck with him. I wasn’t willing to compromise the Sun God to get off DHendo. Even at just 50% of the RB workload Henderson was a decent play in this spot. We projected 63%.

So I only really considered three tight ends: Juwan Johnson, Kylen Granson, and Albert Okwuegbunam. And I didn’t feel the need to spend an extra $1200 on Albert O after the Broncos threw the ball to four different tight ends in Week 1.

That left Johnson vs. Granson. With Michael Pittman and Alec Pierce both out, Granson’s target competition was weaker. But Johnson had the better spot against the Bucs’ pass-funneling defense. Both projected to run a route on an overwhelming amount of their quarterback’s dropbacks. In the end I slightly preferred Granson for chance at a more featured role, but it was a coin flip.

* I only really considered two quarterbacks: Trey Lance and Derek Carr. I thought briefly about Lamar Jackson, but playing him meant I would have had to sacrifice at wideout. And anytime it’s even close, I prefer to pay down at QB instead of WR.

So I simply let the rest of my team and my 1pm ET start dictate who I played between Lance and Carr. In this build, I had the money for Carr (he was $500 more). And since I got off to a good start with Amon-Ra St. Brown, I thought the floor of Carr was better. If I had failed during the 1pm ET games, I may have swapped onto Lance for the ceiling.

Week 2 Results
I was fortunate in that I could have easily landed on Trey Lance. So I’ll take that run good. I also think that in hindsight, perhaps listening to information we had and getting off Darrell Henderson was right. And I also lost the flip on Kylen Granson vs. Juwan Johnson. But being adamant that I needed to have Amon-Ra St. Brown was the key to booking another win. And even though the results on Saquon, Mixon, and Davante were bad… their usage will show that the plays were right. So I feel relatively good about the way I played this week, despite a worse outcome than Week 1.