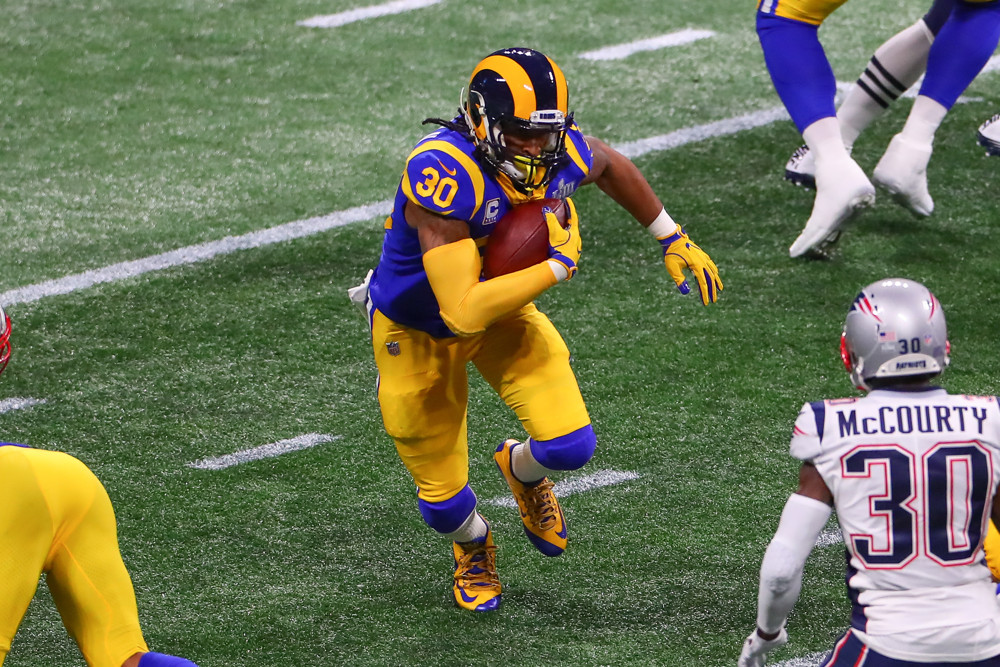 Rams Passing Game
Jared Goff enters his third season under Sean McVay coming off QB7 fantasy results with career highs in touchdown passes (32), completion rate (64.9%), yards per attempt (8.4) and QBR (65.4) as quarterback of the NFC champions. Including playoffs, Goff’s play sharply regressed over the Rams’ final eight games, however, completing just 165-of-286 passes (57.7%) for 1,853 yards (6.48 YPA) and a 7:8 TD-to-INT ratio from the start of December on. The Rams have not been a particularly high-volume passing team under McVay, and Goff adds nothing with his legs. And interior-line shakeup is concerning after the losses of LG Rodger Saffold and C John Sullivan; Goff ranked No. 4 among 30 qualified passers in QB rating when kept clean (117.1) but nose dove to 22ndunder pressure (59.8). New first-team C Brian Allen and LG Joseph Noteboom have combined for 110 career snaps. LT Andrew Whitworth turns 38 later this year.

Brandin Cooks enters his age-26 campaign with the 22nd-most receiving yards of all time within the first five years of a player’s career. He’s topped 1,000 yards in four straight seasons and set 2018 career highs in yards (1,204) and yards per target (10.3). Feared by some to present “decoy” risk after Sammy Watkins flopped in the same spot the year before, Cooks instead caught 80 balls and finished top 20 among 96 qualified receivers in yards per route run (2.06). Although Robert Woods and Cooper Kupp’s roles are safe, Cooks maintains room for growth in his prime entering his second season in a high-octane passing system. Goff and Cooks’ deep game was a 2018 work in progress; Cooks gained only 370 yards on 20-plus-yard targets after gaining 608, 544, and 489 yards on such throws in the three years prior.

Robert Woodserupted for career highs across the board (86/1,219/6) as the Rams’ 2018 target leader, averaging 8.3 per game including playoffs and topping 60 yards in 16-of-19 affairs (84%). One of the league’s most-versatile receivers, Woods kicked inside when Cooper Kupp tore his ACL and benefited from running higher-percentage routes in the slot. Woods has finished No. 8 of 93 and No. 23 among 96 qualified receivers in yards per route run through two seasons with the Rams, forming an impeccable rapport with Goff and padding his stats with 19 rushing attempts for 157 yards and a touchdown last season. He ranked third among NFL receivers in carries, capitalizing for nearly 1.4 fantasy rushing points per game. Although Kupp’s return will cut into his usage, Woods’ role security and consistency lock him into WR2/3 treatment with underrated upside if Kupp’s ACL-return season starts slower than expected.

Although reports have been positive regarding Cooper Kupp’s recovery from last November’s ACL tear, the lateness in the season with which it occurred combined with Kupp’s agility-based playing style significantly heighten his fantasy risk. Kupp’s ADP reflects minimal concern from drafters, however, as he continually goes among this year’s top-20 receivers. When healthy, Kupp has been a true difference maker for Goff, who’s averaged 1.3 more yards per attempt and 22.6 more yards per game with Kupp in the lineup over the past two years. My best guess is Kupp will start the 2019 season slow, be quickly chalked up as a fantasy disappointment, then finish fast as he becomes further removed from the injury.

Gerald Everett is a third-year breakout candidate after his routes run per game jumped from 12.9 in last season’s initial 11 weeks to 23.5 the rest of the way, including playoffs. Although the spike coincided with Kupp’s absence, Tyler Higbee is in fact Everett’s primary playing-time obstacle, and Higbee averaged just 12.0 routes run over those final eight games. In three playoff affairs, Everett ran 69 routes to Higbee’s 33. An 88th-percentile SPARQ athlete with 4.62 speed at 6-foot-3, 239, Everett was initially drafted to become ex-Redskins assistant McVay’s next Jordan Reed. In 2019, Everett needs to beat out Higbee for a permanent role in the Rams’ three-receiver, one-tight end package to realize his potential.

Rams Running Game
Todd Gurley is 2019’s most-polarizing fantasy commodity after scoring as last year’s overall RB1 in Weeks 1-13, then experiencing inflammation in the same knee in which Gurley tore his ACL at Georgia, costing Gurley the Rams’ final two regular season games. Limited in the playoffs and outplayed by December street free agent pickup C.J. Anderson, Gurley’s trainer confirmed after the season his client developed “an arthritic component” in the knee. The Rams’ outward actions have screamed concern, matching backup grinder Malcolm Brown’s two-year, $3.3 million offer sheet from Detroit and trading up for Alvin Kamara clone Darrell Henderson at No. 70 overall. Gurley’s knee is believed to be nearing a bone-on-bone situation, which would limit his ability to stay in optimal condition and enhance Gurley’s setback risk. I’ve personally been unable to pull the trigger on Gurley anywhere in the top-three rounds.

The Rams traded up to draft Darrell Henderson early in April’s third round after he logged an absurd 431/3,545/36 (8.2 YPC) career rushing line at Memphis, gaining ten yards or more on 26% of his 2018 carries and catching 63 passes across three years. Henderson’s average of 6.2 yards after contact per rushing attempt led the nation in 2018, and his 8.9 yards-per-carry average last season was the NCAA’s premier mark since 1956. At 5-foot-8, 208 with 4.49 jets, Henderson is a compactly-built big-play specialist. Gurley’s increasing knee instability positions Henderson to be one of this year’s highest-ceiling RB3/flex fantasy picks.

Malcolm Brown and John Kelly finalize the Rams’ backfield depth, the importance of which has grown due to Gurley’s knee. Brown was unavailable to replace Gurley late last year due to a broken collarbone but averaged 4.9 yards on 43 carries, and Rams brass thought enough of him to match the Lions’ two-year, $3.3 million offer sheet after tendering Brown at the $2.03 million level in restricted free agency. At 224 pounds, Brown may be second in line for early-down carries should Gurley break down. Despite an impressive preseason, the Rams showed no regular-season trust in sixth-round rookie Kelly, playing C.J. Anderson over him down the stretch. Coming out of Tennessee, Kelly managed a painful 4.69 forty at 5-foot-10, 216 but caught 37 passes in his final college season and is a violent tackle breaker on tape.

2019 Vegas Win Total
The Rams’ 2019 Win Total is 10.5 games, a mark they’ve beaten in each of Sean McVay’s two seasons as coach with records of 11-5 and 13-3. Last year’s Rams went an incredibly fortunate 6-1 in one-score games and outkicked their Pythagorean Win Expectation by 2.1 victories. Yet this year’s Rams draw the NFL’s seventh-softest slate based on Opponent Win Totals. Every division rival – San Francisco, Arizona, and Seattle – either looks likely to improve from last season or is already a quality opponent, however, and personnel losses on the offensive and defensive lines render Los Angeles’ roster just vulnerable enough to bet the under on 10.5, where the Rams could still win ten games and we still win the bet.