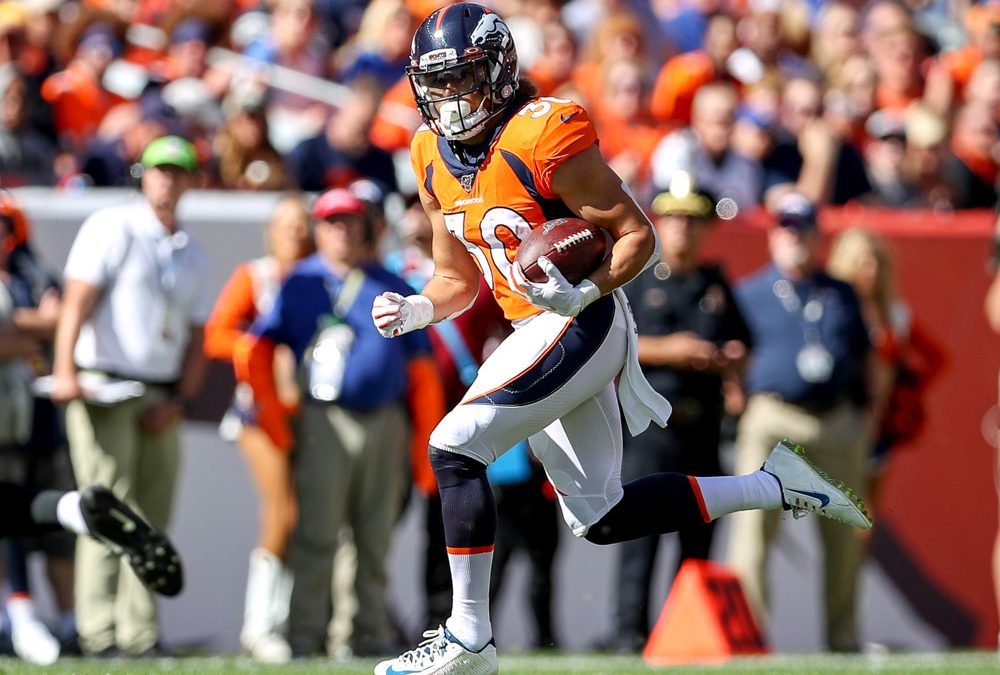 1. Per Sports Info Solutions, Buffalo has stacked the box with eight-plus defenders on just 0.6% of its 2019 run-defense snaps, while Phillip Lindsay has shredded light boxes for 5.9 yards per carry compared to 2.5 YPC when opposing defensive boxes are stacked.

Lindsay ($5200, 13-16%) is coming in as an acceptable but not strong value play, and we think some may shy away from him given the perceived difficult matchup and historical lack of volume to justify a play in this type of spot. This makes him fairly appealing to us in any tournament format. While not a strong value play, Courtland Sutton ($6200, 5-8%) is priced highly enough to where we think most will shy away, giving him some large-field only tournament appeal if looking for a contrarian option. Noah Fant ($3900, 5-8%) is a fringe cash game option and will not go overlooked by the field coming off games of 100 yards and a touchdown and 11 targets, respectively. He’s in play for tournaments, but should catch a lot more ownership than he has all season.

The problem with Josh Allen ($6400, 2-4%) is that he’s priced pretty highly in a mediocre matchup, while his stacking options are all quite expensive. You can pair him with any reasonable option on the Bills and expect to get fairly low ownership, giving him some appeal before even considering his rushing upside, which we finally saw again this year last week. We’re still in on Devin Singletary ($5400, 5-8%) as a pay-slightly-up to be contrarian option, but only in large-field GPP’s.

2. Saquon Barkley’s health should have improved during New York’s Week 11 bye, while his Week 12 matchup is favorable against a soft Bears run defense enemy backs clocked for an average of 101.8 rushing yards and nine total rushing TDs over its last six games.

Barkley ($7900, 9-12%) just hasn’t been that good this year, and we think it’s possible the field is going to be fairly reluctant to play him here. He still has big touch and big play upside, making him viable in tournaments as a somewhat contrarian option. With Sterling Shepard ($4900, 2-4%) back, all three Giants receivers are somewhat overpriced and should catch minimal ownership, but we’re not buying here as the matchup is still difficult and volume should be spread around more than usual.

The only thing we can really say about the Bears is that we are confident the field has no interest in playing them in tournaments. David Montgomery ($5500, 2-4%) and Taylor Gabriel ($4200, 2-4%) we believe are both viable GPP plays, with Gabriel quietly coming off of 14 targets on Sunday Night’s debacle against the Rams.

3. Despite having faced a league-low 292 pass attempts, Cincinnati has coughed up the NFL’s third-most 20-plus-yard completions (47). Dionte Johnson and James Washington are upside WR3 plays with hiked opportunity in a plus spot.

The problem here is the price, as both Johnson ($5100, 5-8%) and Washington ($5000, 2-4%) are $5k receivers on a team who just wants to run the ball. We think it will take a fluke play or the Steelers finding themselves in catch up mode to see a ceiling game, but there should be hardly any ownership.

It’s incredibly hard to get excited about any Bengals, especially with Joe Mixon’s ($5900, 2-4%) price rising with his recent uptick in production. Squeaky wheel candidate Tyler Boyd ($5000, 5-8%) has at least a modest amount of appeal, but in general, we think targeting this game is extremely thin.

4. Quarterbacks have a 24:8 TD-to-INT ratio against Oakland while averaging 8.2 yards per attempt, the NFL’s fourth-highest mark. Sam Darnold is an upside streamer with legit DFS playability after back-to-back top-eight QB1 scores.

5. A dangerous runner with 4.56 speed, Jeff Driskel has cobbled together a 13/88/1 rushing line in his two starts, raising Driskel’s floor and ceiling as one of this week’s most-underrated quarterback plays. Driskel is equipped with a dynamic supporting cast in an offense that struggles to move the ball consistently on the ground, creating its own pass-funnel scenarios.

Casual observers are still likely not to be interested in Driskel ($5500, 2-4%) and we think that’s a mistake. He’s arguably viable in tournaments playing him without one of his receivers, but we like stacking him in large-field GPP’s only with either Marvin Jones ($6100, 2-4%) or Kenny Golladay ($6600, 2-4%). These are not value plays, and should not be heavily owned, particularly in higher-stakes contests.

Coming off of a dud game with a terrible quarterback, the field is likely going to be looking away from Terry McLaurin ($6000, 2-4%), giving him some appeal to us in large fields. If Adrian Peterson misses, Derrius Guice ($4700, 0-1%) would become an excellent and we think popular play, though we are expecting Peterson to suit up. We think there is some usage upside for Guice even if Peterson does play, given the Redskins likely are interested in seeing what they have with him, particularly in the passing game.