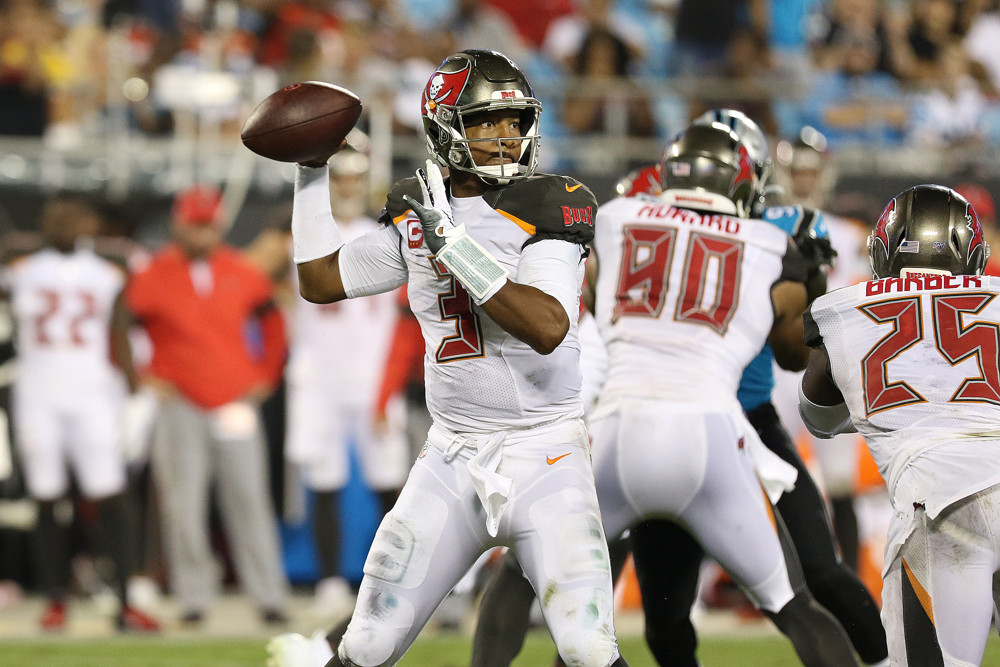 1. Jameis Winston plays his best ball against man coverage – which the Lions run at the NFL’s second-highest rate – and has thrown 22 of his 26 touchdown passes in clean pockets; Detroit ranks 29th in sack rate (5.0%) and dead last in QB Hit Rate (11.5%). This game also lacks weather concerns beneath Ford Field’s dome.

Winston ($6900, 2-4%) being relatively overpriced with concerns about the offense following Mike Evans’ injury should keep his ownership in check. To be clear, this is far from a sure-thing. As far as stacking options, Chris Godwin ($7700, 13-16%) is priced in elite WR1 territory, but clearly has slate breaking upside here. Breshad Perriman ($4500, 5-8%) should be looking at a decent floor and ceiling here, but won’t be overlooked as he’s obviously stepping into a good spot and performed well last week. O.J Howard ($3500, 2-4%) is an interesting deep-field dart throw, as he appears to be playing better while stepping into serious potential for increased opportunity. Justin Watson has playing time concerns with Scotty Miller back, but got a game ball last week and will at least rotate in significantly to Evans’ old role.

For the Lions, David Blough ($5300, 2-4%) is priced as a lower-end second tier value, but we think the elite matchup and solid stacking options will ensure the field gives him modest consideration. Still, it’s hard to ignore the ease of stacking him, with Danny Amendola ($4100, 5-8%) checking in as an elite value play while Kenny Golladay ($7200, 13-16%) is priced appropriately but has slate-breaking upside as per usual. Logan Thomas ($2600, 0-1%) is an unexciting but viable TE as a last-piece if stacking the Lions.

2. The continued disintegration of Philly’s wideout corps has locked Zach Ertz into extreme-volume usage with double-digit targets in four of his last five games and a sparkling 80.6-yard average during that span. The Skins have allowed the NFL’s seventh-most fantasy points to tight ends. Ertz is Week 15’s No. 1 overall fantasy tight end play.

Ertz’s ($6000, 17-20%) season has really turned around thanks in part to injuries to just about everyone competing for targets. This is going to be a popular play, but we think it’s more than viable in tournaments at such a thin position. Greg Ward ($3000, 9-12%) offers salary relief with questionable real-life talent and upside. We don’t think he should be prioritized but is an acceptable play. JJ Arecga-Whiteside ($3300, 0-1%) is essentially the same price, but will catch much lower ownership but offers similar questionable upside.

If stacking the Eagles, we recommend not requiring or even avoiding bringing-it-back with the Redskins. Ceiling fantasy outputs have been few and far between this year, even with low prices. Adrian Peterson ($4400, 2-4%) is a “by the numbers” acceptable play that we are avoiding. Terry McLaurin ($5300, 2-4%) is an acceptable last-piece or bring-it-back option, and that’s about it on this team. The Redskins defense at $2600 earns an honorable mention here as a play that should go nearly unowned while checking in as an adequate play by the numbers.

3. DK Metcalf’s Week 15 matchup also looks tough on paper against Panthers top CB James Bradberry, but the rookie phenom is an entrenched WR2 with 75-plus yards and/or a touchdown in 11-of-13 games. Bradberry has been far from perfect lately, surrendering 25 catches on 31 targets (81%) for 343 yards (11.1 YPA) and a touchdown in Weeks 8-14.

With Metcalf ($6100, 5-8%) priced not that far away from Chris Carson ($7500, 26-30%), it’s safe to say he be a low-owned option. If you’re looking to fade Carson, both Metcalf and Lockett ($6900, 2-4%) will be incredibly high-leverage options. We think Lockett, although he hasn’t shown it lately, is a better bet when you consider all of the factors. Carson is a viable option in all formats, though we lean towards being underweight in tournaments as there are plenty of pivots at running back in that price range.

Carolina’s season has spiralled out of control, but they still have some excellent fantasy options, in part due to the decline in defensive performance from the beginning of the season until now. Christian McCaffrey ($10,000, 26-30%) is the same strong play he is every week, and shouldn’t be overwhelmingly owned in tournaments. We like DJ Moore ($6600, 5-8%), Curtis Samuel ($4400, 5-8%) and Ian Thomas ($3100, 21-25%) as tournament plays, and think Kyle Allen ($5400, 0-1%) paired with any two of those players should be relatively low-owned with reasonable upside.

4. Scoreless in six straight, Darren Waller is due for positive-TD regression, and his scoring chances are aided by Foster Moreau’s year-ending knee injury; Moreau vultured five end-zone trips in the first 13 games.

Waller ($5500, 5-8%) is checking in as a solid option in all formats, and his touchdown equity is about as high as it’s ever been. If looking for a way off the board large-field GPP play, Tyrell Williams ($4800, 2-4%) who is battling plantar fasciitis, will have a ton of leverage off of Waller. The Oakland running back situation is unfortunate, as it looks like Josh Jacobs ($7000, 2-4%) will go, but the reinjury risk seems pretty high while he’s subject to more playing time risk than normal even if healthy. If Jacobs were to miss, we’d be extremely high on DeAndre Washington ($4700, 2-4%).

The Jaguars are an interesting case of a team that hasn’t been putting up numbers but clearly has the potential to do so, with a favorable matchup and cheap price tags. Leonard Fournette ($7600, 9-12%) should be less than he has been in recent weeks, while Gardner Minshew ($5500, 2-4%) is slightly overpriced, but the rest of his team are top values. We don’t mind stacking Minshew with one or more of Dede Westbrook ($4600, 21-25%), Chris Conley ($3600, 17-20%) or Keelan Cole ($3000, 9-12%). Cole should be lower owned in smaller stakes large-field games, while savvier / higher-stakes players should be well aware of both the opportunity and player.

5. A top-12 fantasy passer in just 3-of-13 starts, Baker Mayfield catches an optimal draw to briefly right the ship in a non-weather-impacted affair versus a Cardinals defense that’s yielded top-ten scores to 10-of-13 quarterbacks faced in addition to NFL highs in completion rate (72%) and touchdown passes (32).

Mayfield’s ($6400, 2-4%) price should keep his ownership in check, giving him some appeal to us in tournaments. The field will be scared off of Odell Beckham Jr. ($6400, 5-8%) due to the awful game log an injury concerns. It’s anyone’s guess as to whether he still has a true ceiling game in his range of outcomes, but if there were ever a week, this is it. Jarvis Landry ($6700, 13-16%) is a solid option, but we’d want to make sure to be contrarian elsewhere if stacking him with Mayfield. With Kareem Hunt ($6300, 0-1%) stealing Nick Chubb’s ($7900, 5-8%) passing game usage and vulturing an occasional TD, we think Chubb’s ownership should plummet and he could be an interesting overpay to be contrarian option in large field GPP’s.