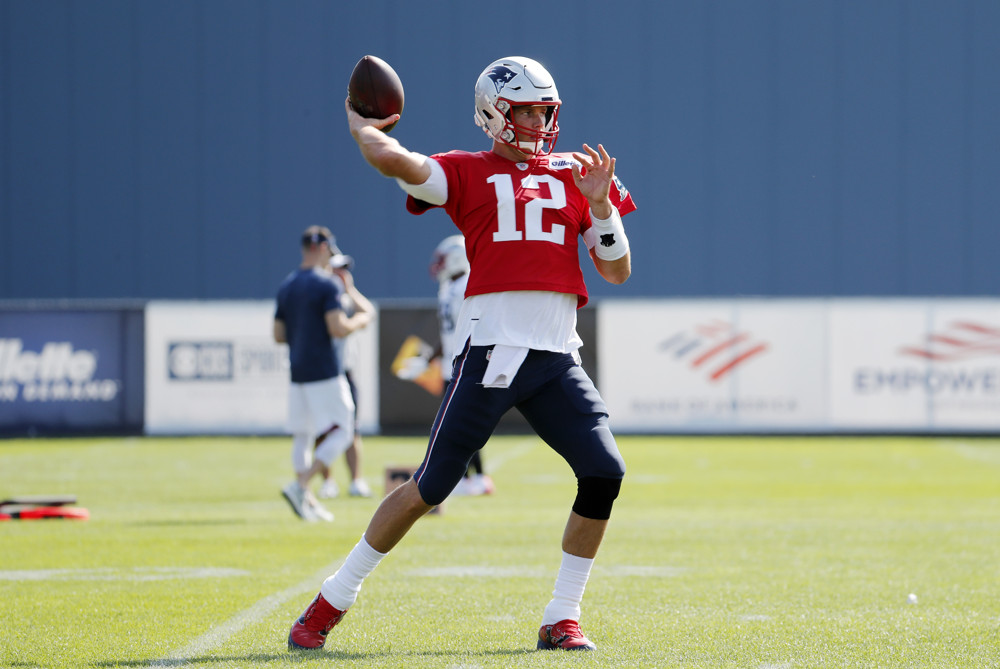 Tom Brady enters his age-42 campaign coming off a solid-if-unspectacular 2018 where he managed QB14 fantasy results – his worst full-season finish since 2013 – and ranked a middling 16th among 38 qualified passers in QB rating when kept clean, a metric that holds year-over-year predictive weight. In a run-heavier Patriots offense than usual, Brady cleared 300 yards in just 5-of-16 regular season starts. He averaged 3.5 more fantasy points per game and a whopping 1.8 more yards per pass attempt in Josh Gordon’s 11 appearances, noteworthy since Gordon was surprisingly reinstated on August 16 and is now eligible to play in Week 1. The Patriots bring back arguably the NFL’s premier offensive line and prioritized their running game and defense in offseason moves, however, and they appear likely to lean run heavier than usual this season. Brady maintains a reasonable floor but is no longer an upside play and should be approached as a fantasy QB2.

Julian Edelman landed a two-year, $18 million extension after earning Super Bowl 53 MVP. Over his last 16 games including playoffs, Edelman has a mouth-watering 105/1,325/6 receiving line on 156 targets, including 85-plus yards and a touchdown in 13 of those (81.3%). As the Pats are missing the NFL’s tenth-most targets from last year’s team, Edelman is positioned for career-high volume with very little at tight end, and raw rookie N’Keal Harry and ex-Colts first-round bust Phillip Dorsett bookending him outside. Edelman reported to training camp with a broken thumb but should be good to go by Week 1. Showing no signs of slowdown at age 33, Edelman is a high-priority season-long draft target near the third-/fourth-round turn.

The Patriots drafted Arizona State’s N’Keal Harry with the 32nd pick after he caught 85% of his targets and prolifically gained 20-plus yards on 44% of his catches as a 21-year-old true junior. Built powerfully (6’2/228) with strong hands and 88th-percentile SPARQ athleticism, Harry was a physical clasher on college tape who averaged 7.1 yards after catch per reception but struggled to create short-area separation and relied on bubble screens and contested grabs to dominate Pac-12 foes. Harry is the only wide receiver Bill Belichick has ever taken in the first round through 20 drafts with New England. Reports on Harry’s early development were mixed all spring and early in camp, however, and he suffered a case of turf toe in New England’s preseason opener. Josh Gordon‘s reinstatement further rendered Harry an undesirable season-long fantasy pick.

Suspended indefinitely last December for violating the league’s banned-substances policy (again), Josh Gordon was nevertheless tendered by the Patriots as a restricted free agent and signed the one-year, $2.025 million deal in April. He spent much of the offseason working out with Brady, a possible sign the Patriots and Gordon’s camp maintain some level of confidence he’ll be reinstated for 2019. Gordon remained an on-field difference maker in 11 appearances last season, pacing the Patriots in yards per target (10.6) and yards per catch (18.0), ranking 14thamong 96 qualified receivers in yards per route run (2.15), and No. 7 among 125 wideouts in yards after catch per reception (6.7). Despite his goose-egg floor, these are the reasons I rank and am willing to draft Gordon multiple rounds ahead of his ADP. AUGUST 16 UPDATE: Gordon was formally reinstated on this date and is eligible to play in Week 1. Accordingly, I hiked him from WR53 to WR26.

Phillip Dorsett, Maurice Harris, Dontrelle Inman, Braxton Berrios, and Demaryius Thomas round out New England’s wideout options. Dorsett appeared in all 16 games last season but earned only 42 targets and ranked 68th among 96 receivers in yards per route run (1.27). In all likelihood, Dorsett just isn’t very good, but the Pats did think enough of Dorsett to re-sign him, he runs 4.33, and he opened camp running with the ones. The Patriots have had success with players like Harris in the past. Albeit unimpressive athletically, Harris has just one drop on 65 career targets and is functional as both an inside and outside receiver. In Washington last year, Harris gained 173 of his 304 yards in the slot (57%). Inman was outplayed by Harris and tiny slot prospect Berrios all spring and early in camp. 31-year-old Thomas tore his Achilles’ last Week 16 and will likely open the season on reserve/PUP.

The Patriots’ top-four post-Gronk tight end options are Matt LaCosse, Ben Watson, Lance Kendricks, and Stephen Anderson. LaCosse inked a two-year, $2.8 million deal after clearing 30 yards in four of Denver’s final seven games. With 4.76 speed at 6-foot-6, 250, LaCosse is catch-first tight end who struggles as a blocker but could be of some fantasy use in tight end-premium leagues as the favorite to start Week 1. 38-year-old Watson briefly retired after spending last season with the Saints, then was lured back to New England on a one-year, $3 million deal. He was suspended four games for PEDs and faces an uncertain future. 31-year-old Kendricks joined the Patriots at the start of camp. He may also draw NFL discipline after pleading no contest to misdemeanor marijuana possession in July. Anderson is an undersized (6’2/230) former wide receiver who spent most of 2018 on New England’s practice squad.

Red flagged by NFL teams before last year’s draft for a bone-on-bone knee condition, 2018 first-round pick Sony Michel underwent an August scope that cost him Week 1. Exceptions being Weeks 8 and 9 due to an aggravation of the injury, Michel went on to play in all but two of New England’s final 17 games, including the postseason. Behind an offensive line that ranked No. 3 in Football Outsiders’ Adjusted Line Yards run-blocking metric, Michel took over as a dynamic early-down rusher by averaging 18.7 touches for 88.3 yards and 4.62 yards per carry with 12 touchdowns over his final 14 games. He drew a measly 0.6 targets per game during that span, however, and is obviously more of a non-PPR than PPR asset. Including playoffs, he managed eight catches in 16 games as a rookie after catching just nine balls in 14 contests as a senior at Georgia. Michel missed all of spring workouts this year following another knee scope but was cleared to practice early in camp. Despite an elite rushing environment and his rookie-year success, Michel is a boom-bust RB2/flex pick with major touchdown dependency in a backfield that got even deeper this offseason.

James White started the 2018 season like gangbusters by averaging 13.4 touches for 85.1 yards with ten all-purpose touchdowns in the Patriots’ initial nine games, only to take a stretch-run backseat while Michel settled in as New England’s bellcow back. White’s averages dipped to 8.6 touches for 58.6 yards with only two scores over the final seven weeks. As one of the NFL’s premier satellite backs, White’s fantasy value skews heavily toward PPR leagues, where he finished as 2018’s overall RB7. He’s averaged 4.4 catches per game over the past three years. White enters 2019 with role security but a lowered ceiling with Michel and Rex Burkhead returning and versatile rookie Damien Harris joining the mix.

The Patriots drafted Alabama’s Damien Harris with the 87th overall pick after Harris started over Raiders first-rounder Josh Jacobs throughout their college careers and averaged 6.4 yards per carry with 52 catches in four seasons. A sort of jack of many trades but master of none, Williams runs 4.57 at 5-foot-10, 216, learned to pass block in the Crimson Tide’s pro-style attack, and handles himself adequately in all phases. Beat writers believe Harris poses a legitimate threat to Michel’s early-down workload, setting up one of fantasy football’s most-important camp battles. Harris is very much worth middle-round flyers in season-long drafts. Rex Burkhead projects as New England’s No. 4 back but should stay active on game days for his special teams prowess. His fantasy appeal depends upon injuries to other Pats backs.

New England’s 2019 Win Total is 11 games, a number they’ve incredibly beaten in eight of the last nine years but drew even with last season. There are no strong regression metrics working in or against the Pats’ favor after last year’s club went 3-2 in one-score games with a robust +111 point differential. This year’s team faces the NFL’s softest schedule based on Opponent Win Totals but returns much less passing-game firepower and didn’t get demonstrably better on either side of the ball, essentially swapping out DE Trey Flowers for DE Michael Bennett and not doing much else. I’m just not at all sold this is a 12-win roster anymore. I’ll take the under and hope New England settles in at ten victories.