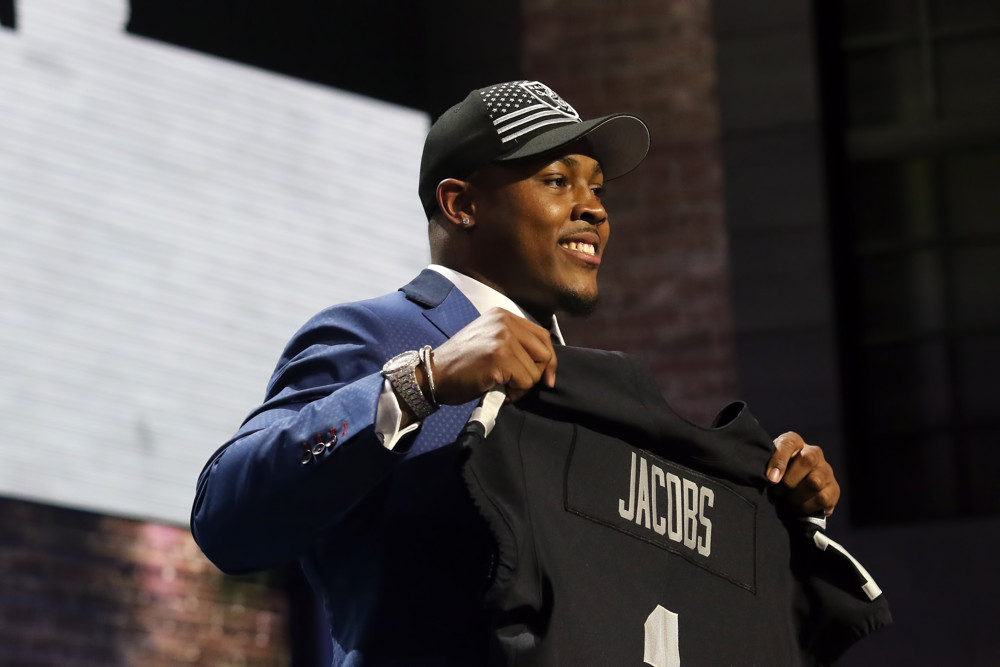 Derek Carr’s first season under Jon Gruden was rocky from a win-loss standpoint, but he established career highs in completion rate (68.9%) and yards per attempt (7.3) in Gruden’s high-percentage West Coast attack. Gruden’s offense wasn’t aggressive or high scoring enough to win shootouts Oakland constantly found itself in, however, by allowing a league-high 29.2 points per game. The Raiders scored 20 or less in 10-of-16 games. Investments into Antonio Brown, Trent Brown, Tyrell Williams, Josh Jacobs, and Richie Incognito better position Gruden’s team to go toe to toe with high-scoring opponents, while Oakland can continue to anticipate playing from behind facing this year’s third-toughest schedule. Carr’s job security should be strong after the Raiders brought in no competition, giving him some QB2 value-pick appeal in year two of the offense with a revamped supporting cast.

Antonio Brown got everything he asked for this offseason with a trade out of Pittsburgh and a three-year, $50.1 million contract with over $30 million guaranteed. Now 31, Brown showed signs of 2018 decline with seven-year lows in yards per route run (1.94) and yards per target (7.7) and an eight-year low in catch rate (61.9%). Receivers changing teams should be red flagged to begin with, while Brown’s downgrade to Carr from future first-ballot Hall of Famer Ben Roethlisberger is significant, particularly in the vertical passing game, where Big Ben is one of the most-aggressive downfield passers of all time. (Carr is the opposite.) Whereas last year’s Steelers ranked first in the NFL in pass attempts and top five in offensive plays, Gruden’s Raiders finished 16thand 24th, respectively. Brown’s target share should be one of the highest in football, but he looks like a boom-bust fantasy pick at his second-round ADP. Brown’s extended early-camp absence due to a strange foot injury and even-stranger helmet dispute with the NFL limited his ability to form an in-practice rapport with his new quarterback.

Tyrell Williams arrived in Oakland on a four-year, $44.4 million deal after an up-and-down four-season stint with the Chargers, where he operated as a complementary role player behind Keenan Allen. Big bodied (6’3/204) with 4.48 wheels, Williams is a run-game asset with just enough vertical and run-after-catch ability to qualify as a passable real-life No. 2 wideout. With Brown now in the Allen role ahead of him, Williams will likely continue to struggle to command consistent targets while downgrading from Philip Rivers in quarterback efficiency. Williams drew just 4.2 targets per game over the past two years.

Darren Waller gets the first crack at replacing 2018 lead pass catcher Jared Cook as a college wideout now playing tight end. Signed off the Ravens’ practice squad late last November, Waller caught all six of his targets for 75 yards in four limited-snap appearances. Talked up by Gruden and OC Greg Olson this offseason, Waller ran 4.46 coming out of Georgia Tech and has bulked up into the 6-foot-6, 250-pound range. Waller has flashed big-play ability in preseasons past and makes for a deep TE2/3 sleeper who should be owned in all Dynasty leagues on a Raiders team that will need to throw to stay competitive.

Other noteworthy candidates for Raiders pass-catching snaps include Hunter Renfrow, Ryan Grant, Luke Willson, J.J. Nelson, and Foster Moreau. A stereotypical slot receiver who started all four years at Clemson, fifth-round rookie Renfrow has a real chance to start in three-wide sets between Brown and Williams as an Adam Humphries clone. Grant signed a one-year, $1 million deal after flopping with Andrew Luck in 2018 and like Willson is on his third team in three seasons. Diminutive Nelson gives the Raiders speed on the perimeter to be used situationally. Taken in the fourth round out of LSU, Moreau posted this year’s third-highest SPARQ score among rookie tight ends behind first-round picks T.J. Hockenson and Noah Fant. Moreau’s pro-ready blocking ability increases his odds of seeing the field.

The Raiders selected Josh Jacobs with this year’s 24th overall pick and immediately tabbed him as their feature back despite Jacobs failing to clear 1,000 total yards in any individual college season. Jacobs was a violent tackle breaker and quality pass catcher at Alabama, however, and his plus blitz-pickup skills popped on tape. In addition to Jacobs’ limited track record, concerns include Oakland’s shaky offensive line and probability of frequently playing from behind against one of the NFL’s toughest schedules, which would threaten Jacobs’ snaps if he doesn’t fully beat out Jalen Richard for passing-down work. Especially after the Raiders lost LG Richie Incognito to a two-game suspension and RG Gabe Jackson to a torn MCL suffered in training camp, Jacobs’ run blocking will likely be among the league’s worst early in the year after he ran behind college football’s best lines with the Crimson Tide. Jacobs has been overvalued in the third round of season-long drafts.

Doug Martin, Jalen Richard, and DeAndre Washington are other candidates for touches should Jacobs fail to earn true bellcow work. Martin re-signed a one-year, $1.02 million deal after a surprisingly competent 2018 in which he finished No. 10 among 47 qualified backs in Success Rate (53%). Richard ranked seventh among running backs in catches (68) and earned a Charlie Garner comparison from Gruden in a semi-breakout year as Oakland’s receiving back. Washington handled a career-low 31 touches and is in danger of not making the 53.

The Raiders’ win projection is 6.0 games, tied for third lowest in the league and a number Oakland has beaten just twice in the last seven years. 2018’s team was every bit as bad as its 4-12 record and perhaps even worse, finishing above expectation in one-score games (4-3) with a brutal -177 point differential and embarrassing -39 sack differential. Even after a considerable offseason talent influx, the Raiders transforming into a seven-win team seems like a long shot considering their schedule. I see Oakland as being closer to a 4-6 win team than a 5-7 win one and am cautiously going under 6.0. At sportsbooks where Oakland’s Win Total has climbed to 6.5, they are a confident under bet.