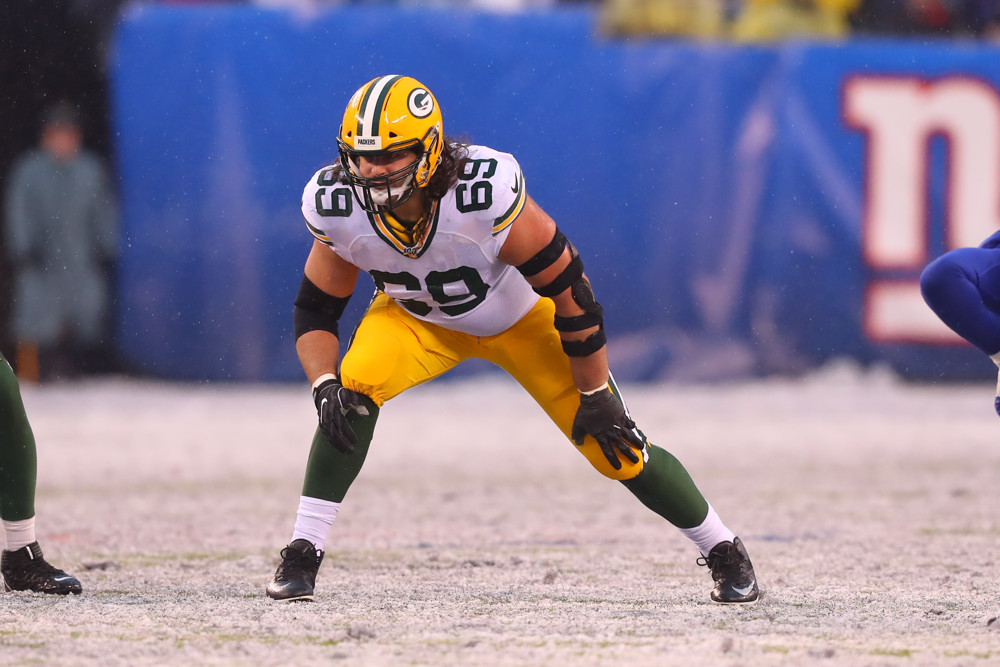 Editor’s Note: With half the season in the books, we’re running a sale. Use promo code PRINTFEST30 to get 30% off your first week or month at ETR, or PRINTFEST40 to get $40 off rest of season purchase. Click here for details.

Editor’s Note 2: Looking for more free content? Check out our YouTube page for strategy, podcasts and lots more. We also have two free podcasts per week, click here for more.

The primary factors I use to arrive at these rankings are my game-film evaluation of each individual offensive lineman and 2020 performance as a unit from Weeks 1-8 — with an eye towards the rest of the season. Some units will be getting key players back from injury as the year progresses, so those returns are factored in. For example: Raiders LG Richie Incognito & RT Trent Brown, Chargers RG Trai Turner, Browns RG Wyatt Teller, 49ers C Weston Richburg & C Ben Garland, Chiefs RT Mitchell Schwartz, Dolphins LT Austin Jackson, Eagles LG Isaac Seumalo, and more.

The Saints had Larry Warford opt out of the season due to COVID-19 concerns and were able to show off their depth by putting in Nick Easton then eventually working in rookie Cesar Ruiz into the right guard position. Ruiz is gradually improving and looks to be a long-term answer inside, giving the team an outstanding swing interior backup in Easton, and with that right guard spot answered the rest of the line has played up to their usual elite level.

Terron Armstead has been the best left tackle in football despite playing with a torn ligament in his hand that required surgery on the team’s bye in Week 6 while Ryan Ramczyk has been dealing with a nagging knee injury that has sapped some of his explosiveness and strength, but still remains a very good, top five right tackle in the league. This is still very clearly the best unit in the league.

The Bucs offensive line has catapulted into elite territory primarily because rookie right tackle Tristan Wirfs has been an absolute stalwart on the right side and the best player in the NFL at his position through eight games. I expected Wirfs to be a good pro, but not this good this fast.

Another factor is the Bucs line is the only group in the NFL that has had all five starters play at least 90% or more of snaps together this season (all starters have played 98% or more snaps).

Inside of Wirfs Alex Cappa has been steady for the vast majority of snaps this season and his continued ascension into a solid starter has really solidified the right side of the line which was the biggest unknown of the group heading into the year.

As expected, Donovan Smith has been the weak link of the unit, but has been serviceable largely due to Tom Brady’s mastery of depth and spacing in the pocket which has really aided in covering up the minor weaknesses this line does have.

Green Bay’s line has been expectedly excellent on the left side even though David Bakhtiari has missed the last couple of games but the surprise has been the solid play they’ve gotten from the right side, beginning with Lucas Patrick at right guard. Coming into the year I had never watched Patrick play, but have since studied his game and his competitive toughness, active playing style has been a help in pass-protection and given them a solid run-blocker.

Billy Turner and Rick Wagner have each started at right tackle and are below average players that can be exposed against top competition but on a line with such a strong trio in Bakhtiari, Elgton Jenkins, and Corey Linsley, the coaches have plenty of freedom to cover their warts with the scheme and weekly game-plan when needed.

Pittsburgh continues to be an excellent line despite several factors working against them this season that they’ve impressively been able to overcome. David DeCastro has only played in about half the snaps this season but the team has gotten incredible performances in spot duty from rookie fourth round pick Kevin Dotson. Matt Feiler switched positions from right tackle to left guard and has been very good as a run-blocker and solid as a pass-protector. Lastly, Chukwuma Okorafor is starting for the first time in his career and despite being the weak link of the unit has still been adequate, which is fine with the strengths everywhere else on the line. There’s also the Ben Roethlisberger factor and his return being a big help in pass-protection (getting rid of the ball on time) and run-blocking (having the threat of a legitimate passing game).

The Colts’ line hasn’t quite lived up to expectations this season but with Philip Rivers emergence over the last few weeks after a slow start should go a long way in opening up the offense and especially the running game. Through eight games the Colts have the 22nd ranked rushing offense per Football Outsiders’ DVOA, but starting running back Jonathan Taylor also has faced the 2nd most 8+ man boxes out of all runners with at least 100 carries largely due to the slow start of the passing game early in the year.

Strictly from a personnel angle and how each player looks on tape, this is a very good unit that still have three very good or better players in Anthony Castonzo, Quenton Nelson, and Ryan Kelly that they can depend on to be consistent on a weekly basis.

As mentioned in the preseason rankings of this article, the right side is the weak link of the unit, particularly right guard Mark Glowinski, and while they’re adequate with some good traits as run-blockers, they both can be taken advantage of against top competition and will continue to need extra attention from the scheme moving forward.

Through the first quarter of the season this was an elite unit up there with New Orleans and Tampa Bay but then right guard Wyatt Teller went down with an injury that he has yet to return from, dropping them down a tier.

Nonetheless, they remain a very good group (3rd in adjusted line yards) thanks in large part to rookie left tackle Jedrick Wills Jr.’s smooth transition from the right to left side. Wills has had some bumpy moments in games (Week 1 vs. Baltimore, Week 5 vs. Justin Houston, Week 6 vs. Bud Dupree) but overall has been a good starter with very promising returns on his young career.

Jack Conklin’s technical flaws in pass-protection have gotten exposed a few times this year as well (namely Week 6 vs. T.J. Watt) but he remains a force in the run game and good fit in the Browns diverse scheme.

If Teller picks up where he left off whenever he returns (he’s week to week) then expect this Browns line to elevate themselves into the exclusive ‘elite’ tier pretty quickly.

The Raiders line has been very good this season and considering they haven’t had elite starting left guard Richie Incognito since Week 2 makes their performance incredibly impressive. Add in the fact that right tackle Trent Brown has missed five starts, the team has had the league’s toughest schedule per Football Outsiders, and there’s a case for this coaching job from Jon Gruden and Tom Cable being one of the most impressive in the NFL this season.

Replacement guard Denzelle Good has been a career backup prior to this season but has seven starts in place of Incognito and has been outstanding all things considered. This line is the biggest in the NFL based on average weight per player (339 pounds) and it works well with the offense’s efficient passing game since defenders have enormous obstacles to work around in such a short amount of time, not to mention the benefits late in games when they can lean on defenders and wear them down physically (Ex: Week 8 vs. Cleveland).

If Brown and Incognito can be consistent performers again this season chances are they will be worthy of being inserted into the elite tier.

The Patriots have maintained their status as a top ten unit (5th in adjusted line yards) despite having five different starting lineups this season, a testament to tremendous coaching but also thanks to rookie sixth round pick Michael Onwenu’s rare ability to step in and start at three different positions effectively throughout the season. Onwenu’s versatility and above average skill-set has been one of the biggest revelations of the season regarding line play and his performance has been a key cog in the overall effectiveness of the Patriots offense.

As the unit continues to work Shaq Mason back into the lineup, Onwenu could be regulated to the bench and used as a 6th blocker in heavy sets as he was early in the year before the injuries, but it’s also possible he can take over at right tackle full-time, giving the Patriots time to evaluate whether or not he is the long-term answer there. My money would be on Onwenu being the future at left guard though since Joe Thuney is set to hit the market in the off-season and Onwenu’s skill-set is ideally suited inside. Regardless of how they utilize the promising rookie, New England has peace of mind few other teams have when it comes to losing a starter because of his versatility.

The Rams are 2nd in adjusted line yards and are one of the few teams in the NFL with four starters who haven’t missed a snap this season. No team has been a bigger surprise or made a bigger jump from my preseason expectations than this unit. Aaron Kromer has long been one of the premier position coaches in the NFL but what he has spearheaded this season in getting this group to gel this quickly has been remarkable.

The biggest surprise that nobody really saw coming is the rapid development of both starting guards in David Edwards and Austin Corbett. Those two have each been playing at a solid level while Rob Havenstein has largely bounced back to the same level after an erratic 2019 season.

Head coach Sean McVay’s scheme is extremely OL-friendly given the extensive use of play-action and misdirection pre-snap to create advantageous angles and leverage for the blockers, but credit needs to go to the guys up front because the scheme was in place last year too and the returns weren’t nearly as positive as they are so far this year. That’s driven in large part because of the work being done in the trenches.

The Lions have been a surprisingly good unit this season despite extensive shuffling of the lineup due to injuries thanks in large part to the best season from Taylor Decker in multiple years, rookie Jonah Jackson being solid right out of the gate at both guard spots (six starts at left guard, two at right guard), and Tyrell Crosby being a functional starter at right tackle.

As long as the unit can keep the trio of Decker, Jackson, and Frank Ragnow in-tact they should be an above average unit and middle of the pack one at worst for the rest of the season, with Joe Dahl, Halapoulivaati Vaitai, and Tyrell Crosby manning two of the remaining spots on the right side.