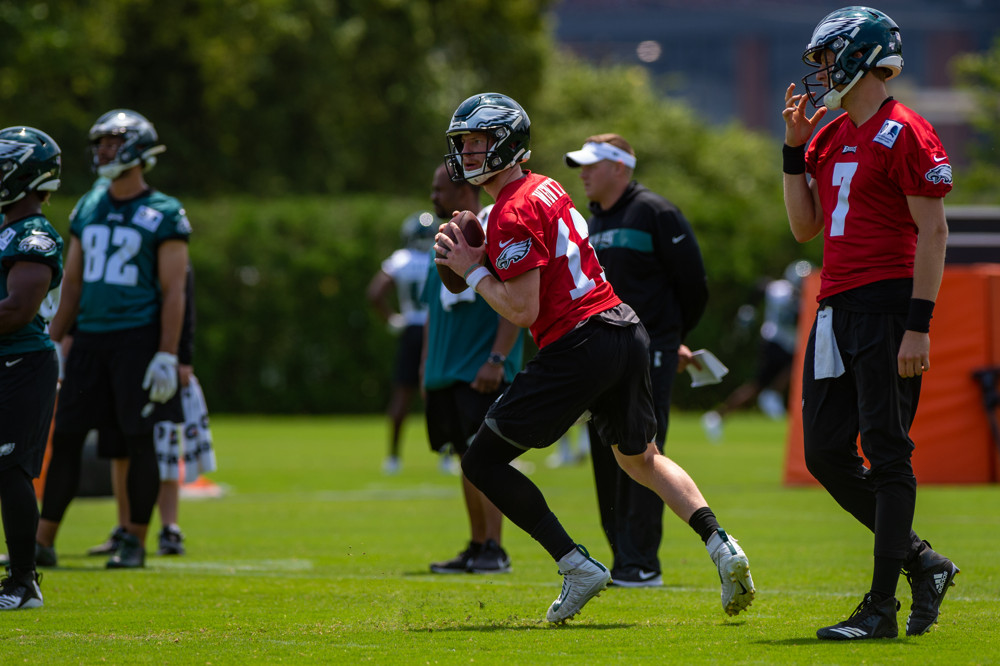 Carson Wentz landed a four-year, $128 million extension after setting career highs in completion rate (69.6%), yards per attempt (7.7), and passer rating (102.2) as a third-year pro. The Eagles eased Wentz into the 2018 season coming off ACL and LCL tears, starting Nick Foles in Weeks 1-2 before turning to their franchise quarterback in Week 3. Wentz was fantasy’s QB14 until doctors diagnosed him with compression fractures in his back, forcing the Eagles to shut down Wentz for Weeks 15-17 and the playoffs. Wentz did avoid surgery, and the club’s monetary commitment to him along with Foles’ departure suggest minimal future concern with Wentz’s back. Savvy GM Howie Roseman has surrounded Wentz with the deepest supporting cast in the game, while Philly has finished top eight in play volume and top 15 in pass attempts in each of Doug Pederson’s three years as coach. An aggressive tight-window passer who can pad his stats with rushing value, Wentz offers top-five QB1 upside if his health cooperates.

Alshon Jeffery enters his age-29 campaign coming off a rare surgery-free offseason after missing last year’s first three games due to a torn rotator cuff, then recording a combined 76/988/6 (13.0 YPR) receiving line in 15 appearances, playoffs included. As Wentz is so willing to attack tight windows, separation-challenged Jeffery has averaged 2.5 more targets per game with Wentz in the lineup over the past two years. Jeffery hasn’t cleared 850 yards since 2014, however, and his ceiling is limited by his somewhat one-dimensional game in an ultra-deep Philly pass-catching corps. Postseason included, Jeffery has reached 100 yards twice over his last 45 games. Ultimately, Jeffery is a largely touchdown-reliant fringe WR3 without a ton of room for box-score growth barring a sudden pay-dirt explosion.

DeSean Jackson returns home to Philly after a two-year Tampa Bay hiatus where he led the NFL in yards per catch (18.9) and showed no tangible signs of slowdown last season, finishing top ten in both yards per route run (2.27) and yards gained on 20-plus-yard targets (374). Fantasy concerns for Jackson include his target volume and Wentz’s come-and-go deep accuracy, a part of Wentz’s game with which he struggled in college and two of his first three NFL seasons. Nevertheless, Jackson makes for an outstanding best-ball pick due to his spiked-week ability, and his addition bodes especially well for Wentz. Kirk Cousins, Donovan McNabb, Nick Foles, Ryan Fitzpatrick, and Robert Griffin III have all experienced enhanced career yards per attempt and touchdown rates in games played with Jackson.

Zach Ertz is a 2019 regression candidate after setting 2018 career highs in targets (by 44) and catches (by 38), capitalizing on Jeffery’s early-season absence and the Eagles’ lack of consistent Nos. 2 and 3 receivers. As Ertz is not necessarily a big-play threat – he wins with elite route running and averages just 11.0 career yards per reception – his fantasy output is more volume reliant than first-tier tight ends Travis Kelce and George Kittle, making any potential target loss a concern. No. 2 TE Dallas Goedert, rookie J.J. Arcega-Whiteside, and a healthy Jeffery further pose challenges to Ertz’s scoring-position usage after he finished fourth and first among tight ends in red-zone targets the past two years. Even as my No. 3 fantasy tight end, Ertz is going a round or two earlier than he should in season-long drafts.

Nelson Agholor, Dallas Goedert, and J.J. Arcega-Whiteside round out a pass-catching cast so loaded the Eagles could conceivably run two-tight end 12 personnel orthree-receiver 11 as their base offense. Last year’s team ran 12 at a league-high rate (35%), yet it still wasn’t enough because it was one of the most-efficient personnel packages in football. Slot man Agholor took a 2018 step back and was the subject offseason trade rumors. Goedert’s box-score ceiling is capped behind Ertz, but he is already one of pro football’s best blocking tight ends and deserves more playing time after finishing 30that the position in snaps. The 57thpick in April’s draft, Arcega-Whiteside is a physical contested-catch specialist at 6-foot-2, 225 and Jeffery’s heir apparent. Arcega-Whiteside was the Eagles’ most buzzed-about rookie at OTAs.

Miles Sanders went to Philadelphia with the 53rd overall pick after breaking free from Saquon Barkley’s Penn State shadow for a 220/1,274/9 (5.8 YPA) rushing line and 24 receptions while finishing eighth in the nation in yards after contact per carry (3.7). At 5-foot-11, 211 with 4.49 wheels, Sanders’ Speed Score lands in the 81stpercentile. A high-energy jump cutter in the Devonta Freeman mold, Sanders will need to fix college ball-security lapses to hold off a deep group of competitors in a Philly backfield that has leaned RBBC under Doug Pederson. Sanders also fell behind by missing minicamp with a hamstring injury. Jay Ajayi averaged 14.4 touches over his final ten games as an Eagle, and that would be a reasonable target for fantasy leaguers willing to take a shot on Sanders’ upside in the sixth-round range.

Jordan Howard went from the Windy City to the City of Brotherly Love for a 2020 sixth-round pick and is penciled in as the Eagles’ short-yardage and clock-killing back. Painfully deficient in the passing game, Howard has caught just 67% of his career targets with 14 drops. As Howard’s one dimensionality makes him easier to defend, his yards per carry have dipped annually (5.2 > 4.1 > 3.7), and Howard’s yards after contact per rushing attempt (2.5, 2.7) haven’t rebounded to his rookie-year rate (3.0). Howard’s fantasy-friendly environment and probably-secure role give him touchdown-driven appeal in non-PPR leagues, but Howard’s weekly floor is basement low, and Sanders is clearly the future of Philadelphia’s backfield.

Corey Clement, Wendell Smallwood, Josh Adams, Boston Scott, and Darren Sproles will vie for two roster spots with Clement as the tentative favorite for No. 3 duties based on his special teams value. A popular 2018 sleeper after his 108-yard effort in Super Bowl 52, Clement’s season was derailed by quad and knee injuries that cost him five games and limited him in others. Smallwood logged 115 ineffective touches in 2018, and beat writers have projected he won’t make the team. At 5-foot-7, 195, Scott is a jitterbug on the Jacquizz Rodgers spectrum. Pederson has mentioned Scott in the same breath as Sproles, who turned 36 in June and re-signed a one-year deal just before the start of training camp. Sproles missed ten games due to injury last season and struggled with 60 yards on 21 touches in two playoff games. He had been contemplating retirement.

Philadelphia’s win projection is 9.5 games, the NFL’s fifth-highest total but one the Eagles have beaten just once in the last four years. Last year’s Eagles were devastated by injuries on both sides of the ball, and this year should experience positive regression. Also working in Philly’s favor is 2019’s third-softest schedule based on Opponent Win Totals. 2018’s injuries fostered depth by forcing young players onto the field who weren’t supposed to play, and GM Howie Roseman stayed highly aggressive with the playmaking additions of DeSean Jackson, Malik Jackson, Miles Sanders, Vinny Curry, Jordan Howard, and Zach Brown, plus first-round LT Andre Dillard to deepen one of the league’s top lines. Ultimately, the Eagles are simply too talented and well run for me to consider anything other than the over on 9.5.