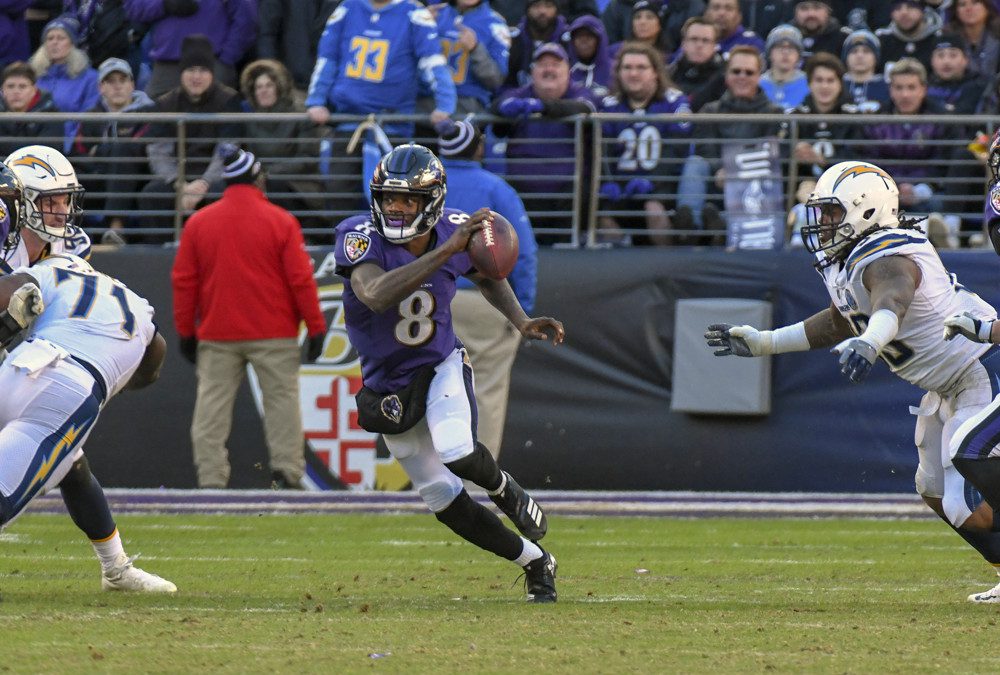 Lamar Jackson replaced Joe Flacco last Week 11 and was fantasy’s QB8 thereafter, not once exceeding 25 pass attempts before the playoffs but averaging 17 carries for 79.7 rushing yards per game. Jackson averaged a respectable 7.1 yards per pass attempt with a 6:3 TD-to-INT ratio across seven starts despite learning on the fly surrounded by a wideout corps that was overhauled this spring. Although Jackson’s passing performances were largely unpretty – he ranked 37th among 38 qualified quarterbacks with a 33.3% off-target throw rate – Jackson’s completion rate rose in each of his three years at Louisville (54.7% > 56.2% > 59.1%), and he maintains ample room for growth following his first full NFL offseason of first-team reps. Greg Roman’s move from assistant head coach/tight ends to offensive coordinator may also bode well. Fellow dual threats Tyrod Taylor and Colin Kaepernick had career years on Roman’s watch, and Roman’s highly creative and committed run-game background suit Baltimore’s personnel. Jackson’s ceiling-floor combination makes him one of this year’s most-enticing late-round quarterbacks.

The Ravens made Marquise Brown this year’s No. 25 overall pick after the 5-foot-9, 166-pound burner averaged 18.3 career yards per catch at Oklahoma as Baker Mayfield, then Kyler Murray’s go-to guy. Antonio’s little cousin, Marquise led all of college football in 50-plus-yard catches (14) over the course of his two years as a Sooner, then drew pre-draft comparisons to DeSean Jackson and T.Y. Hilton. Brown underwent Lisfranc surgery in February but is expected to be ready for training camp. Although Baltimore’s run-heavy nature and Jackson’s rookie-year inaccuracies threaten Brown’s week-to-week consistency, he is ripe with opportunity in an offense missing the NFL’s second-most targets (296) and Air Yards (2,879) from last year’s team. Brown is best viewed as a high-variance WR5/6 best-ball pick.

Third-round pick Miles Boykin, fourth-year holdover Chris Moore, and slot man Willie Snead will vie for complementary targets in a low-volume passing offense that is unlikely to support more than one or two fantasy-relevant contributors. Boykin notched one of the highest SPARQ scores in NFL Combine history after blazing 4.42 with an absurd 43 1/2-inch vertical and 6.77 three-cone time at 6-foot-4, 220. On Notre Dame tape, Boykin landed on the Devin Funchess-Vincent Jackson spectrum as a high-ceiling developmental prospect with only one year of big-time college production caused in part by shoddy Irish quarterback play. Moore has failed to translate the field-stretching skills he did at the University of Cincinnati, managing 11.1 career yards per reception on 44 catches through three NFL seasons. Snead’s per-game target average sank from 7.7 with Flacco quarterbacking to 3.7 in Jackson’s seven starts.

2018 third-rounder Mark Andrews stepped forward as the Ravens’ lead tight end as a rookie, finishing fifth at the position in yards per route run (2.01) and establishing the best rapport with Jackson among Baltimore’s pass catchers. Andrews’ 552 yards were fifth most by any rookie tight end in the last decade, and his 16.2 yards per catch ranked second behind only O.J. Howard’s 16.6 last year. Andrews also led the Ravens in targets (7) in their playoff loss to the Chargers. 2018 first-round pick Hayden Hurst’s role will expand after an injury-plagued rookie campaign, but Andrews is the preferred late-round fantasy dart. With 4.67 speed at 6-foot-5, 256, Andrews is a field stretcher with big-play ability in the seams.

The Ravens signed Mark Ingram to a three-year, $15 million deal to upgrade on last year’s stretch-run triumvirate of Gus Edwards, Kenneth Dixon, and Ty Montgomery, who combined to dominate on the ground with Jackson’s dual threat freeing up lanes. Albeit a superior talent, Ingram best profiles as Edwards’ replacement after undrafted rookie “Gus Bus” averaged 17.5 carries in Jackson’s starts. And Baltimore is missing the league’s second-most carries inside the five-yard line (13) from last year’s team. Lead back in what projects as the NFL’s run-heaviest offense, Ingram’s primary fantasy concern is his passing-game usage. Likelier to scramble than check down when his reads are covered, Jackson targeted running backs just 3.6 times per start and on just 15% of his 2018 attempts. For perspective, ex-Ingram QB Drew Brees targeted backs 8.8 times per start and at a 29% rate. Ingram’s scoring-position usage is also threatened by Jackson, who finished eighth in the NFL in red-zone carries (37) in only seven starts.

Although Edwards and Dixon return – Montgomery went to the Jets in free agency – the Ravens’ second most-intriguing fantasy back is fourth-round pick Justice Hill, who played over Seahawks starter Chris Carson as a true freshman at Oklahoma State before turning pro with a 5.6 career yards-per-carry average and 49 catches. Hill destroyed the Combine for No. 1 SPARQ results among drafted running backs, blazing 4.4-flat with an explosive 10-foot-10 broad jump at 5-foot-10, 198. A suped-up version of Austin Ekeler, Hill is capable of adding dynamism to a Ravens tailback corps that lacked it all last year. Gus Edwards and Kenneth Dixon remain on the roster and will compete with Hill for No. 2-back work.

The Ravens’ 2019 Win Total is 8.5 games after Lamar Jackson led them to a 6-1 regular season finish before January’s one-score playoff loss to the Chargers. As Baltimore’s team philosophy couldn’t be more transparent, their 2019 win-loss outcome will hinge heavily on Jackson’s ability to improve his passing efficiency and Baltimore’s ability to manufacture pass rush after losing Terrell Suggs and Za’Darius Smith, who combined for 36% of the Ravens’ 2018 sacks and weren’t exactly adequately replaced. All five offensive line starters return from a unit that last year ranked No. 9 in Football Outsiders’ Adjusted Line Yards. Baltimore’s schedule is unimposing, rated No. 12 based on Opponent Win Totals. I have the Ravens with an 8-10 win projection rather than a 7-9 win one and am taking the over on 8.5 victories.