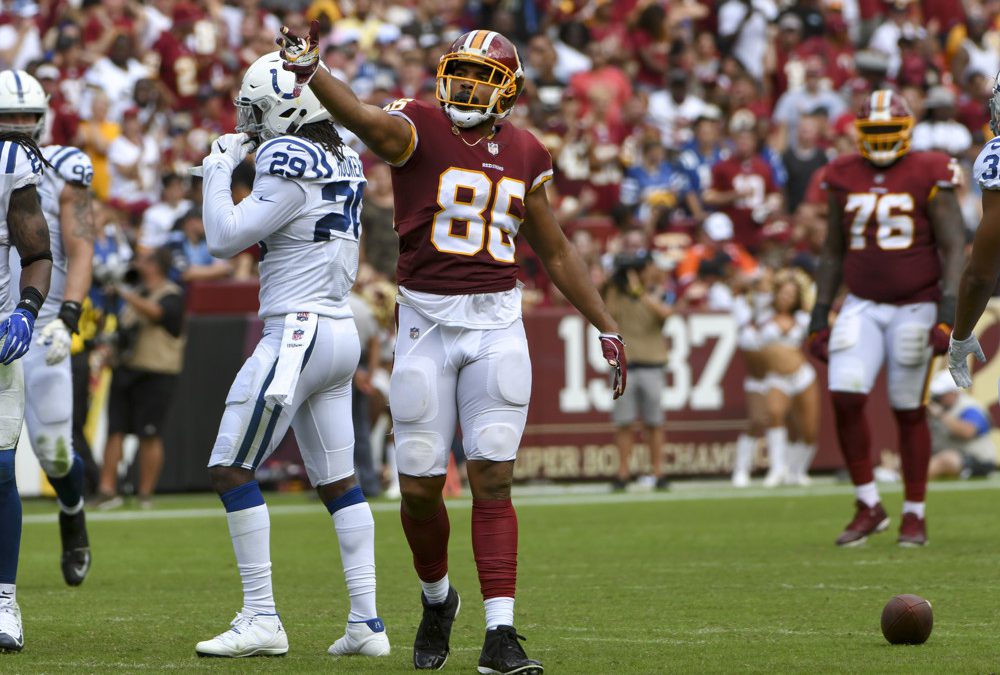 Case Keenum and Dwayne Haskins will wage a training-camp battle Haskins should win after destroying college football for a 50:8 TD-to-INT ratio and 13-1 record in his lone season as Ohio State’s starter. Albeit at the alleged demand of clueless owner Dan Snyder, the Skins reportedly considered trading up as high as No. 4 for Haskins, only for him to imaginably fall into Washington’s No. 15 overall lap. Still, the Redskins could feasibly open the season with Keenum starting as a means of “easing Haskins in.” Of the 22 quarterbacks drafted inside the top-15 picks over the last decade, however, 11 (50%) have started Week 1 of their rookie years. From a fantasy football standpoint, Haskins’ lack of rushing prowess and weak pass-catching cast cap his near-term upside. He shouldn’t be a priority in Dynasty or re-drafts.

Josh Doctson, Paul Richardson, Trey Quinn, and rookies Terry McLaurin and Kelvin Harmon will vie for receiver snaps amid probable quarterback controversy. Quinn’s usage looks most secure as Jamison Crowder’s slot replacement, a role for Quinn which Jay Gruden has endorsed multiple times. Quinn is a legitimate candidate to lead Washington in targets after dominating as SMU’s interior complement to Courtland Sutton, then catching 9-of-10 regular season targets for 75 yards and a touchdown as an NFL rookie. Doctson enters his fourth season after struggling to get open and create any yards after catch in the first three. The Skins declined his 2020 option. McLaurin was a vertical blazer at Ohio State, Harmon a plus-sized possession guy with strong hands at NC State. Quinn is the PPR target in this corps.

Jordan Reed battled painful toe injuries on both feet that stunted his big-play game last year, finishing below 7.0 yards per target for the second straight ailment-plagued season after clearing 7.0 YPT in each of his first four. Reed now returns from a rare non-surgery-impacted offseason with minimal target competition on a team that appears likely to play from behind. 35-year-old No. 2 tight end Vernon Davis became much less of a factor as Reed’s health relatively improved. Even if Reed’s foot problems have cost him athletically, Reed maintains a high probability of leading Washington in passing-game targets. He’s been undervalued in spring and summer season-long drafts.

Derrius Guice went from the 59thpick in last year’s draft to injured reserve when Guice tore his ACL last August 10, then required three additional surgeries for setbacks and infections in his recovery. Since, reports about Guice have been mixed, yet his single-digit-round ADP continues in a near-certain RBBC where Guice is no lock to upend Adrian Peterson, and Chris Thompson will handle passing-down work. Fourth-round pick Bryce Love (foot) looks likely to open the year on reserve/PUP. On a bad team with committee aspirations, this is a situation to fade in fantasy leagues.

The Redskins’ 2019 Win Total is 6.5, a number they’ve beaten in four straight seasons. Washington is especially lightly equipped offensively this year, however, with pass and run games uninspiring enough that a potentially underrated defense probably won’t compensate. The Skins are also at risk of win-loss mean regression after last year’s team went 4-2 in one-score games, while Washington severely outkicked its -78 point differential with a 7-9 overall finish. With a rookie quarterback taking over sooner rather than later, Washington’s infrastructure forebodes a four-to-six win team. Late-season tank mode is also squarely in play with Jay Gruden heavily rumored to be in his final year as head coach.