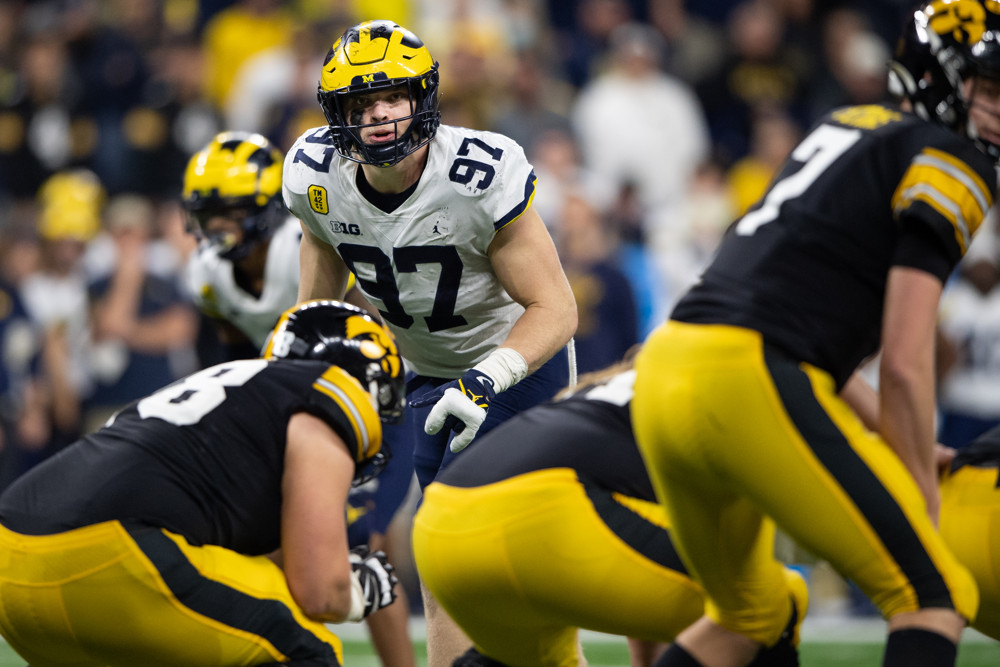 NOTE: USFL starts April 16! We are covering it fully with projections, live shows, top plays, and much more. Click here for details.

I’ve spoken to several football analysts with documented histories of mock draft accuracy over the past few days, and almost all have echoed the same sentiment:

This is the most wide-open first round they can remember.

Here’s my first crack at predicting it:

Momentum has built for Walker to Jacksonville of late, based largely on the notion GM Trent Baalke prioritizes athletic traits above all else. At 6-foot-5, 272, Walker banked 92nd-percentile-or-better results in the 40-yard dash (4.51), three-cone drill (6.89), and broad jump (10’3”) in Indianapolis. Walker managed 9.5 career sacks and 13 tackles for loss across three seasons in Athens, however, and would be one of the most projection-driven No. 1 overall draft picks in the history of the league.

Dan Campbell’s club should be happy with either Walker or Hutchinson falling into its lap at a glaring position of need. Last year’s Lions finished bottom three in sacks (30) and bottom two in QB hits (63). Hutchinson has drawn comparisons to stud pass rushers of the past, Jared Allen and Chris Long.

Recent narratives surrounding Thibodeaux’s stock are shrouded in negativity, but Lovie Smith is the exact type of leader capable of coaching him up. Still among this draft’s most gifted players, Thibodeaux piled up 35.5 tackles for loss and 19 sacks in 32 college games. Pass rush is a colossal need in Houston.

A full-season starter at left guard, right tackle, and left tackle during his three years in Tuscaloosa, Neal’s flexibility would give the G-Men options as Brian Daboll designs his new offense. At 6-foot-8, 337 with 34-inch arms and 40 starts in the SEC, Neal profiles as a safe bet to address New York’s forever OL need.

Bereft of second- and third-round picks, Carolina’s desire to trade down is among the league’s worst-kept secrets two weeks before the draft. But I’m not projecting trades in this mock and lack confidence in the Panthers’ willingness to take Kenny Pickett or Malik Willis this high. Their offensive line is a mess.

Johnson transferred from Georgia to FSU for his final college season and earned ACC Defensive Player of the Year honors via 12 sacks and 18 tackles for loss. 2021’s Falcons ranked dead last in sacks (18) by an 11-sack margin, and no NFL defense registered fewer quarterback hits (58).

Beloved by NFL scouts for his playmaking ability and character, Lloyd crushed the pre-draft interview process after netting 43 tackles for loss, 15.5 sacks, and three pick-sixes in four years at Utah. Lloyd is my pick to be this year’s college prospect drafted far earlier than expected. I can envision old-school coach Pete Carroll falling for Lloyd as Bobby Wagner’s replacement.

Even after a disappointing finish to the 2021 season and forty time allegedly run in the low 4.7s at Notre Dame’s Pro Day, Hamilton has remained a top-five player in NFL Network analyst Daniel Jeremiah’s rankings. Jeremiah and Jets GM Joe Douglas are known to be tight — they came up together as Ravens scouts — and Gang Green is needy at safety after losing Marcus Maye to the Saints.

This draft’s most dynamic receiver, Williams scored 15 TDs on 79 receptions and hit paydirt twice as a kickoff returner in his final college season, only to tear his ACL in Alabama’s national championship loss. Yet all signs point to Williams making a smooth recovery. Drafting Williams to bookend Terry McLaurin would increase Washington’s (long) odds of making good on its questionable Carson Wentz investment.

Arguably the best cover corner in the country as a 2019 freshman, Stingley appeared in only 10 games over the past two seasons due to an illness and various injuries. The Vikings should feel more confident than most teams in adding Stingley because they can pair him with LSU ambassador Patrick Peterson.

LT Ronnie Stanley has appeared in seven games over the past two years due to ankle and knee injuries. RG Kevin Zeitler is 32. Left guard and center are up for grabs. Penning looks and plays like a Raven.

At 6-foot-4, 219 with a dominant contested-catch résumé, London would stylistically complement slender route technician DeVonta Smith. The Eagles seem hellbent on giving up on Jalen Reagor.

Offensive tackles with Air Raid backgrounds give NFL teams cause for pause, but Cross can protect the passer, and the Saints are hurting on Jameis Winston’s blindside after losing Terron Armstead to Miami.

Smallish but explosive, aggressive, and fearless, McDuffie shined as both a perimeter and slot defender at Washington. The Eagles are wafer-thin at cornerback behind 31-year-old Darius Slay.

Pickett’s draft-slot projection is all over the place as a Kirk Cousins clone perceived to possess a limited ceiling. Yet in this scenario, the Saints would have to feel compelled to pull the trigger on arguably 2022’s top quarterback prospect. Pickett’s physical limitations could be mitigated in the Superdome.

The Steelers’ interest in Willis has been telegraphed for months. Overseeing his final draft as Steelers GM, my expectation is outgoing front-office shot caller Kevin Colbert will leave this organization in better quarterback shape than Mitchell Trubisky firmly topping the depth chart.

Karlaftis is a power rusher with Belichickian traits.

Can inherit some of Davante Adams’ old screen-game and back-shoulder targets.

With LG Connor Williams (Dolphins) and RT La’El Collins (Bengals) gone, and LT Tyron Smith and RG Zack Martin on their career back nines, Johnson would profile as an immediate starter at left guard and help stabilize the long-term outlook for a declining position group.

I’m ignoring buzz Buffalo goes running back in Round 1; analytically-sound GM Brandon Beane knows better. No. 1 CB Tre’Davious White is coming off a late-season ACL tear, while No. 2 Levi Wallace left in free agency. Plus sized (6’0″/194) with takeaway skills and extensive press-coverage experience, Booth likely would be drafted earlier if not for core muscle surgery that could cost him part of training camp.

Tennessee can save nearly $18 million by cutting Ryan Tannehill after 2022. Corral is a dynamic athlete and accurate passer with a lightning-quick release. He warrants comparisons to Tony Romo.

Tampa lost first-team OGs Ali Marpet (retirement) and Alex Cappa (Bengals) this offseason. Smith profiles as a day-one starter on the interior who can take over at right tackle once RT Tristan Wirfs inevitably supplants Donovan Smith on the blindside.

Undersized (5’11/229) playmaker was a ubiquitous presence in the SEC.

Ridder’s inconsistent ball placement renders him a fringe first-round talent. But he deserves top-32 attention after winning 44 games, rushing for 28 touchdowns, and netting a career 145.8 passer rating in four seasons at Cincinnati. By all accounts, Ridder crushed the pre-draft interview phase.