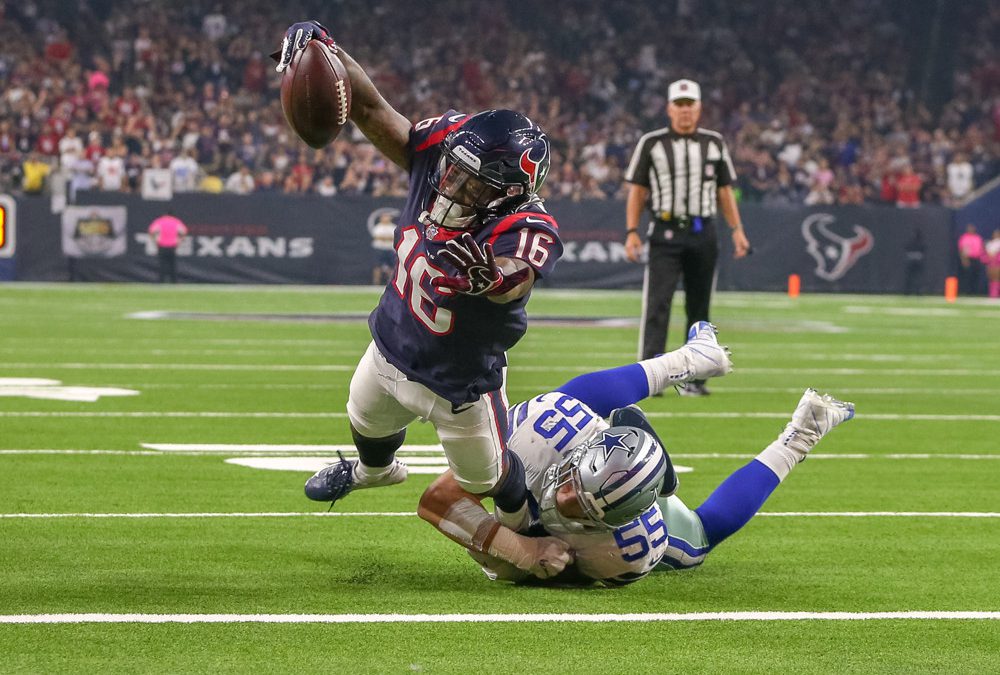 1. Bears WR Allen Robinson – An obvious 2018 fade coming off an ACL tear and changing teams, Robinson enters prime buy-back position as a post-hype target in his second year under creative coach Matt Nagy with ascending Mitchell Trubisky at quarterback. Barely 26 – he just turned on August 24 – Robinson’s receiving line is 79/1,126/5 (14.3 YPR) over the last 16 games in which he played at least ten snaps. Furthering the Bears’ passing-game case is the likelihood Chicago’s defense takes a post-Vic Fangio step back, forcing more onto Trubisky and Robinson’s plates. At his ADP, Robinson is going at least a round later than his talent and situation warrant. Robinson is also a player to target in buy-low Dynasty trades.

2. Cardinals WR Christian Kirk – A relative veteran to rookie coach Kliff Kingsbury’s offense after playing in a similar Air Raid spread at Texas A&M, Kirk still isn’t getting enough ADP love from fantasy drafters. Kirk’s 1.90 yards per route run from the slot ranked No. 2 among rookie receivers who drew at least 20 slot targets in 2018, and his slot usage is certain to rise in Kingsbury’s four-wide attack. (Kirk played inside only 30% of the time as a rookie.) Kirk’s dynamism with the ball in his hands will come in handy on Kingsbury’s trademark catch-and-run quick hitters; Kirk scored seven return TDs in three years at College Station and ranked 28th among 125 qualified receivers in yards after catch per reception (5.3) last year.

3. Saints RB Latavius Murray – The Saints landed Murray on a four-year, $14.4 million deal to tag team with Alvin Kamara in the old Mark Ingram role, in which Ingram averaged 13.3 touches and scored seven TDs in 12 games last year. Murray upgrades from a 2018 Vikings line that ranked 23rd in Football Outsiders’ run-blocking metric to a Saints front five that returns 4-of-5 starters after finishing No. 2. At 6-foot-2, 223, Murray is a back numerous coaching staffs have identified as potent in scoring position, evidenced by Murray’s 53 carries inside the ten-yard line over the past three seasons. On a Saints team that has leaned more toward the run over the past two years, Murray is a legitimate double-digit TD bet.

4. Broncos RB Royce Freeman – His rookie year derailed by Phillip Lindsay’s quicker emergence and a Week 7 high ankle sprain, Freeman maintains post-hype appeal after crushing Lindsay 3.22 to 2.35 in yards after contact per carry and finishing No. 4 among rookies in missed tackles forced (24) despite playing only 29% of Denver’s offensive snaps. While Lindsay missed the offseason program recovering from wrist surgery, Freeman hogged first-team reps under new OC Rich Scangarello, a Kyle Shanahan disciple whose zone-run game may prove a superior fit for Freeman than his straight-linish speedster teammate. Also a better pass catcher than his rookie numbers suggest – Freeman caught 79 balls and averaged over ten yards per reception in his Oregon career – Freeman is an exciting RB3/4 pick with RB2 upside on a Broncos team that will stay committed to the run under defensive-minded Vic Fangio.

5. Steelers TE Vance McDonald – While much of the fantasy community hones in on the winner of Pittsburgh’s No. 2 wide receiver battle, McDonald stands out as perhaps the biggest beneficiary of Antonio Brown’s departure. Only JuJu Smith-Schuster has a more-established rapport with Ben Roethlisberger, and Jesse James’ defection to Detroit further frees up playing time and opportunity. A beast with the ball in his hands, McDonald finished No. 3 among NFL tight ends in yards after catch behind only George Kittle and Travis Kelce last season, and only Kittle broke more tackles. McDonald played almost every snap with the first-team offense this preseason. He is a high-ceiling middle-round consolation prize for drafters that miss on bigger-named tight ends in the first few tiers.

6. Texans WR Keke Coutee – Houston’s inability to protect Deshaun Watson combined with Bill O’Brien’s light passing-game usage of running backs and tight ends plays perfectly to the quick-twitch game of Coutee, who ran 70% of his rookie-year routes in the slot. Including playoffs, Coutee averaged 10.0 targets and 7.2 catches over the five games in which he played 30-plus snaps. Even if that pace is unsustainable, Coutee is capable of destroying his ADP if he stays healthy. Although Coutee was plagued by recurring hamstring injuries in 2018, he played in 25-of-25 games to close out his Texas Tech career. Coutee missed much of camp with a high ankle sprain and isn’t expected back for Week 1 but should return early in the season. The missed time obviously torpedoed Coutee’s ADP, rendering him a value pick in the double-digit rounds.

7. Panthers WR Curtis Samuel – In addition to being an exciting breakout candidate, Samuel is one of my favorite Dynasty buys entering his age-23 season coming off a 2018 campaign where Samuel emerged as an every-down receiver down the stretch and logged 80-plus total yards and/or a touchdown in 8-of-13 games. From this year’s draft, third-year WR Samuel is younger than Deebo Samuel, Jalen Hurd, Terry McLaurin, Diontae Johnson, Hakeem Butler, and Hunter Renfrow, among others. Thus, Samuel has a two-year NFL head start on a rookie class of which he theoretically should have been a part. Even as D.J. Moore is being drafted much earlier, no one should be surprised if Samuel makes a bigger 2019 leap.

8. Steelers WR Donte Moncrief – Moncrief sewed up Pittsburgh’s No. 2 wideout role over James Washington long ago, shining in practice and drawing praise from Ben Roethlisberger and WRs coach Daryl Drake for his quick comprehension of the offense. A talented underachiever to this point in his career, Moncrief is only entering his age-26 season and is the biggest of Pittsburgh’s receiving options at 6-foot-2, 221 with 4.4-flat wheels. In Big Ben’s first post-Todd Haley season essentially running the offense on his own, the Steelers led the NFL in pass attempts (689) and ranked fifth in plays per game (66.1). Now, they must replace the league’s third-most unaccounted-for Air Yards (2,485) from last year’s team.

9. Packers WR Marquez Valdes-Scantling – At 6-foot-4, 206 with 4.37 speed, Valdes-Scantling wasted no time flashing his ceiling with 157 yards and a touchdown last preseason, then led all rookie receivers in yards gained on 20-plus-yard targets (311). Also demonstrating impressive versatility, Valdes-Scantling ran 46% of his routes in the slot. Although MVS shuttled in and out of Aaron Rodgers’ doghouse for allegedly running coach Mike McCarthy’s in-structure routes over Rodgers’ preferred improvisation, Rodgers seemingly warmed up to Valdes-Scantling during an impressive spring, and MVS ran ahead of lesser-talent Geronimo Allison during minicamp and OTAs. Even as Davante Adams is by-far Green Bay’s premier fantasy wideout to own, MVS offers the highest ceiling among Rodgers’ ancillary options.

10. Vikings RB Alexander Mattison – The Vikings pulled the third-round trigger on 221-pound Mattison to complement and provide insurance on smaller Dalvin Cook, who has missed 17-of-32 career NFL games. Since firing pass-happy OC John DeFilippo 13 games into last season, coach Mike Zimmer has gone all in on run-game establishment highlighted by the additions of new offensive boss Gary Kubiak and first-round C Garrett Bradbury. Although Mattison lacks flash – his forty time is 4.67 and he averaged fewer than five yards per career carry at Boise State – Mattison’s one-cut style meshes with Kubiak’s zone-run scheme, and Zimmer’s defense should keep Minnesota in run-friendly game scripts. Mattison has a realistic chance to open the year as a 10-12 touches-per-game back with goal-line vulturing potential.

11. Ravens RB Justice Hill – Moving from last year’s plodding Gus Edwards-Kenneth Dixon-Ty Montgomery triumvirate to this year’s revamped backfield, the NFL’s run-heaviest team will feature Mark Ingram on early downs and, ideally, Hill as an explosive change of pace. Hill was so good as an Oklahoma State true freshman that he relegated Seahawks starter Chris Carson to the bench, and Hill crushed the Combine with this year’s No. 1 SPARQ score among drafted backs. Hill’s ceiling is Alvin Kamara with an Austin Ekeler floor. He’s one of this year’s top late-round running back picks in an exciting spot for opportunity.