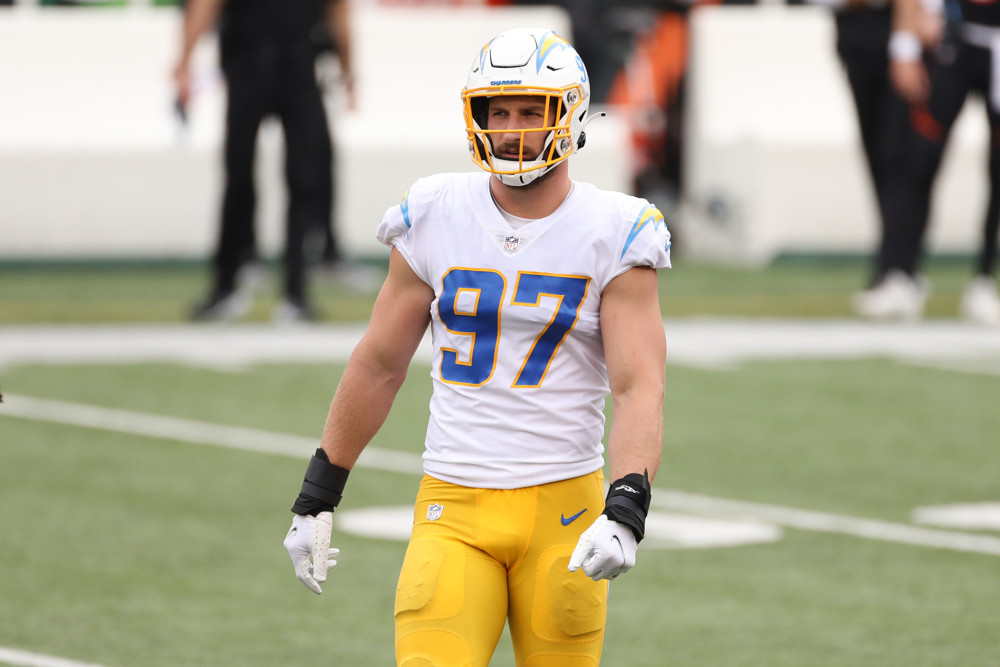 With that in mind, below you’ll find the biggest mismatches between defensive and offensive lines for Week 16. The objective is to project QB pressure through film study, injuries, scheme, coaching and talent.

New for this year, I’ve added my up-to-date defensive line pass-rush and offensive line rankings. You’ll find those at the top.

Chase Young gets to face-off against a backup left tackle in Trent Scott and Jon Allen gets to feast on left guard Chris Reed, which is the biggest individual mismatch of the game. Washington has a deep rotation of quality or better starters that will make life difficult for the Panthers pass-blockers, especially their left side.

Akiem Hicks has a distinct advantage this week against right guard A.J. Cann and especially backup center Tyler Shatley whenever kicked inside over him on passing downs. The Bears have an underrated interior group of rushers behind Hicks and along with Khalil Mack on the outside have a lethal top two combination with a solid group of secondary rushers around them to generate pressure against a slightly below average unit.

Notes: The Chargers DL ranks 13th in QB hurry percentage, 22nd in sacks per pass attempt, and 21st in pass rush win rate. DE Joey Bosa ranks 2nd in pressures with 41 and has been limited in practice. The Broncos OL ranks 24th in pass block win rate and 15th in sacks given up per pass attempt.

Joey Bosa gets to face-off against the oldest starting tackle in the NFL in Demar Dotson and while both players are banged up, Bosa has the clear upper-hand and will be able to win isolated matchups handily. Jerry Tillery will have a good shot at giving problems to rookie center Lloyd Cushenberry and Linval Joseph will command plenty of attention himself. There are enough threats on this line to give QB Drew Lock and this offense plenty of problems.

The Giants continue to struggle mightily at offensive tackle and the Ravens have a pair of edge-rushers in Yannick Ngakoue and Matt Judon to take advantage of it along with Calais Campbell likely being available to face the Giants rotation at left guard and center Nick Gates, all of which are significant mismatches favoring Campbell.

Notes: The Rams DL ranks 7th in pass rush win rate and 3rd in sacks per pass attempt. Aaron Donald ranks 2nd among DTs in pressures with 38 and is 2nd in the NFL in sacks with 12.5. Leonard Floyd is 28th in pressures with 25. The Seahawks OL ranks 7th in pass block win rate, 27th in pressure percentage given up, 28th in hurries given up, and 25th in sacks given up per pass attempt. RT Brandon Shell and LG Mike Iupati missed practice on Wednesday.

Aaron Donald only had two quarterback hits in the Rams Week 10 matchup with the Seahawks but has been red hot as of late and gets to face a rookie in Damien Lewis who is a better run than pass-blocker plus a banged up Mike Iupati or a backup in Jordan Simmons. Leonard Floyd will also get to potentially face a backup with starting right tackle missing practice, so the Rams top two pass-rushers will have advantageous matchups with Michael Brockers as a high end third option.