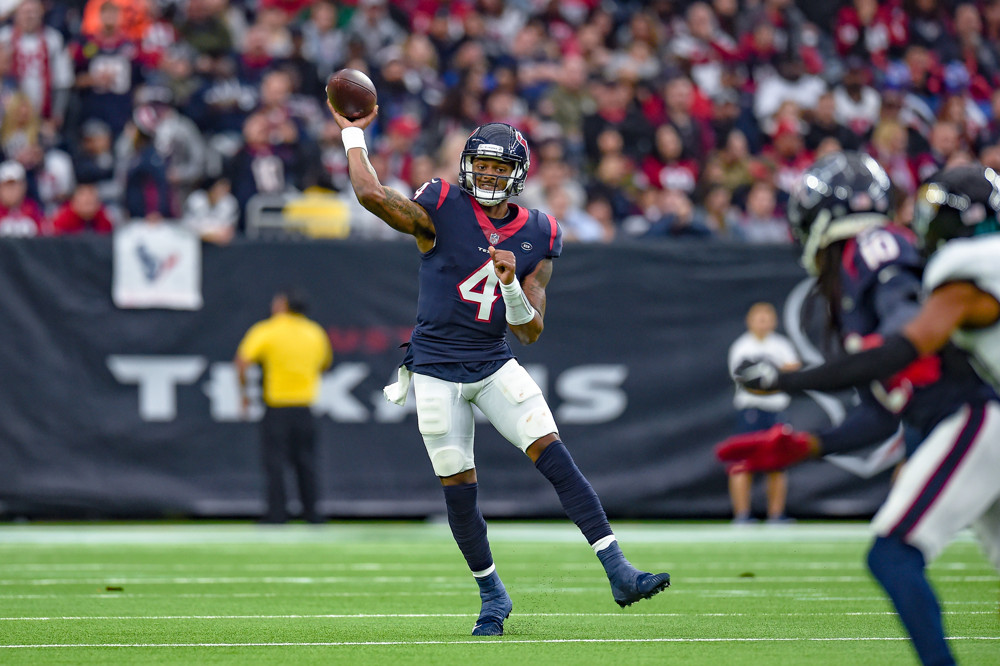 Overview: As quarterbacks are severely devalued in start-one-QB leagues, signal callers must be true point-scoring difference makers to be worthy of single-digit re-draft picks. Mahomes checked that box by throwing the second-most touchdown passes of all time (50) in his first season as an NFL starter. Although he remains capable of outscoring the quarterback field — especially after Tyreek Hill avoided suspension — regression is going to hit Mahomes’ league-high 8.6% TD Rate in the mouth. Watson can speak from experience. He dipped from 2017’s per-game QB1 scorer to last year’s QB4 as his TD Rate nearly halved from 9.3% as a rookie to 5.1%. As Mahomes tends to go multiple rounds ahead of Watson this year, I would rather wait for Watson than draft Mahomes at ADP. They are neck and neck in my projections, but Watson’s superior rushing ability gives him the slight edge.

Overview: Tier-two signal callers are every-week starters worth draft consideration late in the single-digit rounds.Even in a down year where Green Bay’s ancillary weapons failed to step up and Rodgers played through a tibial fracture and sprained MCL sustained in Week 1, he finished as the fantasy QB7. Rodgers’ 4.2% TD Rate was his lowest since he replaced Brett Favre as the Packers’ starter and is destined for positive regression. Cleveland’s Odell Beckham-infused offense is loaded, and Mayfield was last year’s QB7 in points per game in post-Hue Jackson Weeks 9-17. Wilson is the shakiest member of this tier due to Seattle’s unwillingness to let it rip. Wilson’s 8.2% TD Rate is bound for regression, and his 427 pass attempts in OC Brian Schottenheimer’s first year were Wilson’s fewest since 2013. Yet Wilson has been an outlier for his entire life, has never missed a game, and should experience positive regression on the ground after failing to score a single rushing TD for the first time in his career last season.

Overview: Third-tier passers offer every-week QB1 upside but have at least one limitation. Wentz’s completion rate and yards per attempt improved from his MVP-caliber sophomore year, but his back problems have become a concern. If healthy, Wentz has the requisite supporting cast and skill set to score with any of the quarterbacks in tier two. Ryan adds nothing with his legs and will likely find himself in fewer shootouts with several critical Falcons defenders back healthy. Murray’s dual-threat skill set isn’t entirely out of Michael Vick range, and Kliff Kingsbury’s progressive, up-tempo, pass-oriented attack gives this year’s No. 1 overall draft pick high-end QB1 upside, even as a rookie.

Overview: This big tier of QB1-capable scorers is the greatest testament to the depth of the position and why start-one-QB leaguers are encouraged to wait on quarterbacks in drafts. Newton was a preseason faller when he suffered a mid-foot sprain on August 23rd. Newton’s Week 1 availability isn’t necessarily in danger, but any mobility loss would be horrific news for his fantasy outlook. Based on sportsbook odds, Winston is my pick to lead the NFL in pass attempts and passing yards under Bruce Arians with a poor running game and league-worst defense to create shootout scenarios. Antonio Brown’s departure won’t go unfelt, but Pittsburgh has ample weaponry to keep Big Ben’s projection strong. Finally healthy late last season, Allen was fantasy’s overall QB1 in Weeks 12-17. The Bills significantly upgraded Allen’s offensive line and pass-catcher corps. Prescott and Jackson’s floors are raised by their rushing contributions, while Brees, Goff, Rivers, and Cousins are stable veterans whose ceilings are limited as one-dimensional scoring threats. Now 40 years old, Brees has finished QB9 or worse in points per game in back-to-back seasons. The Saints’ defense overtook the offense as the strength of the team down last year’s stretch. Brady jumped a full tier when Josh Gordon was reinstated; TB12 averaged 1.8 more yards per pass attempt and 3.5 more fantasy points per game with Gordon in the lineup last season.

Overview: This tier is a blend of potential breakouts and question-mark veterans. Through eight starts under Kyle Shanahan, Garoppolo has completed 65% of his passes at 8.5 yards per attempt with a 6-2 record. His only two losses were to the Vikings and Chiefs on the road. A consensus top-12 QB1 pick at this time last year, Jimmy G’s 2019 ADP has fallen deep into the twenties coming off a torn ACL. Trubisky was last year’s overall QB5 in Weeks 1-10, suffered a throwing shoulder injury in Week 11, missed two games, then sputtered as fantasy’s QB23 in Weeks 14-17. Darnold’s rookie season was up and down, but he finished strong with the NFL’s highest QBR in the final month. The Jets’ dysfunction notwithstanding, Robby Anderson, Jamison Crowder, Chris Herndon, Quincy Enunwa, and Le’Veon Bell make for a quietly-exciting pass-catcher corps. The Lions figuratively and perhaps literally tanked last season, hanging Stafford out to dry. Stafford’s 3.8% TD Rate was also his lowest in four years and should experience positive regression.

Overview: Deeper-league QB3s, almost all of whom have job-security concerns. The Titans’ acquisition of Tannehill shortens Mariota’s leash, while the Broncos could easily turn to Lock late in the season if Flacco falters, which he’s been doing for years. Andrew Luck‘s shocking retirement positions Brissett as Indianapolis’ short-term starter, but don’t be surprised if we see Kelly by midseason. It’s only a matter of time before No. 6 overall pick Jones usurps long-washed Eli. Redskins beat writers think Haskins will replace Keenum by no later than the first month of the season, and it would not surprise if Haskins starts Week 1. Fitzpatrick has some YOLO appeal on a Miami team that will spend the entire year playing from behind, but Rosen will play, too.