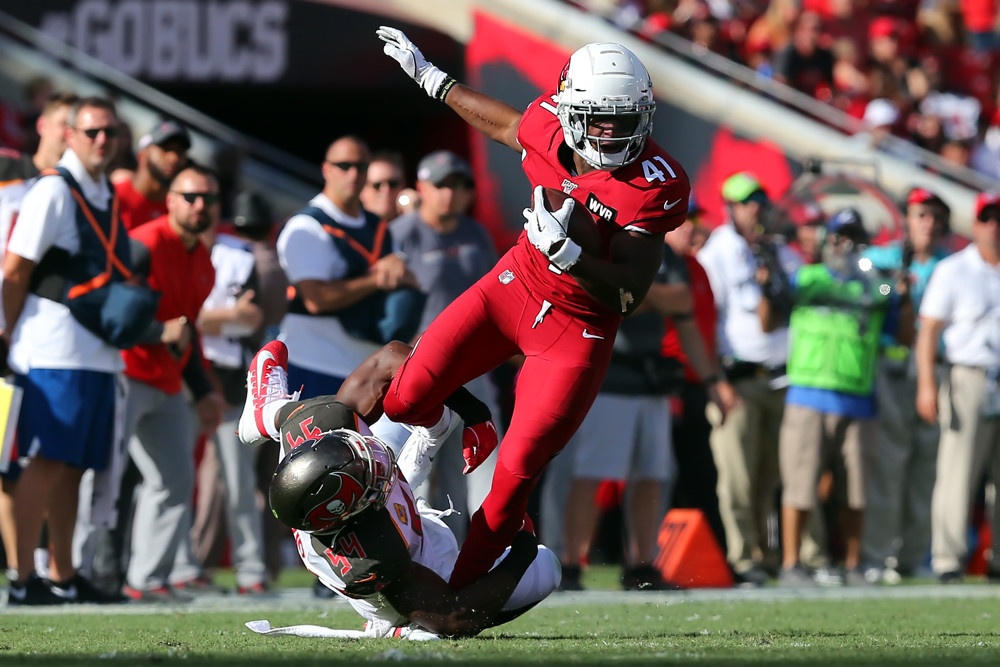 Editors Note: ETR is hosting a week 14 DFS contest at DraftKings. In addition to cash prizes, first prize receives a lineup review from Adam Levitan and 2nd-5th win a limited edition ETR T-shirt. There’s no rake, it’s only $3 to play and 890 spots pay out cash. This will fill before Sunday, sign up here! To see last week’s winners review video, click here.

Drake remained the focal point of the Cardinals’ backfield in Week 13 despite coming off of a bye that allowed David Johnson further rest and the return of Chase Edmonds. Edmonds didn’t see a snap, and Johnson played a meager 24% and only accounted for 19% of the rushing attempts and 6% of targets. Drake usurped 62% of the attempts and 18% of the targets after running a route on 60% of dropbacks versus only 24% for Johnson.

It is worth noting Drake had a drop in the game, only securing two of six targets and averaged a lowly 2.38 yards per carry. The door is open for Johnson and Edmonds to see more involvement, and the Steelers represent the fourth toughest PPR matchup for running backs (running backs are averaging 3.9 points less per game against the Steelers than the rest of their opponents).

After an explosive Week 12 performance, the Seahawks’ coaching staff found a way to keep Penny involved in Week 13. For the second consecutive game the sophomore back split snaps with Chris Carson (49% and 47%). In Week 13, it was Penny leading the way in the passing game with a 53% route per dropback rate along with 16% of targets. Penny also chipped in on the ground with 36% of rushing attempts. The backfield duties were flipped from Week 12 when Penny led the way in attempts (55%) and was less involved in the passing game than Carson (36% routes per dropback and 6% of targets).

While Penny’s late-season surge diminishes Carson’s weekly floor and upside, both backs can be viable plays given the Seahawks’ propensity to lean on the ground attack more than most teams. Seattle is dropping back to past the sixth least (56.4%) on the season and attempting the sixth most plays per game (66.6), creating one of the few nurturing atmospheres for a dual-headed rushing attack.

Coleman has averaged under two yards per carry in three of eight games played this season and surpassed 3.6 yards per carry in only two games. For the season he is averaging 3.8 yards per carry versus 5.9 for Raheem Mostert and 5.0 for Matt Breida. In Week 13, this disparity in performance seemed to finally tip the utilization scales away from Coleman (18% snaps, 17% attempts, 12% routes per dropback, and 5% targets) to his backfield mate Mostert (73% snaps, 66% attempts, 42% routes per dropback, and 10% targets). With Matt Breida likely to return to action in Week 14, it is tough to trust Coleman in fantasy lineups.

Just when I finally go and say something good about Jones in this column last week, he gets benched for pass protection problems versus the Jaguars. Jones saw his lowest attempt share (19%) since Week 2 and received zero targets. Peyton Barber stepped in to shoulder the rushing load with 55% of the carries, including two scores. What will happen moving forward is anyone’s guess. There is a possibility that the benching was used to get Bruce Arians’ message across, and Jones will return to the starting role, assuming he doesn’t miss another blitz pickup.

Guice erupted for 129 yards and two touchdowns against the Panthers despite limited utilization (30% snaps, 33% rush attempts, 22% routes per dropback, and 8% of targets). Adrian Peterson again led the team in rushing attempts (43%), and Chris Thompson led the team in passing work (41% routes per dropback). While Guice’s explosive game may have opened the eyes of the Redskins coaching staff, Peterson didn’t perform poorly, and Thompson is a premier pass receiving back when healthy, meaning this likely remains a three-way running back by committee on a team that runs the least amount of plays per game (54.2) in the NFL. Guice has juice but needs more playing time to remain consistent.

With Dalvin Cook nursing a bad shoulder after exiting the game in the third quarter of Week 13, Mattison could be in a position to take on more work moving ahead. Mattison accounted for 48% of the snaps, 29% of rushing attempts, 53% routes per dropback (season-high), and 11% of targets versus Seattle.

With Damien Williams out and Darrel Williams injured during the Week 13 game, Thompson managed a season-high 35% of snaps and 38% of rushing attempts. Thompson saw more work than LeSean McCoy in the rushing department (17% of attempts) with the game well in hand (31 point victory over Oakland). Darrel Williams appears very iffy for Week 14, and the team has signed Spencer Ware. Putting Thompson in a fantasy lineup for this week’s slate will be risky business given Reid’s recent preference for the committee approach, but no runner has taken a clear lead in the backfield so far, and Thompson isn’t short on talent. The preseason darling could find himself in a great position heading down the stretch.

Another preseason darling, Washington, hasn’t quite lived up to the hype in 2019. However, an injury to JuJu Smith-Schuster (knee – didn’t practice Wednesday) has opened the door to more playing time (91% routes per dropback and 100% routes per dropback). Washington has responded with 19 and 21 PPR points on 26% and 19% of targets in his last two outings. Not only is the second-year receiver seeing the field more, but the team is also playing to his strengths attacking down the field (18.1 and 24.5 aDOT). If Smith-Schuster remains sidelined, Washington could also continue to see slot opportunities (61% of routes in Week 13).

With Eric Ebron on injured reserve, Doyle found himself with increased playing time and opportunity in Week 13. He played 94% of snaps, ran a route on 91% of dropbacks, and garnered a whopping 30% of targets versus the Titans. Devin Funchess is not going to return, and T.Y. Hilton is still battling a quad injury leaving Doyle as a primary option for the Colts’ passing attack, which is depending on unproven options in Zach Pascal and Marcus Johnson. Doyle is likely a top-two option for the team moving forward even when Hilton returns, putting him in the weekly TE1 conversation for the remainder of the season.