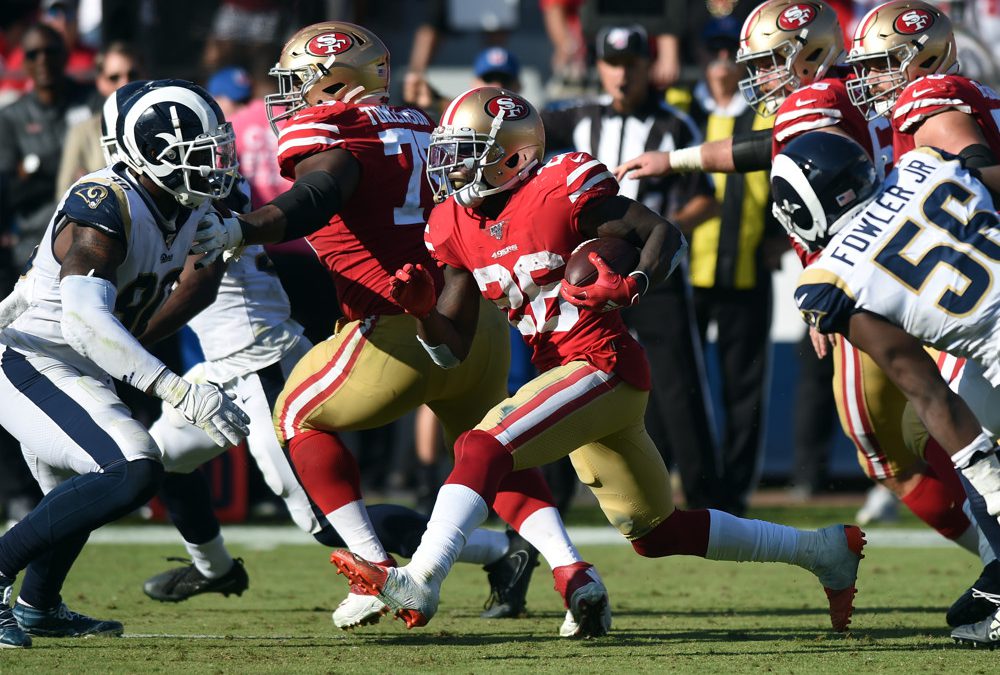 With new offensive installments and lack of playing time for starters in the preseason, the first few weeks of the regular season served as tune-ups for many teams. Over the past several weeks, new trends and questions have emerged as coaches gain a better feel for their offensive personnel, and players improve their grasp of the scheme and finer nuances of the game.

Head coach Anthony Lynn held to his statements about Gordon’s role as the lead back. Gordons’ snaps jumped from 45% to 60%. He led the team in rushing attempts for the second consecutive game and surpassed Austin Ekeler in routes per dropback (59%). Expecting production like 2018 isn’t realistic behind the Chargers’ make-shift offensive line, but Gordon will likely settle into a 15-20 touch role in situations where the Chargers don’t immediately fall behind.

Coleman made the monitoring section of this column last week after his return to the lineup. Week 6 provided another encouraging data point with him leading the team in snaps (56%), rushing attempts (44%), routes per dropback (46%), and attempts from inside the five with four tries (100%). Raheem Mostert’s opportunities coincidingly dropped (9% snaps, 10% attempts, 3% routes per dropback), and Matt Breida held steady as the number two back (35% snaps, 32% attempts, 34% routes per dropback).

Zooming out, the bigger story here is Howard’s consistent climb in attempt share over the past four weeks (37%, 45%, 45%, 59%) and his domination of touches inside the five (100% all four weeks). The Week 6 game script limited Howard’s box score as the Eagles fell behind early, but his utilization still grew despite thoughts that Sanders might be the better fit in that type of game script. Howard could have another big week coming versus a Cowboy’s defense that struggles to stop the inside run.

This column urged readers to consider a continued downturn in opportunities for Ekeler in Week 6, with Melvin Gordon working his way back into playing shape. That role reduction came to fruition versus the Steelers on Sunday Night Football despite a trailing game script that could have favored the agile pass catcher. Ekeler’s snaps and route per dropback rates hit season lows (45% and 43%). He still saw 36% of the Chargers’ rushing attempts, but his target rate also hit a season-low of 9%.

Gordon didn’t do much with his increase in opportunities (bested Ekeler in attempts and routes), so we can’t rule out a slight rebound for Ekeler eventually. For now, he is the change of pace back (10 to 12 touches per week) in an erratic offense with offensive line problems.

Two weeks into the return of Damien Williams, there isn’t a clear utilization pattern emerging for this backfield. After leading the team in snaps and rushing attempts in Week 5, Damien Williams fell behind LeSean McCoy, who led the backs in snaps (49%), rushing attempts (73%), and targets (6%). Darrell Williams’ role is almost nonexistent. He has zero carries in the past two weeks but is seeing the field a little in passing situations (16% and 14% routes per dropback). This is a muddy committee situation to avoid.

Last week Freeman landed in the negative trends section of this column with a caveat that trailing game scripts corresponded with his declining utilization. In Week 6, the Falcons lost by one point to the Cardinals; their closest loss since Week 4 when they fell by three to the Colts. In these two close games, Freeman posted season highs in rushing attempts with 16 and 19 attempts.

This past weekend the Falcons used 12 and 21 personnel more often with tight end Luke Stocker and fullback Keith Smith seeing season-high snap rates (54% and 27%). The Falcons were within one score for a little over half of their time of possession in this contest despite falling behind 27 to 10 early in the third quarter. The Falcons tied a season-low for pass dropback rate at 63% (tied with Week 4).

At this point, Freeman is a game-script-dependent fantasy asset. In games where the Falcons have been able to stay competitive and pass less, he has RB1 upside. Outside of those games, his RB2 production is manifesting despite mediocre utilization margins more indicative of an RB3. Freeman’s path to legitimate fantasy stabilization is more opportunities from inside the five-yard line.

Mattison might be the number one handcuff in fantasy. He is the clear number two in one of the top running schemes in the league behind Dalvin Cook. Mattison has rewarded the Vikings with his play. According to Pro Football Focus, he is sixth in runs of 15 yards or more (six) despite only 48 attempts on the season. Dalvin Cook has ten on 108 attempts. With the Vikings building a solid early lead versus the Eagles in Week 6, Mattison saw a season-high in attempt share at 40% and got his first attempt from inside the five on the season.

The return of Sam Darnold revitalized the entire Jets’ passing attack. Specifically, it awoke Crowder’s season. In two games with Darnold, Crowder has seen target shares of 37% and 28%. The lethargic pace of the team continued (54 plays at 1.9 snaps per minute), which dampens some of the upside of this offense, but Crowder and Anderson led the team in routes per dropback (91% and 100%) as the primary options in the passing game. Anderson’s 25% target share set a new personal watermark for the season.

Tate and Slayton were on the field for 100% of Daniel Jones’ dropbacks in Week 6 versus the Patriots. Tate operated from the slot 88% of his routes (per Pro Football Focus), led the team with 32% of targets, and Slayton finished second at 23%. Depending on the health of Evan Engram, Saquon Barkley, and Sterling Shepard for Week 7, Slayton could return to fourth or fifth in the pecking order. With Shepard likely out for at least another week after suffering his second concussion of the season in Week 5, Tate’s role is firm as a Top 3 option for the team in for the immediate future.

Williams has landed in this section multiple times, and this appearance serves as a reminder that his big day is coming. His routes per dropback would have approached 100% again this week if not for leaving the field for a few plays due to injury. Opponents are focusing their attention on Keenan Allen, and Williams has led the team in targets two consecutive weeks with 23% of targets each game. He has led the team in share of Air Yards each week with 66% and 39%. The return of Hunter Henry will likely block huge target days, but some big-play touchdowns are within reach.

Callaway’s snaps (43% and 69%) and routes per dropback (37% and 88%) have increased each week since returning from his suspension. Week 6 marked the return of Rashard Higgins, but he didn’t see the field. Callaway has led the receivers in aDOT each of his two weeks (16.7 and 13.5) with 13% and 11% of the targets. He has big play ability and with slightly more involvement, could become a viable punt option in larger GPP contests.

Diggs finally paid off for fantasy owners in Week 6 with 44 points in PPR formats. Against a terrible Eagles secondary with a stout run front, the Vikings chose wisely in their plan of attack, and it was a boon for Diggs. Unfortunately, his 37% target share isn’t likely sustainable given his still limited underlying utilization metrics. His routes per dropback continue to drop (83%, 81%, 77%) and his snaps are also problematic (85%, 75%, 63%). On a team dropping back to pass second least in the league (49%) and ninth-worst in plays per game (59), those utilization rates won’t consistently bare fruit.

Pettis, now finally healthy, has seen his snap counts (63%, 71%) and routes per dropback (68%, 74%) on the rise since the bye week. Pettis finished second on the team to George Kittle with 18% of the targets in Week 6 and could see even more work with Deebo Samuel dealing with a groin strain. Pettis has always flashed solid separation and route running traits and could finally break free from his terrible off-season slump with consistent opportunity.

The Rams’ receiving corps was listed in this same section last week due to the emergence of a new option in the passing game – Gerald Everett. Week 6 provided some mixed data points for the group, but Cooper Kupp emerged with 25% of the targets to lead the team again which led me to remove him from this group. Woods and Cooks both played almost every snap, and each was on the field for 100% of routes per dropback, but again fell behind Everett in targets. The playing time isn’t an issue, but it doesn’t look like Everett’s involvement is going away – the weekly floor for each of these players is likely lower than when the season began.

Henry wasted no time in his return from injury playing 66% of snaps, running a route on 78% of Philip Rivers’ dropbacks, and finishing second on the team with 20% of targets. Henry also led the team in endzone targets with two (50%). Henry likely sees a boost in snaps and routes in Week 7 with another week of conditioning.

Witten’s trends over the past three weeks are up. His snaps (79%, 83%, 88%) and routes per dropback (69%, 82%, 79%) are in solid standing. Week 6 provided his season-high for target share with 18%, and bigger days could be coming with Amari Cooper’s status in doubt due to a thigh contusion that knocked him out of the game versus the Jets. Witten also saw one endzone target (50%) last week.

Seals-Jones’ routes per dropback dramatically spiked at 75% in Week 6. In the previous two contests he saw rates of 47% and 30%. He finished second on the team with 16% of targets and might be in line for similar workloads moving forward. Counterpart Demetrius Harris has coincidingly seen his utilization metrics plummet outside of his involvement in the endzone, where he has two targets in the past two weeks versus zero for Seals-Jones.