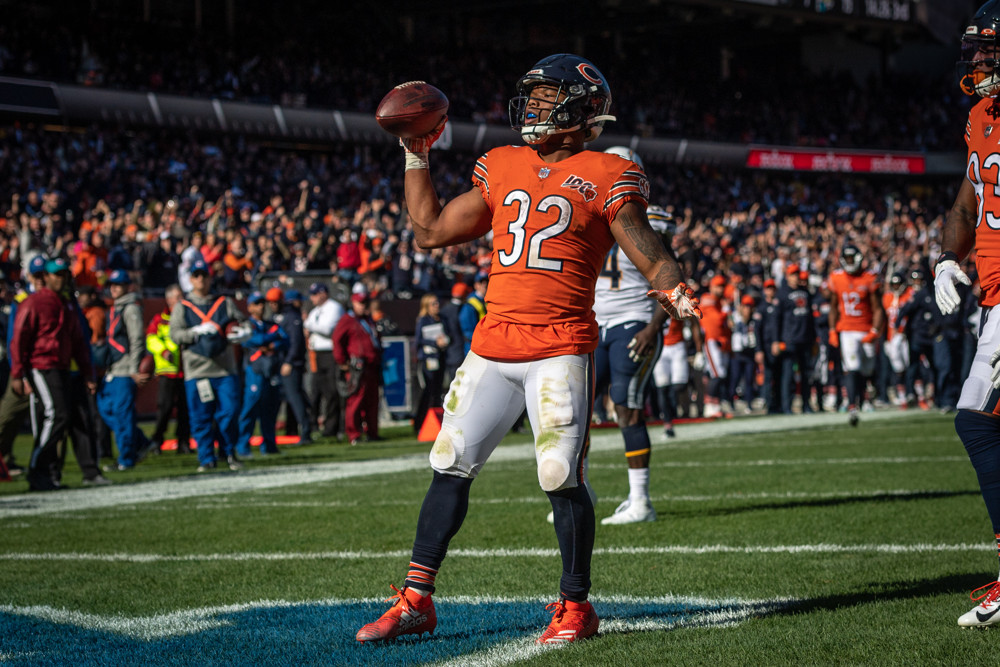 A week after Matt Nagy stated, “I know we need to run the ball more. I’m not an idiot,” the Bears rushed the ball a season-high 38 times for 162 yards in Week 8 versus the Chargers. David Montgomery handled 71% (27) of those, including three attempts inside the five. Montgomery owns all 10 of the Bears’ rushing attempt inside the five on the season, which places him third in the NFL behind Dalvin Cook and Sony Michel. Montgomery also saw his second-highest target share of the season (14%).

Tarik Cohen saw his lowest snap (20%), rush attempt (11%), and target rates (9%) of the season after getting dinged in the first quarter. He likely bounces back from those lows, but in close or leading game scripts, Montgomery is locked into the lead rushing role with 60% of the attempts for the season.

The rookie runner has seen his snaps (33%, 35%, 47%), rushing attempts (27%, 31%, 42%), and routes per dropback (29%, 29%, 35%) increase over the past three weeks. A combination of leading game scripts (27 point victory and 14 point victory) and Malcolm Brown’s injury are likely driving factors in this trend, making it a questionable one to trust. However, there is a chance he retains the role even when Brown returns, and with Todd Gurley’s injury concerns, he is a viable stash option in most season-long formats.

In the first game without Kerryon Johnson, the Lions’ backfield was a three-way committee. Ty Johnson led in snaps (39%), routes per dropback (42%), and targets (13%). Tra Carson led in rushing attempts (50%). J.D. McKissic worked in on passing downs, running a route on 39% of dropbacks, and garnering 9% of targets. With Matt Patricia’s historical ties to three-way backfields and the lack of a do-it-all back, this could quickly turn into a negative trend next week.

The Panthers drew a tough matchup in Week 8 versus the 49ers, and Samuel came up small in the PPR box score with nine points despite a 30% target share. Beyond the big Week 8 target share, Samuel’s underlying metrics continue to look solid for the season. He is second in target share (21%), leads the team in Air Yards (39%), and end zone target share (67%). While Carolina remains a balanced passing attack, Samuel’s opportunities are high-leverage.

A few weeks back, Metcalf landed on the negative trend section of this column as the return of David Moore sapped his snaps and routes per dropback. Now he lands in the positive trend section because he has reversed that trend by accumulating 76%, 82%, and 96% routes per dropback over the past three weeks. He also has five end zone targets in that time frame and leads the team with 12 (36%) on the season. Metcalf is squarely in the WR3 with upside conversation.

The eventual return of A.J. Green will eat into Tate’s targets, but for now, he is the de facto No. 1 option inside the five-yard line. Tate has a league-leading seven targets inside the five over the past three contests, including four in Week 8. The young wideout has also led the team in targets two of the past three games (26% and 25%). If Green is held out again after the Week 9 bye, Tate remains a low-end option.

Stills was in a route on 100% of Deshaun Watson’s dropbacks in Week 8 and will be a viable flex option each week Will Fuller misses. Stills only saw 13% of targets but has upside to get to 20% and has big-play ability.

Pascal played well in Week 7 on limited snaps, and the Colts’ coaching staff rewarded him with an increased role in Week 8. The young wide receiver played 92% of the snaps and ran a route on 91% of team dropbacks. Parris Campbell is still returning to health, but Pascal is trending positively over the past two games.

With the injury to Josh Gordon, Dorsett has logged two consecutive 100% route per dropback performances. Mohammed Sanu worked in at the expense of Jakobi Meyers and Gunner Olszewski. Dorsett carries the largest aDOT on the Patriots (13.2), providing something the rest of the roster lacks – speed. When the Patriots find themselves in more competitive games, Dorsett will have an opportunity to provide fantasy value.

With Mohammed Sanu moving on to New England, there were hopes that Ridley might see a spike in snaps and routes per dropback to help spark his low target share (15%), but that didn’t happen. Ridley only played 80% of the snaps and ran a route on 81% of the team dropbacks in Week 8. Russel Gage (65%) and Christian Blake (19%) saw spikes in routes per dropback to offset the absence of Sanu.

In his first week with the team, Sanders ran a route on 100% of the dropbacks. He is the only receiver to do that for the team this season. Sanders was the second most targeted option on the team at 23%, only behind George Kittle (32%). Marquise Goodwin missed Week 8 (personal), but no other receiver was close to Sanders’ route utilization. Deebo Samuel was the closest at 65%. Dante Pettis, who was trending up, only saw 38%. The 49ers have been rotating receivers all season looking for an answer, but no one has stepped up. Don’t be surprised if Sanders is in the positive trend section of this column next week as the number two option in this passing attack.

Fant’s snaps (65%, 72%, 82%) and targets (11%, 15%, 19%) have risen each of the past three weeks. He also saw his first end-zone target of the season in Week 8. In the team’s first game without Emmanuel Sanders, he was more of a factor than DaeSean Hamilton, who didn’t see an increase in snaps or routes. Joe Flacco’s injury could derail Fant’s positive momentum, but for now, his trends are up.

The enigmatic tight end landed on the monitoring section of this column last week after seeing a snap spike (75%) in Week 6 before the Browns’ bye week. In Week 8, his role crashed back to earth running routes on only 51% of dropbacks.

Eifert’s snaps (71%), routes per dropback (78%), and targets (17%) burgeoned to season highs in Week 8 versus the Rams. Previously, his routes per dropback were hovering around the 50% mark most weeks. Whether this will turn into a trend or if it was a one-week matchup situation is unknown at this point. Typically, the Bengals have three wide receivers in the 80-100% snap range each week. However, this past week, Alex Erickson only reached 61% as head coach Zac Taylor opted for more 12 personnel looks with Eifert and C.J. Uzomah.