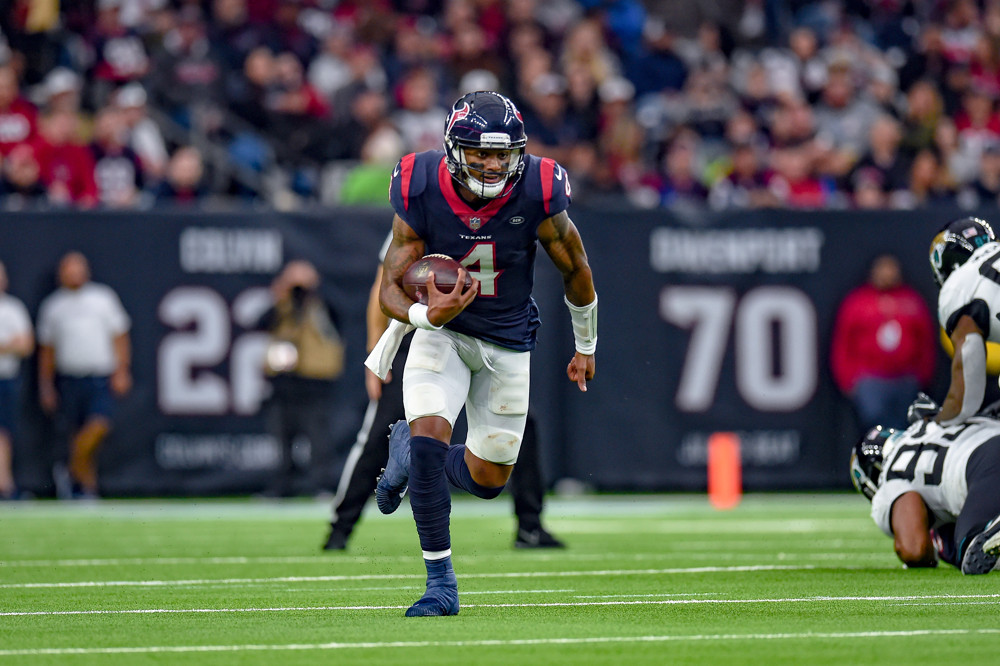 Deshaun Watson is due for a market-setting contract entering his fourth NFL season after the Texans activated Watson’s fifth-year option for 2021. (2020’s fifth-year QB option cost $22.8 million.) Watson will play his first season sans DeAndre Hopkins, who accounted for nearly one third of Watson’s 2017-2019 completions. The 2020 Texans project to take a step back – their Win Total is just 7.5 after Bill O’Brien’s team went 10-6 in spite of a negative point differential (-7) and the good fortune of going 8-3 in one-score games, metrics likely to regress back to the mean. Negative scripts work in the fantasy favor of Watson, who plays with point-scoring urgency when his team is behind. Watson’s career yards per attempt spike from 7.7 when leading to 8.4 when trailing. His yards per carry leap from 4.4 to 6.3.

Will Fuller enters his contract year staring at the opportunity of a lifetime as Houston seeks to replace Hopkins’ 150 targets, and Fuller – by far – returns as the Texans’ pass catcher with the best built-in rapport with Watson. As Fuller’s receiving line even with Hopkins hogging volume is 82/1,237/7 over the last 16 games in which Fuller drew more than two targets, durability remains Fuller’s greatest hurdle in the way of an eruption year. Through four NFL seasons, Fuller has missed 22 games due to three hamstring strains, a broken collarbone, fractured ribs, 2018’s ACL tear, and ongoing groin problems that required sports hernia surgery this past January. Nevertheless, I plan on making Fuller one of my most-drafted 2020 fantasy receivers based on his affordable cost and league-winning post-Hopkins upside.

Brandin Cooks was acquired from the Rams for a 2022 fourth-round pick, making the Texans his fourth team in as many seasons. With just 680 yards and four touchdowns over his last 16 games, the Rams tired of Cooks’ lack of productivity and likely feared for his future; he’s suffered at least five concussions in the NFL. Yet Cooks won’t be 27 when the season starts, still runs like the wind, and enters a wide-open Texans wideout depth chart in a Watson-quarterbacked offense. Cooks is an upside WR3/4 pick.

Randall Cobb joined the Texans on a three-year, $27 million deal after something of a bounce-back season in Dallas, where Cobb averaged his most yards per target (10.0) since 2014, a career-high 15.1 yards per catch, and finished an above-par 21st among 57 qualifiers in yards per route run from the slot (1.78). Even as Cobb appeared in 15 games with the Cowboys, he battled hip and back strains and has a very long history of ankle, shoulder, and hamstring injuries. Cobb doesn’t offer a particularly safe floor or high ceiling but has job security as the primary slot receiver in one of the NFL’s highest-urgency passing games and is worth late flyers in both season-long, re-draft and best-ball drafts.

Darren Fells, Kenny Stills, Jordan Akins, Keke Coutee, and Jordan Thomas make up the Texans’ complementary pass catchers. Fells re-upped with Houston on a two-year, $6.3 million deal after scoring a career-high seven TDs and playing 70% of the Texans’ offensive snaps. Fells is a classic touchdown-or-bust TE3. Stills was a volatile producer after O’Brien acquired him a week before Week 1. Lightly used pass-catching tight end Akins has cleared 50 yards twice in 32 NFL games. Coutee fell deep into O’Brien’s 2019 doghouse and was bumped down the depth chart when Cobb signed. Thomas is mostly a blocker.

David Johnson was acquired from Arizona in exchange for DeAndre Hopkins and what amounted to a second-round pick. Real-life football implications aside, Johnson’s move to Houston positions him for heavy volume after Carlos Hyde’s departure freed up 255 touches. Yet 245 of those were carries, and Johnson’s biggest football-playing weakness is interior running. Duke Johnson looms as a passing-game threat, while Watson all too often refuses to check down. Drawing the NFL’s fourth-softest run-defense schedule helps, but Johnson’s passing-game production is likely to disappoint, and his recurring back problems represent a major red flag. Johnson looked stiff as a board in the second half of last season, ultimately finishing dead last in PFF’s Elusive Rating. Johnson is a high-risk, volume-driven RB2/flex pick.

Duke Johnson was acquired from Cleveland for a third-round pick last August, yet remained typecast as a scatback by Bill O’Brien after years of Hue Jackson doing the same. Miami’s all-time leading rusher, Johnson leads all running backs in yards per touch since entering the league (6.5) yet received per-game touch averages of 7.9, 5.4, 9.8, and 7.9 over the last four years. Still, Johnson’s all-purpose talent and David Johnson’s injury risk give Duke enough upside for mid- to late-round, RB4/5-level investments.

DraftKings sportsbook set the Texans’ 2020 Win Total at 7.5 games. Last year’s team outkicked its advanced metrics by going 10-6 despite a negative point differential (-7) and went 8-3 in one-score games, a win rate bound for regression. Houston’s passing game took a big hit by ridding itself of difference-maker DeAndre Hopkins, while first-year DC Anthony Weaver’s defense is brimming with holes. The Texans drew the NFL’s 12th-toughest schedule, including a brutal Weeks 1-4 start at the Chiefs, versus the Ravens, at the Steelers, and versus the Vikings. I’m going under on 7.5 victories.