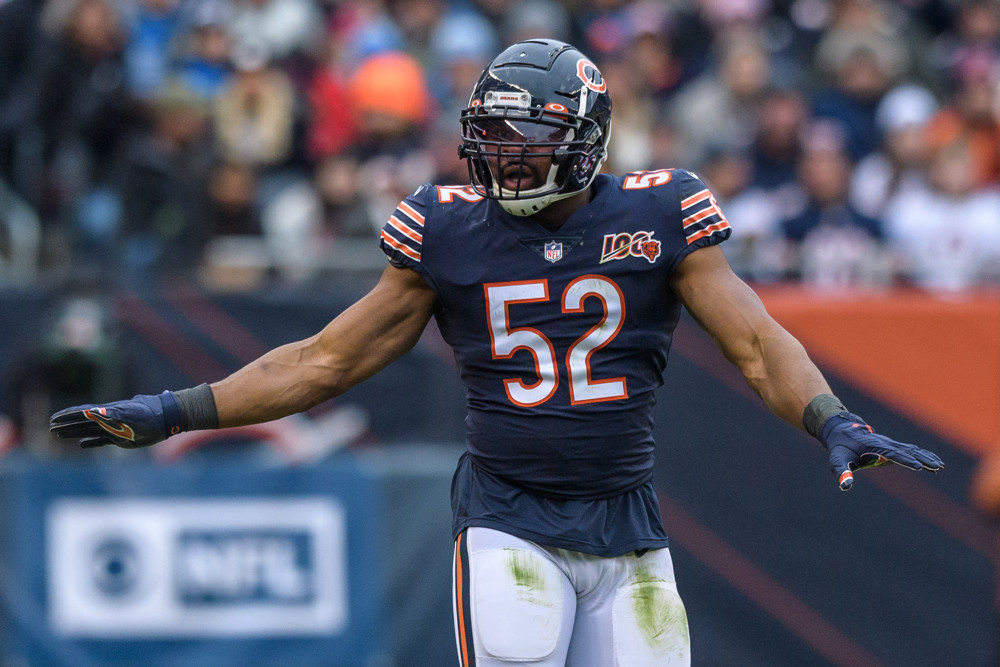 The Rams OL are coming off a game against the Steelers that they were absolutely dominated in, partly because they played seven total linemen with three different interior combinations due to injury. This is a reeling unit that will need to prove they can reach a competent level again before we can restore any confidence in them holding up, especially against defensive lines with an elite rusher or more.

Khalil Mack has had a relatively quiet season compared to last year but it doesn’t mean he still isn’t an elite-rusher with the capability to take over a game. Mack will have plenty of opportunities to do that in this one with a right tackle in Bobby Evans making his first career start at the position and LT Andrew Whitworth coming off his worst game in years. The interior is a disaster at this point so guys like Roy Robertson-Harris, Eddie Goldman, and Nick Williams should be able to have their way up front.

The Broncos are coming out of their bye week and will likely have some new wrinkles in the game-plan to combat what the Vikings do well both offensive and defensively, but they have to travel to Minnesota in a hostile environment against one of the league’s best defenses with Brandon Allen at QB. Making matters worse is that their offensive tackle pairing is severely outmatched against the league’s best pass-rushing duo, so there is only so much they can do to scheme up their protections when each side is at a disadvantage.

If Ja’Wuan James plays the prospects of their OL holding up in pass-protection bump up but only marginally since he will be fresh off a nagging knee injury that has kept him out the majority of the season while having to deal with the league-leader in pressures in Danielle Hunter. This is the exact sort of matchup that Garret Bolles could have another meltdown in having to block Everson Griffen and his repertoire of potent pass-rush moves.

Chris Jones has been a tear since returning from injury in Week 9, and absolutely dominated against the Chargers last season racking up 3 sacks and 7 QB hits in two games. The Chargers OL has a backup at center, right tackle, and likely left tackle if Russell Okung doesn’t play. Jones has owned LG Dan Feeney in prior matchups, with this having potential to be a disastrous game for the Chargers interior.

Frank Clark returned to action last week after missing the previous couple weeks and it’s since been revealed that he has had a pinched nerve in his neck since training camp, which helps explain the drop-off in play. Even with Clark at about 80-85% of what he is capable of the Chargers have the worst tackle duo in the NFL when Okung isn’t playing, so the potential is there for a big game from him as well.

The difference in the Chargers’ performance as an OL with and without Okung is striking and these last two weeks against the Packers (with Okung) and Raiders (without) are evidence of that. The Raiders are not a very good pass-rushing unit yet without Okung they were able to amass 16 QB hurries, 4 QB hits, and 7 sacks in week 10. If it is announced later this week that Okung can’t play, move the Chiefs defense up on your priority list.

The Patriots don’t take many sacks due to QB Tom Brady’s ability to avoid pressure in the pocket by reading the defense quickly, using subtle movements to find passing lanes, and throwing the ball away quickly if nothing is there (Brady ranks 2nd in the NFL in throwaways with 22).

When you study the Patriots’ OL on film there is a different story than some of the advanced metrics indicate starting with their two backup starters in center Ted Karras and LT Marshall Newhouse being problems, particularly as pass-blockers.

Both Karras and Newhouse struggle against top-tiered rushers that can string together multiple moves. Fletcher Cox has been dominant the last few weeks and will be able to continue that when matched up against Karras and to a lesser extent, RG Shaq Mason. Derek Barnett isn’t top-tier but is solid enough to give Newhouse some problems, while Brandon Graham can do the same to Marcus Cannon on the other side.

With the Eagles having a top 10 defense per DVOA and the capability to stymie the Patriots ground game, there should be enough opportunities for them to rush the passer on obvious passing downs. Even if that doesn’t result in many sacks, expect Brady and this passing game to have to live and die with the short passing game since any longer developing plays will only further expose their clear mismatches up front. Cementing this as a top mismatch for the week is the Eagles top 4 ranking in pressuring QBs without blitzing (sending four rushers), so Brady likely won’t have many ‘hot’ throws to rely on when protection breaks down.

This is the first time all season I’ve had two different DLs from the same game as mismatches but it is certainly warranted with how well the Rams DL has been playing lately combined with how shaky the Bears OL has been.

Chicago made a switch along their interior prior to last week’s game, moving LG Cody Whitehair over to center and James Daniels to LG in an attempt to put the more experienced Whitehair at the pivot spot to help protection and communication. Having the raw and inexperienced RG Rashaad Coward alongside Daniels (first year at the position) was an issue, so Whitehair’s experience in theory should be able to assist both now that he is in-between the two.

While the new-look OL held up pretty well against the Lions front last week, the Rams DL is an entirely different animal with Aaron Donald coming off a monster day in which he dominated an excellent player in Steelers RG David DeCastro. Coward is on the opposite end of the spectrum in terms of league-wide right guards, so this is as big of an individual mismatch as you’ll find this season.

Solidifying these two teams in my top mismatches is the fact that QB Mitch Trubisky is possibly the worst QB in the league and makes his OL look a lot worse by taking sacks and failing to avoid pressure.

Atlanta is coming off their best game of the season in a 26-9 win against the Saints and now take on another very talented defensive line in Carolina that is deeper on the interior than the Saints (where they Falcons are particularly weak as an OL), specifically at each guard spot. With Gerald McCoy, Dontari Poe, and Kyle Love, there is a solid rotation here that presents serious problems for the integrity of the middle of the pocket.

The Panthers ends are led by a rookie in Brian Burns who predominantly wins with speed and bend off the edge, making this a bad matchup for RT Kaleb McGary. McGary played a solid game last week taking on the power-rushers that the Saints have off the edge, but will have a tougher time against the likes of Burns and fellow speed-rusher Mario Addison this week.

The Falcons could have figured out what was ailing them over the first half of the season and go on a winning streak but I’m not ready to concede that their team or OL have fixed their issues with one good game. With another tough divisional road test this week we should learn how legit the Saints win was.