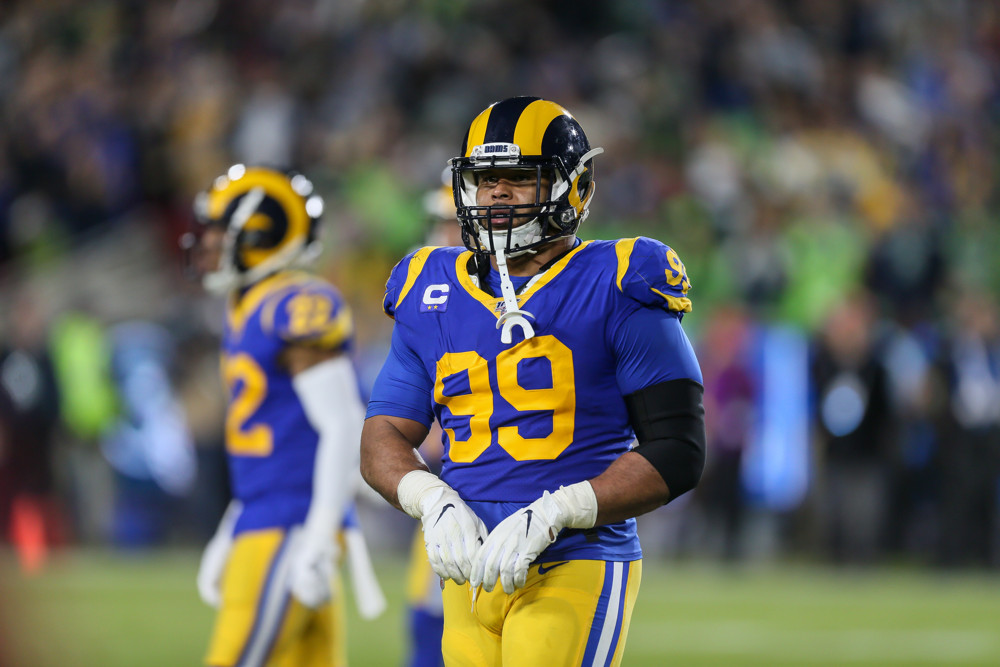 With that in mind, below you’ll find the biggest mismatches between defensive and offensive lines for Week 8. The objective is to project QB pressure through film study, injuries, scheme, coaching and talent.

New for this year, I’ve added my up-to-date defensive line pass-rush and offensive line rankings. You’ll find those at the top.

The Cowboys are getting their best offensive lineman and an elite starter back in Zack Martin plus could get Joe Looney back as well but are still severely outmanned at the other three positions in this matchup.

The Eagles have a slew of quality starters on their defensive line and can expose the Cowboys dreadful tackle situation this week led by Brandon Graham being a terrible matchup for right tackle Terrance Steele. After that expect the rotation of Derek Barnett & Josh Sweat to feast on left tackle Cameron Erving while the rotation of Malik Jackson & Javon Hargrave does the same inside on left guard Connor Williams.

Throw in the fact that Dallas will roll out QB Ben DiNucci in his first career start and it becomes a safe bet to expect the Eagles defensive line to control this game.

The Giants offensive line was a bad unit this season prior to Will Hernandez’s positive COVID-19 test result and now could be missing multiple starters against a top 10 pass-rushing defensive line. There are lopsided matchups across the line in the Bucs favor in this game and make this one of the week’s no-brainer picks for biggest mismatches in the trenches.

The Ravens are severely outmatched along their interior offensive line in this game with one average starter in Bradley Bozeman and a below average starter at best in Tyre Phillips having to face off against two elite starters in Cameron Heyward and Stephon Tuitt.

Baltimore’s stellar tackle duo will help QB Lamar Jackson have a chance to sit in the pocket when needed, but not enough to overcome the middle of the pocket getting caved in with pressure in Jackson’s face from both sides.

The Ravens will need to dial up a creative game-plan by their own already innovative standards to help circumvent their inability to pass-protect up the middle to give their offense a chance to function at even a relatively high level against this dominant Steelers front.

Aaron Donald is a bad matchup for everyone on the Dolphins offensive line, particularly on the interior when Donald aligns in his traditional three-technique alignment. Left guard Ereck Flowers and right guard Solomon Kindley are enjoyable players to watch on tape for their rugged style and nasty demeanors, but technically they don’t stand a chance vs. Donald.

Donald and Michael Brockers on the interior will take up plenty of attention away from the Rams edge-rushers which should result in big games for names such as Leonard Floyd and Terrell Lewis. A similar dynamic unfolded last week for the Rams against the Bears offensive line when Floyd was able to win a couple key reps with his cross-chop technique and he should be able to replicate that this week vs. rookie right tackle Robert Hunt. Opposite Floyd look out for rookie edge-rusher Terrell Lewis to make some noise vs. one of the worst starting left tackles in football in Jesse Davis as well.

The Titans defensive front has been off to a shaky start so far this season (tied for 30th in sacks with seven) but the tape still shows above average or better starters across the line including a very good player in Jeffrey Simmons anchoring the middle.

This is a good bet for a breakout game for Tennessee’s pass-rush considering the Bengals have a bottom three line when healthy and are poised to take the field without three starters, including by far their most capable in left tackle Jonah Williams.

Simmons will be able to consistently walk guards into QB Joe Burrow’s lap while Harold Landry and to a lesser extent Vic Beasley have advantageous matchups everywhere else. As we’ve seen Burrow can still effectively lead an offense in the midst of heavy pressure, but he will have to rely on even worse players up front this week against a more than capable Titans pass-rush itching to pin their ears back and improve their production on the stat-sheet. If Jadeveon Clowney somehow suits up and plays in this one slam the “over” in expected pressures, hurries, QB hits, and sacks with even more confidence.

This inclusion is based on Joey Bosa getting to tee off on Demar Dotson, a 35-year old stopgap right tackle at the tail end of his career. Bosa has been a top three pass-rusher on tape this season and should be able to feast in this game whenever isolated vs. Dotson and worst case draw significant attention away from the rest of the defensive line.

Assuming Bosa is doubled with slide protections heading his way more often than not, expect Melvin Ingram to be isolated on the left side with Jerry Tillery left one-on-one over either guard. Both of Denver’s guards are the strength of the line so there isn’t a glaring mismatch here in a vacuum, but considering how little help they will receive chances are Ingram or Tillery will be able to generate pressure.

Watch out for Bosa though, since teams with better right tackle situations than Denver’s have known heading into the week how great he is and still haven’t contained him.

The Jets have stud rookie left tackle Mekhi Becton back in the lineup which is a boost, but the unit overall will maintain their status as a bottom two line in the league due to being below average or worst at every other position.

The Chiefs have the best interior pass-rusher in the NFL not named Aaron Donald in Chris Jones and a good outside rusher in Frank Clark with a very good get-off and flashes. Jones will be a matchup nightmare for the entire Jets interior while Clark should get to spend most of the day over raw, technically sloppy right tackle George Fant. 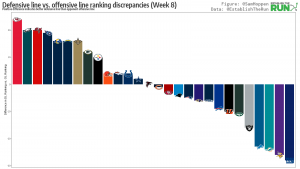 The Vikings traded away their best pass-rusher in Yannick Ngakoue to the Ravens and now have cemented themselves into a bottom five pass-rushing unit for the rest of the season barring major developments from some of their younger players. This bodes well for the top five pass-blocking Packers that have their superstar left tackle David Bakhtiari back in the lineup after missing Week 7 with a chest injury.

The Giants interior defensive line is a strong, deep group but all are better run-defenders than pass-rushers (still solid in the latter) and are matched up against a Bucs interior that has two elite players on it in left guard Ali Marpet and center Ryan Jensen.

On the outside the Giants have one of the worst groups of rushers in the NFL so they likely won’t be able to capitalize on the Bucs biggest weakness in left tackle Donovan Smith while also not having a major threat to face off against rock solid rookie right tackle Tristan Wirfs.

The Raiders defensive line will likely be missing a key member of their outside rotation with Arden Key missing practice on Thursday, weakening an already below average unit. They had some very impressive flashes last week from defensive tackle Maliek Collins but need more consistency from him before considering him a significant threat. The Browns still don’t have their best lineman in Wyatt Teller back from injury so Collins has a shot at building off his best game in Week 7, but the rest of the Browns’ line should be able to mitigate the bulk of the Raiders pass-rush. 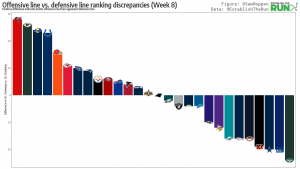