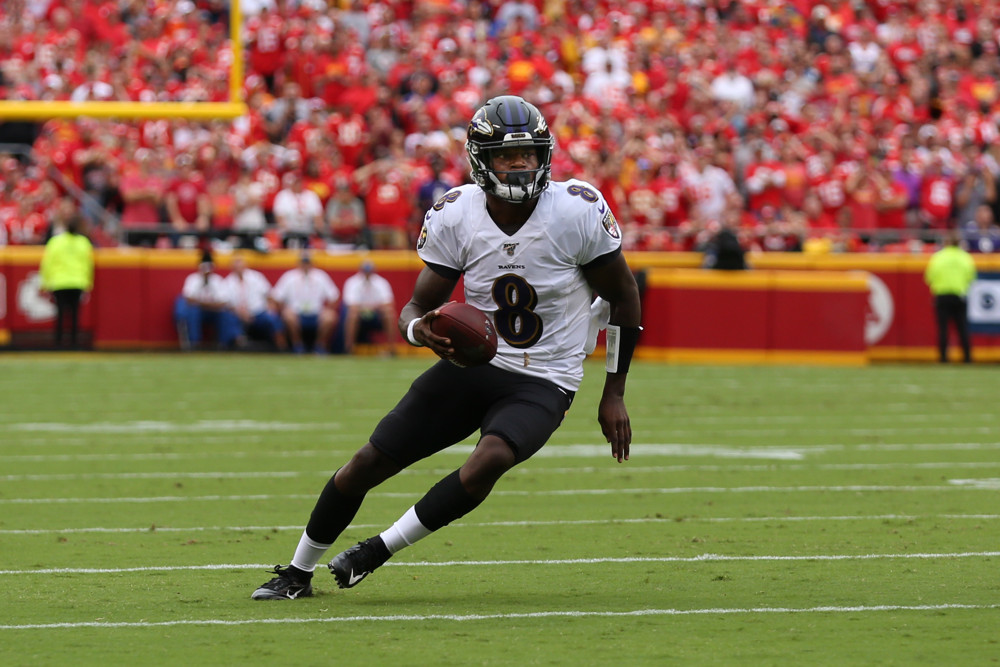 Editor’s Note: We may not write up every player we consider to be a top play. Be sure to consult the chart at the bottom of the page. This article will be updated once on Sunday morning, if necessary.

QUARTERBACK
Lamar Jackson ($7300 DK, $8600 FD) — Bengals are dead last in yards per play allowed. Jackson has been in this article every single week thanks to an outrageous floor/ceiling combo. Has scored 26 or more DK points in 6-of-8 games.

Jameis Winston ($6800 DK, $7900 FD) — Ideal setup as both the Cardinals will match the Bucs’ pace and they play a lot of zone, which Winston has destroyed.

RUNNING BACK
Christian McCaffrey ($10500 DK, $10500 FD) — Price continues to climb, now as the Panthers go on the road as a dog. Certainly easier to fit on soft-priced Fanduel. That said, matchup is tasty as Packers are 26th DVOA against the run and allowed the 7th-most receptions to RBs.

Ronald Jones ($4300 DK, $6300 FD) — Named the starter for Week 10 after passing up Peyton Barber in Week 9. Will lose pass-down work to Dare Ogunbowale and get breathers from Barber, but touch projection relative to price is strong. Arizona allows 4.41 YPC on the season and opponents run the 5th-most plays per game against them.

WIDE RECEIVER
Michael Thomas ($8300 DK, $8700 FD) — As noted in Matchups, Thomas has at least 89 yards and/or a touchdown in all eight games this year. Falcons allowing 4th-most fantasy points per game to wideouts.

AJ Brown ($4300 DK, $5500 FD) — With Corey Davis (hip) doubtful and Delanie Walker (ankle) out, target share gets pushed to Brown, Adam Humphries and Tajae Sharpe. Brown’s explosive size/speed combo is intriguing in a game the Titans will need to throw to keep up.

TIGHT END
Travis Kelce ($6700 FD) — Difficult to fit on DraftKings, but stands out on Fanduel with Patrick Mahomes expected back. Kelce is tied for the league lead with nine targets inside the 10-yard line this season, but has zero TDs.

Mike Gesicki ($3100 DK) — Freak athlete lining up in the slot on the overwhelming majority of his snaps. Ranks third among all tight ends in Air Yards over last four weeks.

Rhett Ellison ($2500 DK) — With Evan Engram out, we can project the slow-footed and stone-handed Ellison to play every snap. A punt option specific to DraftKings.

DEFENSE
Ravens ($4000 DK, $5000 FD) — Ryan Finley’s first NFL start comes without AJ Green (ankle) and against one of the league’s most talented secondaries.

Saints ($3700 DK, $5000 FD) — Top DL>OL mismatch from Thorn this week. And we can project Matt Ryan to be among the slate’s leaders in dropbacks thanks to the Falcons’ offensive identity plus the probability they’re playing from behind.

Colts ($3500 DK, $4900 FD) — The talent-devoid Dolphins have taken the third-most sacks in the league and thrown the most interceptions. And they’ve already had their bye.

Steelers ($2600 DK, $4100 FD) — One of the league’s premier pass rush units is at home against a quietly struggling Jared Goff – whose struggles are accentuated by pressure.