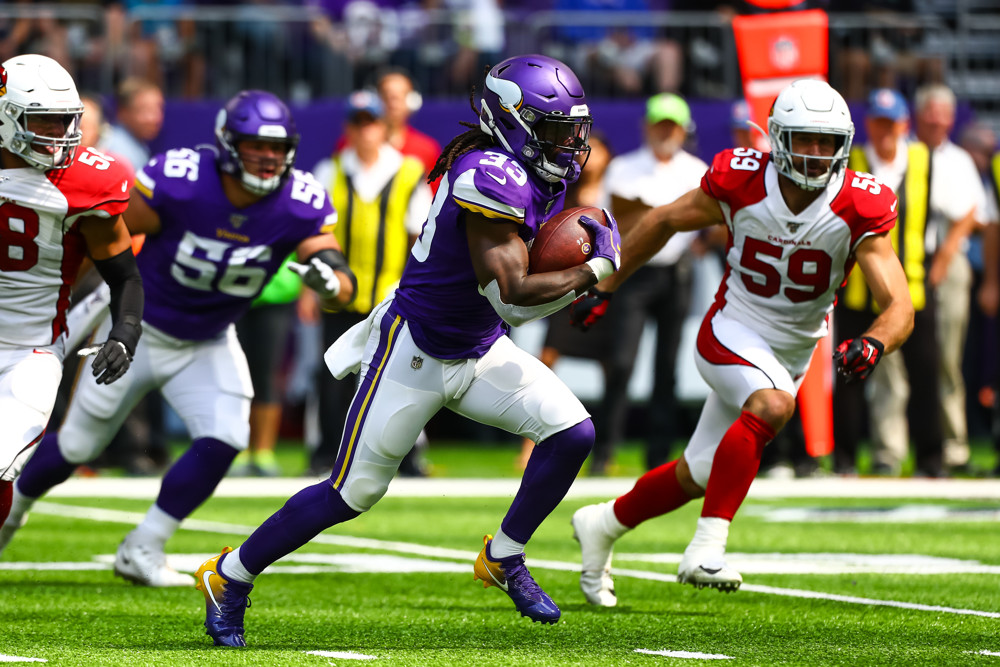 QUARTERBACK
Lamar Jackson ($7700 DK, $8800 FD) — Texans were already 23rd in yards per play allowed. Now they’ll play without JJ Watt. Jackson is a bit better on Fanduel due to softer cap and no 300-yard passing bonus, but is very strong on both sites once again.

Kyle Allen ($5300 DK) — A DraftKings-specific play. We suspect the Falcons’ defensive performance last week was a bit fluky. They remain 31st in pass defense DVOA and 29th in yards per pass attempt allowed. Allen has at least 30 pass attempts in six straight games.

RUNNING BACK
Christian McCaffrey ($10500 DK, $10500 FD) — A better play this week than in Week 10 because the top-end WR plays aren’t as strong. Also a better game environment as the Panthers host a Falcons team which ranks 25th in yards per play allowed.

Ezekiel Elliott ($9000 DK, $8400 FD) — In play on DraftKings, but a better play on touchddown-heavy Fanduel where he’s relatively cheaper. Injuries to Matthew Stafford (out, back) as well as the Lions defensive front bodes well. Concern is a weaker pass-game role than Dalvin Cook.

Dalvin Cook ($8900 DK, $8600 FD) — Unique combo of talent, efficiency and usage. Dalvin has seen at least 25 touches in four straight games. Brandon Allen making his first road start plus Adam Thielen (hamstring) being out are both positives for Dalvin.

Josh Jacobs ($6900 DK, $8000 FD) — Best possible setup for Jacobs. Home against a woeful Bengals team which is 29th in rush defense DVOA, dead last in carries faced per game and 31st in yards per carry allowed.

Tevin Coleman ($6100 DK, $6700 FD) — Raheem Mostert and maybe Jeff Wilson will fill some of the Matt Breida (out, ankle) role. But we can still project a bump in usage for Coleman against a Cardinals team allowing opponents to run the most plays per game in the league.

Brian Hill ($4800 DK, $5900 FD) — With Devonta Freeman and Ito Smith both out, Hill gets a crack at the feature back job. Kenjon Barner and Quadree Ollison will mix in, but the path to 20 17+ touches for Hill is clear. Note that the Panthers are a run funnel, ranking 3rd DVOA against the pass and dead last against the run.

* Miles Sanders ($4100 DK, $5600 FD) — If Jordan Howard (shoulder) sits, the Eagles will be down to Sanders, Boston Scott and Friday addition Jay Ajayi. Sanders, a true three-down back with major pass-game chops, would be staring 15+ touches in the face. SUNDAY UPDATE: Jordan Howard will not play. We’re still expecting Ajayi to step right in for 5-8 touches and Scott to see some change-of-pace work. But we can safely project Sanders for 10-15 carries and most of the pass-game work in a median outcome. Sanders is a far better play on DraftKings, where he’s cheaper and benefits from full-PPR.

WIDE RECEIVER
Michael Thomas ($9900 DK, $9000 FD) — Best possible matchup against a funneling Bucs defense which is the NFL’s best against the run. Thomas is far cheaper on Fanduel but fits DraftKings’ full-PPR scoring system to perfectly.

Mike Evans ($7400 DK, $8200 FD) — Marshon Lattimore shadowed Evans in Week 5, helping to hold him catchless on five targets. Lattimore (hamstring) is out Sunday. Evans is significantly cheaper on DraftKings, relative to the cap.

DJ Moore ($5900 DK, $6000 FD) and Curtis Samuel ($5300 DK, $6300 FD) — Moore has a huge role in both short-area and deep pass game. Has seen at least nine targets in four straight games. Samuel’s opportunity has been elite, but the box score has been mostly empty. Now they catch a Falcons defense allowing the sixth-most ppg to WRs.

John Brown ($5900 FD) — A Fanduel-specific option. The $5900 tag is extremely low given Brown has at least four catches in every single game and faces the Dolphins.

Calvin Ridley ($5500 FD) — Another Fanduel-specific play based on price. Boosted by Austin Hooper’s injury, James Bradberry sticking to Julio Jones, injuries to the Panthers secondary and presence in the Buy Low Model.

Mohamed Sanu ($5100 DK, $5800 FD) — Will play 100% of the snaps against a funneling Eagles defense. Already has Tom Brady’s trust and will be open against Ronald Darby.

Deebo Samuel ($4000 DK) — A DraftKings-specific salary saver. With George Kittle doubtful and Emmanuel Sanders questionable, Samuel is penciled in as the clear-cut No. 1 target against Arizona’s bottom-barrell pass defense. SUNDAY UPDATE: Emmanuel Sanders will play through his rib injury. It makes Samuel the No. 2 WR, but that’s still a reasonable role with George Kittle out and Patrick Peterson likely on Sanders. Deebo is quite weak on FD given the other options in his salary range.

TIGHT END
Darren Waller ($5500 DK, $6700 FD) — Waller’s results have been ugly of late, but the elite usage remains. DraftKings price is depressed once we account for the fact they adjust for wildly soft Bengals matchup.

Greg Olsen ($3900 DK, $5100 FD) — Olsen’s usage has been amongst the fantasy-friendliest for a tight end all season. He’ll run just as many routes as Travis Kelce or Zach Ertz this weekend.

Saints ($2900 DK) — Priced too close to Vikings/49ers/Raiders/Patriots on Fanduel. But on DraftKings, we get cheap exposure to Jameis Winston turnovers.

Redskins ($2800 DK, $4000 FD) — Sam Darnold has four interceptions and taken 13 sacks in the last three weeks alone. Against the Jags, Dolphins and Giants.