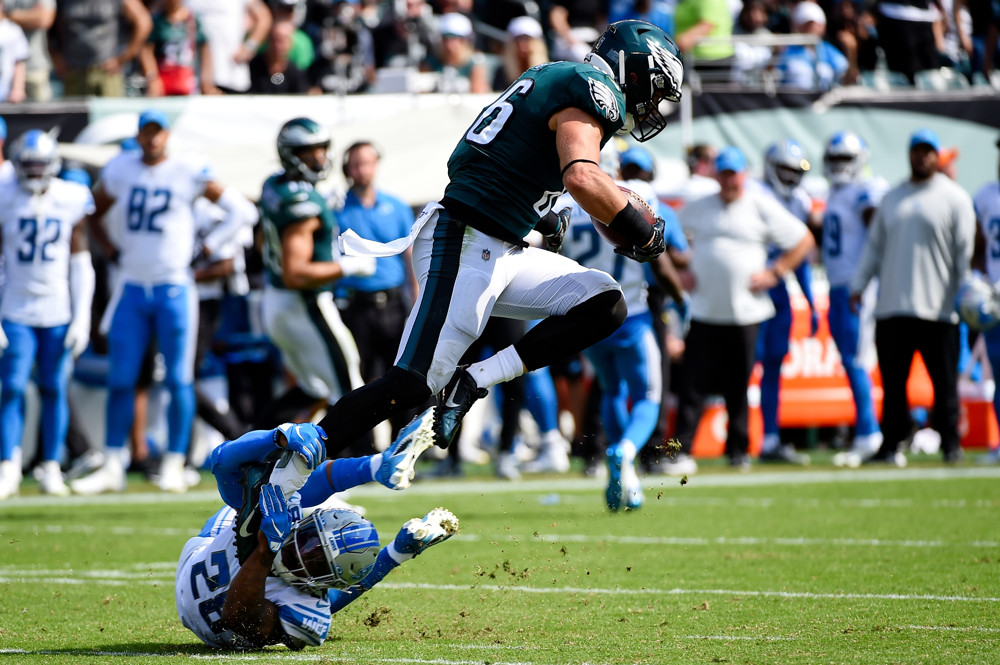 Editor’s Note: The Week 16 Establish The Run tournament on DraftKings is live! Click here to enter. It’s a $3 buy-in, 3-entry max with 3,000 entries. No rake and added prizes. To see Adam Levitan’s lineup review of previous winners, check out our YouTube page.

Russell Wilson ($7000 DK, $8300 FD) — Cardinals rank 29th in yards per attempt allowed and 32nd in completion percentage allowed. They also allow opponents to run the most plays per game. Ceiling is strong in this matchup/environment, but note Wilson has gone over 20 DraftKings points in just 5-of-14 games.

Andy Dalton ($5200 DK) — A DraftKings-specific punt that lacks a ceiling due to brutally slow weaponry. Can also consider Dwayne Haskins ($4700) in this total punt range.

RUNNING BACK
Christian McCaffrey ($10100 DK, $10800 FD) — Panthers’ decision to get a look at rookie Will Grier creates a wider range of outcomes for McCaffrey. Still, we know he’ll play every snap as the primary goal-line and pass-game option. Bigger issue on this slate is the strongest mid-range value is at RB, making it very difficult to find optimal roster construction paths to CMC.

Alvin Kamara ($7500 DK, $7200 FD) — Usage has been as strong as previous years, but chunk plays and touchdowns are way down. The latter can spike back up at any time. Kamara is significantly cheaper on Fanduel, but a floor of four catches has a lot of value on DraftKings.

Joe Mixon ($6600 DK, $7800 FD) — Bengals have consistently chosen to saddle up Mixon regardless of game scripts. He has at least 16 touches in seven straight games, averaging 23.4 during that span. The Dolphins are 29th in rush defense DVOA and allow the most opponent touchdowns per game.

Devonta Freeman ($6000 DK, $6200 FD) — Extremely cheap on Fanduel, but in play on both sites thanks to a solid workload (82% of the RB touches last week) and pristine matchup. Jags have allowed an absurd 5.91 YPC to opposing running backs over the last five weeks.

Melvin Gordon ($5600 DK, $7000 FD) — A bit of risk here as Gordon was benched for a stretch after two fumbles last week. But Gordon had at least 17 touches in his previous six games and is no-doubt priority at the goal-line. He has 11 carries from inside the 5-yard line in just 10 games played.

Dion Lewis ($4300 DK, $4800 FD) — Derrick Henry will rest in this meaningless game against the Saints. Expect FB Khari Blasingame to get some power work and practice-squad callus Dalyn Dawkins to be ready for emergency work. But we can project at least 60% of the RB touches for Lewis, who will also play in passing situations. That’s important with the motivated Saints in town. Lewis is relatively cheaper on Fanduel, where he’s just $300 over minimum.

DeAndre Washington ($4000 DK, $5600 FD) — Josh Jacobs will not play. Expect Washington to start and handle roughly 60% of the RB touches. Jalen Richard will get the rest.

WIDE RECEIVER
Michael Thomas ($9300 DK, $9000 FD) — Thomas and Julio Jones stand out at a very weak WR position on this slate. Injuries and downright poor play have plagued the Titans secondary all year as they’ve sunk to 22nd in pass defense DVOA.

Julio Jones ($8000 DK, $8000 FD) — Showed the shoulder is no concern by catching 13-of-20 targets in San Francisco last week. While 20 targets is obviously unrealistic, Julio’s target projection does get a boost with Calvin Ridley (abdomen) sidelined.

DeVante Parker ($6900 FD) — Parker is a far, far better play on Fanduel where he’s cheaper and the scoring is more weighted to touchdowns. In play on DraftKings, but only if you believe the nine combined targets Clive Walford and Isaiah Ford got last week will tick back towards Parker this week.

Keenan Allen ($6300 DK, $6700 FD) — In what could be Philip Rivers last home game as a Charger, his favorite battery mate draws a clean matchup. Raiders are dead last in yards per pass attempt allowed. Even with Rivers struggling badly, Allen has at least 13 DK points in five straight. Teammate Mike Williams ($5000 DK) is a salary-saver in the same matchup.

Larry Fitzgerald ($4200) — A slate context kind of play. With the mid-range so weak at WR, taking a low-ceiling cheap play in an effort to fit stronger plays in elsewhere is a viable roster construction. Fitz would benefit greatly if Christian Kirk (ankle) sits or is limited. Greg Ward, also $4200 on DraftKings, is a similar option.

TIGHT END
Zach Ertz ($6400 DK, $6900 FD) — The Eagles are down to Greg Ward as their No. 1 wideout again. That means an alpha pass-game role for Ertz, who has at least 10 targets in five of his last six games. Cowboys’ defensive scheme is susceptible to tight ends — they allowed the third-most catches to the position this year and sixth-most last year.

Hunter Henry ($4700 DK, $6100 FD) — Lack of recent targets a major concern and tons of mouths to feed, but in game flows where Henry gets back around eight targets he’s set up well. Raiders have allowed second-most fantasy points to tight ends.

Austin Hooper ($4400 DK, $6000 FD) — Hooper resumed his full-time role last week and got six targets in a game Julio Jones got an unsustainable 20. Hooper was fantasy’s No. 1 tight end at the time of his Week 10 injury and his DK price peaked at $6000. Major discount here.

Jacob Hollister ($4200 DK, $5700 FD) — Luke Willson is back, but he hasn’t played since Nov. 3. We suspect the pass-catching role remains with Hollister, who draws a historically good matchup against the Cardinals.

Giants ($2800 DK, $3900 FD) — Dwayne Haskins has taken 27 sacks and thrown seven interceptions in eight games. In the even the Giants take a lead and force Haskins into dropbacks, there’s upside.