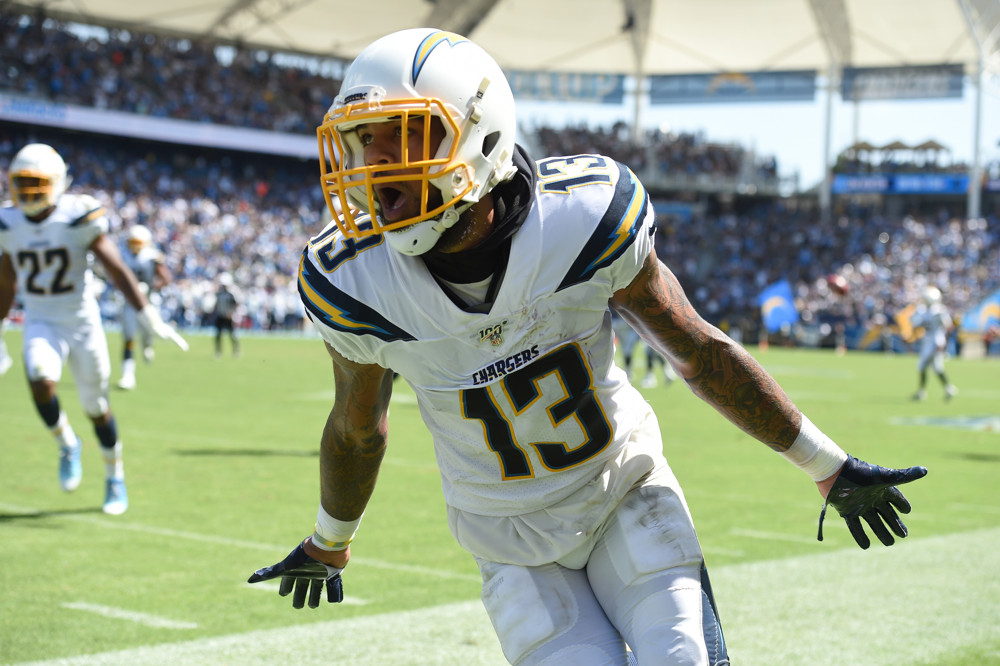 With all that said, these are our favorite Week 3 DFS plays. They are listed in price descending order (NOT ranked by “best play”). If a player’s salary is only listed for one site, we believe the price to be prohibitive on the unlisted site. This could still mean he is a viable GPP play, we just wouldn’t consider him a very strong option.

Lamar Jackson ($7000 DK, $8500 FD) — Going to Arrowhead is never easy, but quarterbacks who have the 100-yard rushing bonus in a significant portion of their range are in play every single week.

Dak Prescott ($6500 DK, $8400 FD) — Price on DraftKings has been slow to adjust to Dak’s role/efficiency in this exciting Kellen Moore offense. Sunday’s home game against the Dolphins will be the best on-paper matchup he sees all season. Expect Dallas to hang at least 30 on the board before they call the dogs off.

Josh Allen ($5900 DK, $7500 FD) — DraftKings bumped Allen’s price by $600, but Fanduel left him right where he was last week. He’s still underpriced relative to an extremely fantasy-friendly rushing/high-aDOT style, particularly against the Bengals. Since Allen returned from an arm injury in Week 12 last year, only Patrick Mahomes and Deshaun Watson have averaged more fantasy points per game at the quarterback position.

Kyler Murray ($5800 DK, $7200 FD) — Murray has thrown for more than 300 yards in both of his games despite facing Detroit and Baltimore. Now he gets a far softer matchup at home against Carolina. Even if Murray’s hesitation to run continues, he’s a strong value on both sites via his arm alone.

Kyle Allen ($4000 DK) — Whereas Daniel Jones is $5000 on DraftKings, Kyle Allen comes in at stone minimum for a quarterback. Given how expensive the best plays are at the running back position, roster construction on DK can open up significantly by taking a chance here. Allen draws one of the best possible matchups for a QB due to Arizona’s pace plus lack of defensive talent and has an exciting supporting cast in CMC, DJ Moore, Curtis Samuel and Greg Olsen.

Saquon Barkley ($9100 DK, $9200 FD) — Todd Bowles’ overachieving 3-4 defense is a concern, particularly when we’re talking about the most expensive player on the slate. But with Danny Dimes set to give a jolt and an offensive line playing very well, Barkley’s upside remains intact.

Ezekiel Elliott ($8900 DK, $8800 FD) — Cowboys coaches confirmed this week it’s time to take the training wheels off of Zeke now that he’s three weeks removed from the holdout. It’s ideal timing as Cowboys OL vs. Dolphins DL is Brandon Thorn’s No. 1 mismatch. Expect Zeke to be in there racking up yards and touchdowns until the Cowboys get a 21-point or more lead in the second half.

Christian McCaffrey ($8700 DK, $8900 DK) — Given the way injured Cam Newton was playing, the move to Kyle Allen is not a significant downgrade for the Panthers skill players. That includes CMC, who will likely play 100% of the snaps in a game Carolina projects to run more plays than they’ll run in any other game all year.

Dalvin Cook ($7800 DK, $8300 FD) — The Raiders defensive front is a strength, but Dalvin’s scheme/talent/usage combo is among the league’s best. He already has 46 touches through two games and the Vikings will likely be able to implement their preferred scheme in this one — Establishing the MFing Run.

Austin Ekeler ($7200 DK, $7600 FD) — The sites can’t adjust Ekeler’s price fast enough as the ultra-talented multi-purpose back has out-touched Justin Jackson 41-15 through two weeks. Ekeler came into the season averaging .12 catches per snap and he’s right at that massive rate again this year.

Chris Carson ($5900 DK, $7000 FD) IF Rashaad Penny is out — Penny hurt his hamstring during Friday’s practice and is questionable. Note that he siphoned off 37% of the RB carries last week as Carson’s fumble issues persisted. But if Penny sits, we can project the suddenly pass-game relevant Carson to handle at least 75% of the RB touches.

Rex Burkhead ($3900 DK, $4600 FD) — With James White out and the Patriots three touchdown favorites, Burkhead figures to get double digit touches about as cheaply as you’ll ever find them. Likely to step into the primary pass-catching RB role, Burkhead offers an excellent value from a point per dollar standpoint.

Jordan Wilkins ($3500 DK, $5100 FD) IF Marlon Mack is out — Mack is shaping up as a game-time decision due to a calf injury. If he can’t go, the versatile Wilkins will step into the feature role with Nyheim Hines as the pass-catching specialist. The matchup at home vs. Atlanta is one of the best possible for a running back.

Julio Jones ($7300 DK) — Jones’ price on DK sticks out like a sore thumb. The last time he was cheaper than this was November of 2014. Even in a non-ideal matchup against a deep-zone defense/slow-paced Colts team, Julio is a value.

Keenan Allen ($7000 DK, $7800 FD) — With Hunter Henry out and Mike Williams gimpy, Philip Rivers is predictably locked onto the short-area domination of Keenan. A matchup with the Texans yields shootout possibilities plus a matchup in the slot with converted outside CB Bradley Roby.

Sammy Watkins ($6800 DK, $7100 FD) — Watkins’ box score was ugly in Week 2, but he benefited from Tyreek Hill’s absence to the tune of an alpha 29.5% target share. As noted in Silva’s Matchups, the depleted Ravens secondary is struggling in terms of big plays and slot coverage — which fits nicely with Watkins’ role.

John Brown ($5500 DK, $5900 FD) — Brown’s separation and efficiency on deep balls fits perfectly with Josh Allen’s aggression down the field. It’s no surprise it’s resulted in 14-195-1 already this season. Brown is outrageously cheap on Fanduel, particularly given a dream home matchup against the Bengals.

Larry Fitzgerald ($5100 DK, $5900 FD) — The “play Larry Fitzgerald early in the season” narrative is in full effect. Simply put, Fitzgerald’s price doesn’t reflect his usage thus far, with 13 and 11 targets in Weeks 1 and 2. With catches of 54 and 45 yards already on the year, it’s reasonable to wonder whether Fitz “still has it” or whether positive variance has just been on his side thus far.

Nelson Agholor ($3600 DK, $4800 FD) IF Alshon Jeffery is out — With DeSean Jackson out and Alshon Jeffery questionable, Agholor becomes the Eagles’ theoretical No. 1 wideout if Alshon sits (he didn’t practice at all this week). Agholor’s projected target-to-price ratio will make him massively owned and difficult to ignore. That said, Zach Ertz and JJ Arcega-Whiteside are both serious threats to out-score him in a significant portion of outcomes.

James Washington ($3500 DK) — In DK roster constructions which jam in three expensive RBs, we’ll be forced to take chances on cheap WRs. Donte Moncrief has been benched, leaving us confident Washington will have a full-time role against the 49ers. Simultaneously, Washington is playing with the quarterback he’s had incredible success with at both Oklahoma State (198-4,016-33 in three seasons) and in the last two preseasons (17-366-3). Shower narrative, Team Preseason and Team Usage all in one spot.

Devin Smith ($3400 DK) — Agholor, Washington, Arcega-Whiteside and Smith are the “punt” WR options on DraftKings. Smith will fill the Michael Gallup role — a spot that had him leading the team in both targets and Air Yards. Smith, who beasted during the preseason, couldn’t hand-pick a better matchup as the only talent in the Dolphins secondary (Xavien Howard) will likely be shadowing Amari Cooper.

Zach Ertz ($5700 DK, $6900 FD) — Carson Wentz loves throwing to Ertz so much that coaches have had to work with the QB on spreading the ball to other people. But given the injuries to DeSean Jackson, Alshon Jeffery and Dallas Goedert, Ertz’s target projection Sunday arguably leads all TEs.

Evan Engram ($5200 DK, $6400 FD) — Sterling Shepard returns from concussion, but this remains among the league’s worst wideout corps. Engram’s freak talent will be on full display now that preseason star Daniel Jones has replaced the corpse of Eli Manning.

Mark Andrews ($4600 DK) — With a ridiculous 16-220-2 line through two games, and priced a cut below the Tier 1 TE’s, Andrews is sure to catch heavy ownership. Averaging around 50% of team snaps per game, ran routes on 63% percent of Lamar Jackson’s dropbacks last week.

Cowboys ($4300 DK, $5000 FD) — Josh Rosen starting doesn’t change the fact that the Dolphins don’t have the talent to compete at the NFL level. Easier to fit DAL D on Fanduel.

VIkings ($3300 DK, $4200 FD) — Play volume is the only concern here as the Vikings dominating time of possession isn’t good for defensive stats.

49ers ($3700 FD) — A bargain on Fanduel, but priced appropriately on DraftKings. Wide range of outcomes on slow-footed Mason Rudolph, but we know this talented 49ers front can get after the QB.

Chargers ($2500 DK, $3800 FD) — Another massive DL>OL mismatch as noted by Brandon Thorn. Deshaun Watson takes more sacks than any QB in the league.