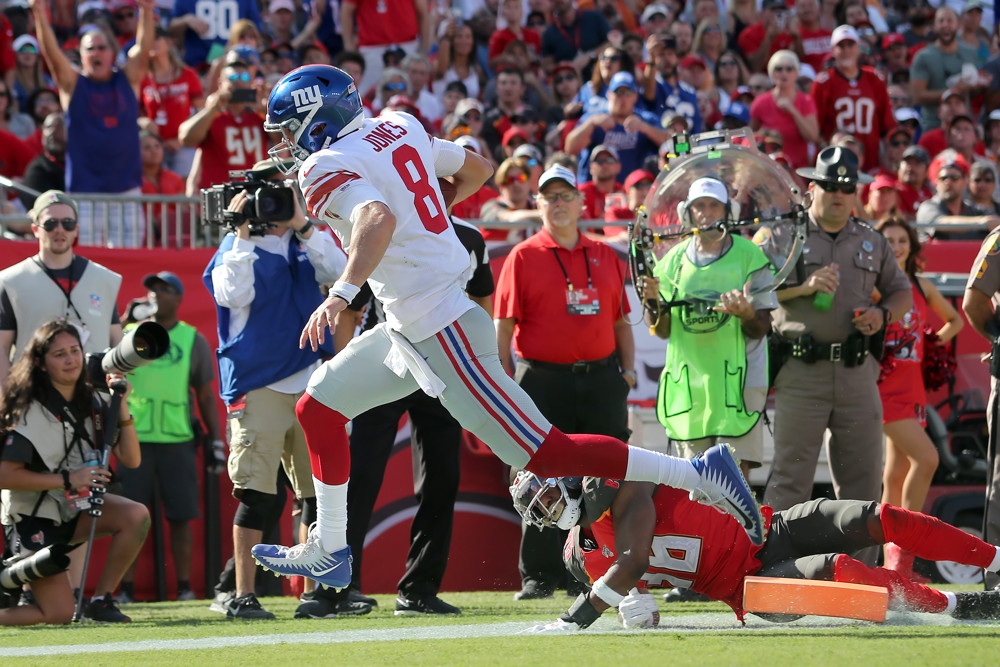 With all that said, these are our Top Plays considering the following factors: Median projection, matchup, upside, and value. Ownership is not considered here. Generally speaking, these players are what we consider to be “head-to-head and 50/50 considerations.” They are listed in price descending order (NOT ranked by “best play”). At the bottom, you’ll find suggested rankings by site once salary is accounted for.

QUARTERBACK
Patrick Mahomes ($7500 DK, $9200 FD) – Mahomes has now hit the 300-yard bonus in 13 of his 19 games over the last two seasons. He also has at least three TDs in 13 of those. With top CB Darius Slay (hamstring) and other members of the Lions defense banged up, Mahomes is easily the highest raw projected QB on the week.

Lamar Jackson ($6900 DK, $8300 FD) – As Jackson showed last week, his legs give him a massive floor even when his inconsistent arm is failing. Home against a banged up Browns secondary is a nice spot to rebound after last week’s understandable struggles in Arrowhead.

Jared Goff ($6300 DK, $7700 FD) – It’s a bit of a perfect storm for Goff, who has some of the most drastic home/road splits in the league. He’s also fared far better against man coverage in his career, which is what the Bucs primarily play. And the Bucs have shown early signs of being a funnel defense, ranking 13th DVOA against the pass but 2nd against the run.

Russell Wilson ($6100 DK, $7800 FD) – As Matthew Stafford, Lamar Jackson and Kyle Allen have already found out, facing Arizona is the best possible matchup for a quarterback. The Seahawks project toward the top of their range in plays run and get to tee off on a Patrick Peterson/Robert Alford-less secondary. The risk is only in the Seahawks getting a lead through their defense or special teams and Russ finishing with fewer than 25 attempts as Brian Schottenheimer again logs onto #TeamEstablishTheRun.

Daniel Jones ($5300 DK, $7300 FD) – Anyone who played preseason DFS with us knows Jones’ regular season debut was not a fluke. The two rushing TDs (on four rushing attempts) last week obviously won’t happen again, but he ran for 1,323 yards and 17TDs in three seasons at Duke. This week’s matchup is almost as good as last week’s — the Redskins are 26th in PFF’s coverage grades and 28th in pass rush.

RUNNING BACK
Christian McCaffrey ($8800 DK, $9000 FD) — As expected, Kyle Allen was an upgrade over the 2019 version of Cam Newton. This week’s matchup is more difficult, but McCaffrey playing 100% of the snaps and getting featured in the pass game is the nut role.

Austin Ekeler ($8000 DK, $8100 FD) – Justin Jackson (calf) is out. Austin Ekeler will only be backed up by borderline NFL player Troymaine Pope and we’re not projecting more than a few touches for Melvin Gordon. It sets up as a spot for Ekeler to push toward 20 carries for the first time all year — this time against the league’s least talented defense.

David Johnson ($6800 DK, $6800 FD) – Huge pass-game floor as the checkdown option, has 12 catches in his two full games so far. Efficiency is a major concern against a stout Seahawks front, but note DJ also has the goal-line role. Johnson is far cheaper on Fanduel relative to DraftKings.

Marlon Mack ($6100 DK, $7300 FD) — With TY Hilton (quad) in doubt and a home game against the Raiders, we can expect a full-blown Establish The Run gameplan from the Colts. Mack’s floor/ceiling combo is capped by his lack of pass game role, but he reaches 20 carries in this spot at large portion of the time.

Kerryon Johnson ($5400 DK, $6500 FD) – With CJ Anderson gone and Paul Perkins not expected to have a role, Kerryon’s usage is trending up in a big way. He’s now the unquestioned goal-line back and a threat for 20+ touches in the right game flow. Efficiency isn’t a concern against the Chiefs — the concern is the Lions getting behind big and going to Ty Johnson for 30% or more of the RB snaps.

Wayne Gallman ($4600 DK, $5800 FD) – The only backs behind Gallman Sunday are fullback-type Eli Penny and unimpressive practice squad callup Jon Hilliman. Anything less than 15 touches for Gallman Sunday would be a surprise and there’s a floor here because of his strong pass-game ability. Gallman has recorded .09 catches per snap in his NFL career and has a good chance at 60 snaps Sunday.

WIDE RECEIVER
Julio Jones ($7800 DK, $8500 FD) — Similar spot to last week against the Colts. Makes for a natural tournament pivot off Keenan Allen and has a slightly higher median expectation than DeAndre Hopkins and Odell Beckham.

Keenan Allen ($7600 DK, $$8100 FD) – Mike Williams is out, Hunter Henry remains sidelined and Travis Benjamin is doubtful, adding to the Chargers’ weaponry woes. Philip Rivers is locked onto Allen anyway, targeting him on an absurd 36% of his attempts so far this season.

Cooper Kupp ($6500 DK, $7000 FD) — Establishing himself as Jared Goff’s favorite target and clearly 100% off the ACL tear, Kupp draws a very plus matchup against a funneling Bucs defense which plays a lot of man and is getting wrecked by slot men. Stacks with Goff, Kupp and one of Robert Woods/Brandin Cooks are very much in play. Woods popped bigly in the Buy Low Model this week.

Marquise Brown ($5800 DK, $5700 FD) — Brown has the second-most Air Yards over the last two weeks but his box score during that span is “just” 10-135-0. Lamar Jackson clearly loves throwing to Hollywood, who has 27 targets through three games. The next closest Ravens wideout has nine targets (Willie Snead). Meanwhile, Browns starting CBs Denzel Ward and Greedy Williams are both banged up.

Christian Kirk ($5100 DK, $5900 FD) — Kirk’s price on both sites refuses to move even though he’s seen 31 targets through three games. Given the state of the Cardinals offensive line, Kliff Kingsbury’s pass-centric, quick-hitting, double-slot scheme and this funneling matchup, Kirk’s floor in PPR is high.

Dontrelle Inman ($3000 DK) — With Travis Benjamin doubtful, Mike Williams out and Hunter Henry/Virgil Green out, the Chargers are desperate at the pass-catcher position. Inman is likely to play near 100% of the snaps against the Dolphins at stone minimum. On full-PPR DraftKings, he’s in play as a punt. The veteran had three catches on just 24 snaps last week.

TIGHT END
Travis Kelce ($7200 DK, $7600 FD) — As noted in Matchups, Kelce has five red-zone targets and zero touchdowns so far. He’s tougher to fit on DraftKings than Fanduel, but has a massive floor/ceiling combo on both sites.

Evan Engram ($5700 DK, $6800 FD) — As expected, Daniel Jones injected life into the Giants as a whole and specifically matchup nightmare Evan Engram. He’s a bit too close to Travis Kelce ($800 difference) on Fanduel, but on DraftKings we save a much-needed $1500 by coming down to Engram.

Darren Waller ($5200 DK, $6700 FD) — Waller’s usage is truly elite and he faces a Colts zone defense which funnels targets to the middle of the field. The only issue is price as he’s now nearly as much as Evan Engram. That will likely lead to depressed ownership.

Greg Olsen ($4200 DK, $6000 FD) — Olsen has not looked old this season. He’s second among all TEs in Air Yards and Kyle Allen has shown a tendency to throw to tight ends — albeit in a small sample.

Will Dissly ($3600 DK, $5400 FD) — The Cardinals have been wrecked by TJ Hockenson, Mark Andrews and Greg Olsen already. They say they’re focused on cleaning their TE defense up, but Dissly comes in getting a boost via the Nick Vannett trade. We’re unsure how much Luke Willson will play. The negatives on Dissly are he’s unlikely to run a route on more than 60% of Russ Wilson’s dropbacks, he is a 9th-percentile athlete with a 4.87 forty, is just one year removed from a patellar tear and there are always volume concerns with the Seahawks pass game.

Editor’s Note: There may be minimal, if any, distinction between different players at a roster spot. For example, the No. 4 RB may be nearly as good or just as good of a play as the number 1 RB. There may also be players not on this list that some ETR staff members may consider cash game viable. Player descriptions above may not be updated, but this list will be updated at least once on Sunday AM.