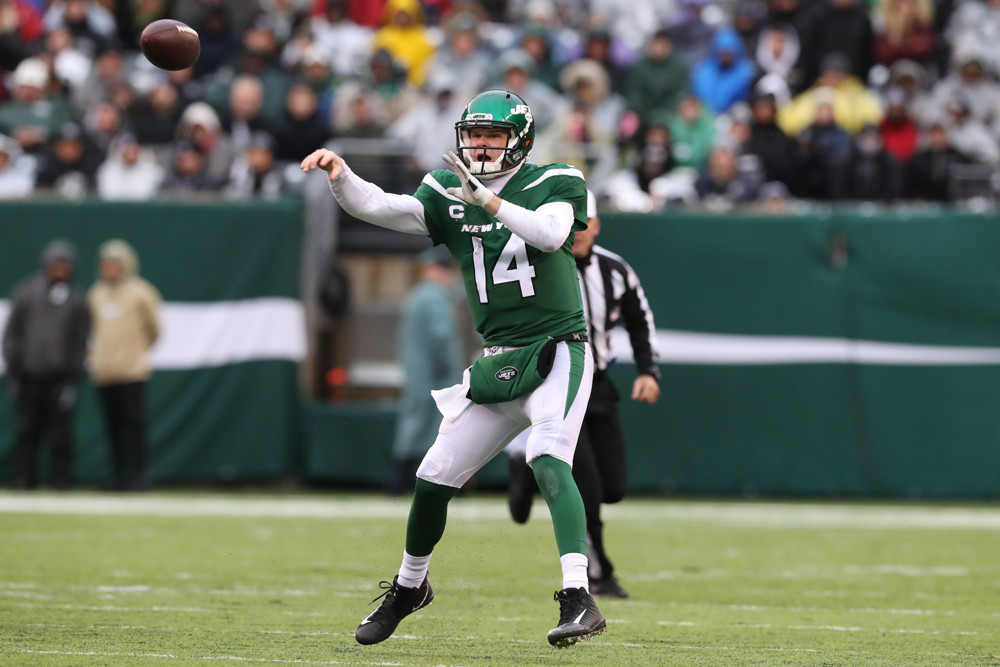 Especially after coach Mike Tomlin declined to name his Week 16 starter following last Sunday night’s defeat, Devlin Hodges’ four-pick, four-sack meltdown against Buffalo puts him at risk of an in-game benching with Pittsburgh’s team urgency at full throttle at the bottom of a heated AFC Wild Card race. Hodges dropped back to pass a season-high 42 times against the Bills, and the results were disastrous. On fantasy scores of QB23 > QB25 > QB23 > QB30 through four starts, Hodges’ fantasy stock is near the bottom of two-quarterback-league barrels. The Jets’ D/ST is in Week 16 streamer play. … James Conner returned from injury to pace the Steelers’ backfield in Week 15 touches (12) and snaps (58%), while Jaylen Samuels (3, 29%) and Benny Snell (2, 3%) assumed firm backseats. Conner didn’t immediately resume true workhorse usage, however, and now faces one of the NFL’s best run defenses on the road. Conner did draw five targets and nearly doubled Samuels’ routes run (22 to 12). The Jets have permitted the NFL’s fifth-most receptions to running backs (82), keeping Conner in the low-end RB2 conversation.

Hodges’ 2019 target distribution: Diontae Johnson 26; James Washington 24; Conner 12; Samuels and Nick Vannett 8; JuJu Smith-Schuster and Vance McDonald 7; Tevin Jones and Johnny Holton 3; Snell 2. … On a low-volume passing team that is inefficient when it does throw with its quarterback potentially on a short in-game leash, Smith-Schuster’s (knee) return throws a wrench into his teammates’ volume projections. The Steelers got minimal production at slot receiver during JuJu’s four-game absence, and are now fielding a target monster there. … Johnson is the lone Steelers pass catcher at whom I might throw a long-shot dart. He popped as Week 16’s No. 3 buy-low player in Josh Hermsmeyer’s Air Yards Model and has been slightly less dependent than Washington on JuJu’s absences for production. … Washington averaged just 33 yards over Pittsburgh’s initial seven games but has improved to a 77.3-yard average over his last six, most of which has coincided with Smith-Schuster’s injury. Washington is a high-risk WR4. … McDonald resumed fully practicing this week and looks on track to return from his concussion, further spreading out Pittsburgh’s target distribution. McDonald is an unexciting, touchdown-or-bust streamer without a game above 40 yards all year. He’s scored once since Week 2.

Fortunate to emerge from last Thursday night’s at-Baltimore bout with Week 15’s fantasy QB19 score, Sam Darnold’s Week 16 matchup is even tougher against a Steelers team that’s fielded the NFL’s best defense for two months. Darnold is at major risk of seeing ghosts again; Pittsburgh ranks first in the NFL in sacks (49), first in QB hits (101), and has held 10 of its last 12 quarterbacks faced to fantasy results of QB14 or worse. Per Sports Info Solutions, no offense has allowed pressure at a higher rate than the Jets (45%) over the course of the season, while no defense has created pressure at a higher rate than the Steelers over the last five weeks (46%). Darnold is a poor two-QB-league play. Pittsburgh’s D/ST remains an every-week start. … Although this may be billed as a “revenge” game for Le’Veon Bell in some circles, it is also a revenge game for Pittsburgh against Le’Veon, who held out for an entire season after the Steelers offered him a long-term extension and over $14 million for one year on the franchise tag. Narratives aside, Bell’s main obstacle is Sunday’s severe mismatch between Pittsburgh’s dominant defensive front and Gang Green’s matador line; the Steelers rank No. 2 in tackles for loss (102), while New York’s front five has allowed the league’s eighth-most TFLs (83). All told, the Steelers have held enemy backs to 3.82 yards per carry and just six TDs in 14 games. Bell is a low-floor, low-ceiling RB2.

Darnold’s 2019 target distribution: Jamison Crowder 89; Robby Anderson 71; Demaryius Thomas 47; Bell 46; Vyncint Smith 23; Ty Montgomery 12; Bilal Powell 10; Daniel Brown 6. … His results have been all over the place, but Crowder’s Weeks 13-15 target counts were a robust 9 > 7 > 11, and he has more targets, catches (58), yards (632), and touchdowns (5) on throws from Darnold than any other Jet. The Steelers have no tangible secondary weaknesses at this point, but Crowder is Gang Green’s best PPR pass-catcher bet based on volume. Crowder has a chance to rack up low-aDOT, quick-hitting catches in the slot with Darnold likely spend most of Sunday under duress. … This game sets up more poorly for Anderson, whose game is built on big plays; Pittsburgh has yielded the NFL’s sixth-fewest 20-plus-yard completions (39). As is typically the case, Anderson is a boom-bust WR3 option with a lower floor than Crowder but more theoretical upside. … Battling knee and hamstring injuries at age 32, Thomas is safe to ignore against the Steelers. Smith started in Thomas’ place last week and drew five targets, catching three for 40 yards against the Ravens. … Brown started for Ryan Griffin (ankle, I.R.) in Week 15 and drew two targets on 49% of the Jets’ offensive snaps. Brown isn’t a compelling streamer versus Pittsburgh.