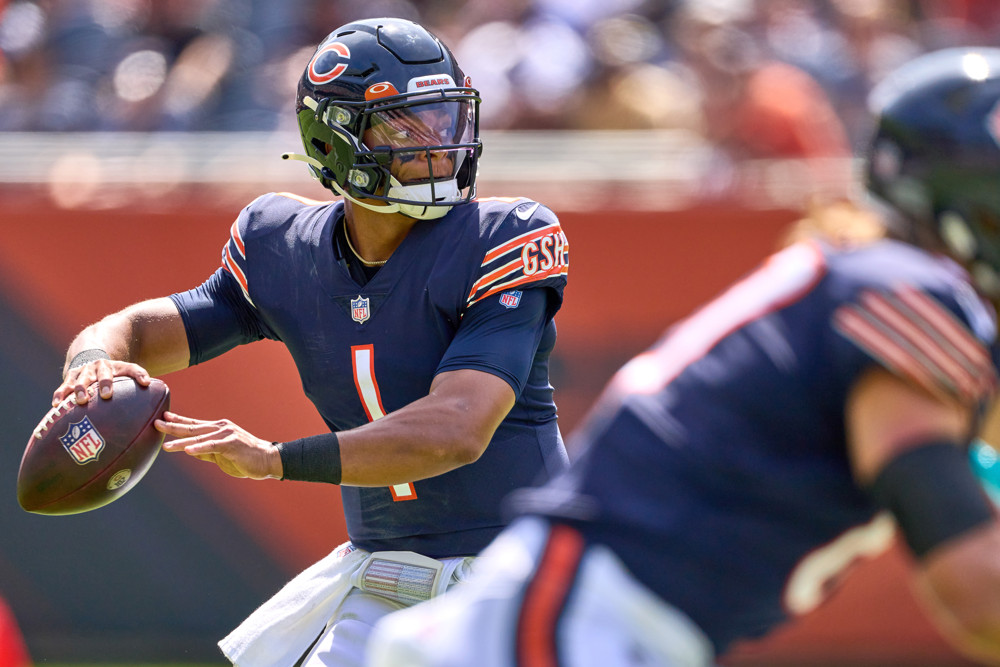 I play roughly 60% of my action each week in “cash games.” Cash games refer to any contest in which roughly 50% of the field gets paid out, such as head-to-head, double up or 50/50. I try to get as much head-to-head action as I possibly can every week and then supplement that with other cash games. 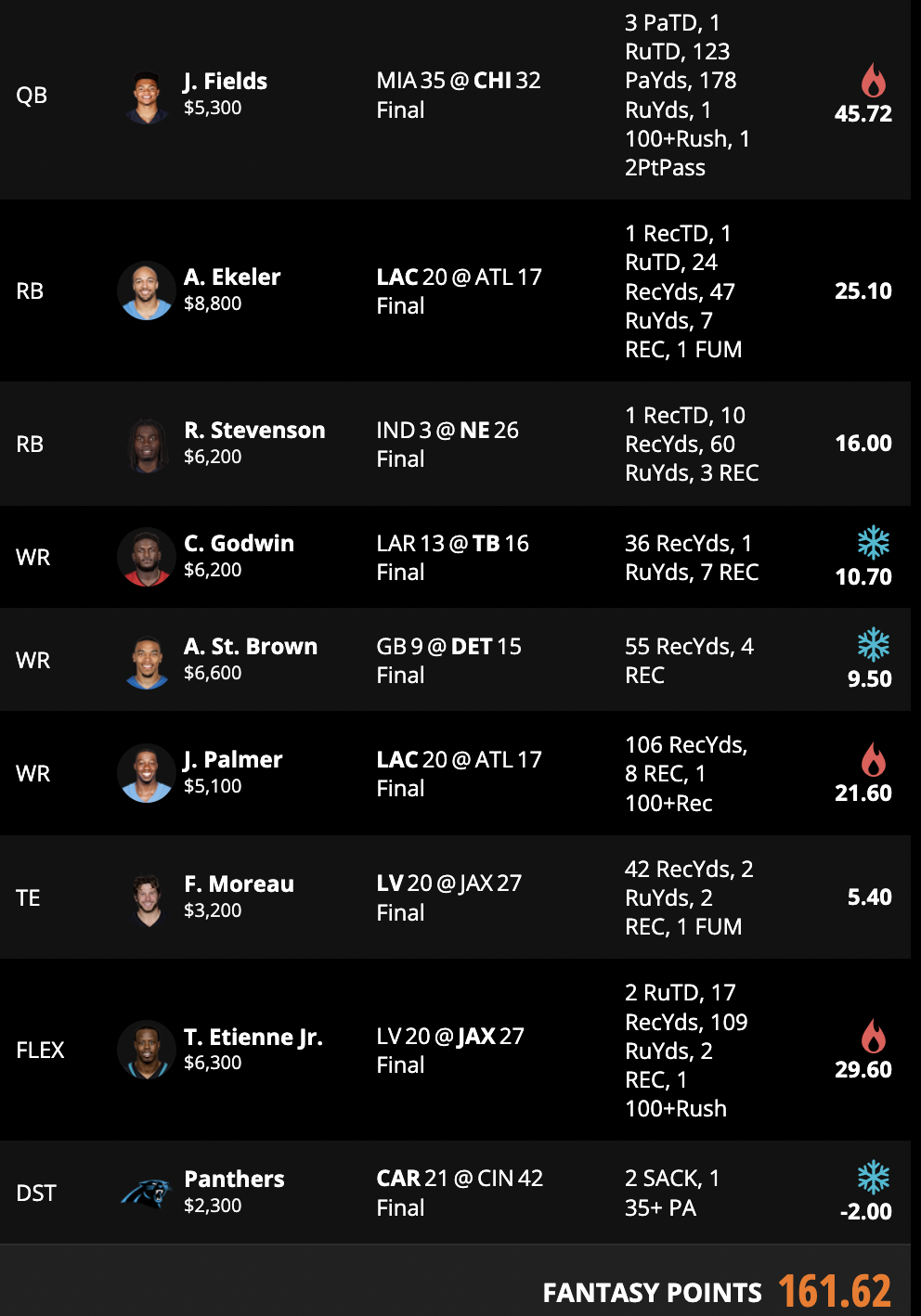 This was yet another slate with very little to chew on cheaply at RB or WR. So, like most of the slates we’ve had lately, we were going to have to sacrifice a really good play somewhere. To me, the big decision was whether to sacrifice Josh Allen or Austin Ekeler.

MY MUST PLAYS
* The Chargers were facing a woeful Atlanta defense ranked 31st in yards per play allowed. Meanwhile, Mike Williams and Keenan Allen were both out. Although the running back position was extremely strong, the floor/ceiling combo of Austin Ekeler in this spot was something I couldn’t live without. He came into the game with an absurd 19.8% target share and 12.0 carries per game. The role is just absurd in terms of high-value touches.

* I’m not sure how DraftKings came up with Travis Etienne’s price. With James Robinson gone, Etienne is a legit threat for 25+ touches weekly. A true 3-down plus goal-line back. So in a home game against the woeful Raiders, $6300 was an egregiously low price.

* I was always playing three running backs on this slate. And I was going to play Joe Mixon as my third RB. Much like ETN, Mixon was a three-down plus goal-line back in a home game against the Panthers at just $6500. Regardless of what you think of Mixon’s efficiency and talent, 20+ touches (including all goal-line work and a ton of pass-game work) in this spot at that price is a good play.

But once Damien Harris (illness) was ruled out, I certainly preferred Rhamondre Stevenson. I thought there was a good chance Stevenson would handle 90+% of the RB touches, making him a similar play to Mixon but for $300 less. We had Stevenson for 22.0 points and Mixon for 19.3 in projections.

* Last week, Foster Moreau ran 41 routes on 41 Raider dropbacks with Darren Waller (hamstring) sidelined. Waller was ruled out again Sunday morning, and Moreau was just $3200. This is exactly the kind of spot I’m looking for when punting tight end in cash.

Note that if Waller had played, I was prepared to either totally punt it off with Brock Wright at stone minimum $2500, or get to Evan Engram for $100 more than Moreau.

* This was an outrageously good spot for Josh Palmer. The Falcons have one of the NFL’s worst defenses, their secondary is extremely banged up, it’s in a dome, and Keenan Allen/Mike Williams were out. Even if Palmer is only an average NFL talent, he clearly separated from the rest of the Chargers WRs. So at just $5100 on a slate I needed to save money, Palmer was a lock in the context of the slate. There was just no way to get to DeAndre Hopkins, Davante Adams, Stef Diggs, Justin Jefferson, or Cooper Kupp if I was playing Ekeler.

* I expected the Packers to find their offense in the Coors Field of today’s NFL, Ford Field. And with TJ Hockenson + DJ Chark + Josh Reynolds all out, plus D’Andre Swift limited, we actually expected Amon-Ra St. Brown to see 31% of Jared Goff targets. That’s a truly elite number for a very talented player in a dome game at $6600.

MY WANT PLAYS
* I looked at lineups that included both Josh Allen and Austin Ekeler. They would have had to punt a WR spot and play Brock Wright, or play two really thin WRs – something like Kalif Raymond, Terrace Marshall, or Zay Jones. On a full-PPR site with 100-yard bonuses, I wasn’t comfortable double punting with no floor or ceiling. So given that I considered Ekeler a must, I had to come off Allen.

And if I was coming off Allen, I wasn’t doing it halfway. For example, there was no way I would go to a $7400 Kyler – he’s just too close to Allen. I had to save as much as I could at QB to avoid punting a WR spot and still fitting the three RB locks.

When I do punt at QB like this, I like to do it with running quarterbacks – the floor/ceiling combo is so much higher than the pocket sloths. And if you’ve been paying attention to Justin Fields lately, you know he’s turned a corner with both designed runs and as a thrower. The addition of Chase Claypool for “10-35 snaps” couldn’t hurt. And the Dolphins were really likely to push the Bears out of a run-heavy script.

That’s different than Marcus Mariota, who wasn’t a lock to be pushed and even if he was I didn’t trust the Falcons to be aggressive. We had Fields as the third-best QB value on the slate at just $5300.

* The problems of the Bucs offense coupled with concerns over Chris Godwin’s explosiveness made him far from a lock. But that’s why he cost just $6200, and the short-area volume he gets is great for cash. Even if Godwin can’t find open space, he’s the slot man Tom Brady checks to. I preferred the safety of that to Tyler Lockett, who relies a bit more on big plays.

* The cheap defenses I liked were the Seahawks $2500, Commanders $2400, and Panthers D/ST $2300. In this lineup, I only had enough room for the Panthers. Given Joe Burrow’s absurdly high sack rate and the absence of Ja’Marr Chase, I was fine with it. As usual, I’m just going to play what fits at defense.

Week 9 Results
Anytime I have six players I consider stone locks, I feel good about my team. Of course, when there are six locks a lot of people feel the same way and get pushed onto the same lineup. This has nothing to do with “cheating” or “collusion” – this was just a really good team that was very easy to get on.

On weeks like this where I think my team will be duplicated a ton, I try to focus even more on head–to-head rather than double ups. I’m just really likely to only get partial money back in double ups because of the size of the train. This week, I played 211 head-to-heads and 65 of them had my same lineup. Which is totally fine because DraftKings automatically refunds the rake on the ties. And any matchup that didn’t duplicate mine, I consider very good action.