Miller: The Running Back Dead Zone 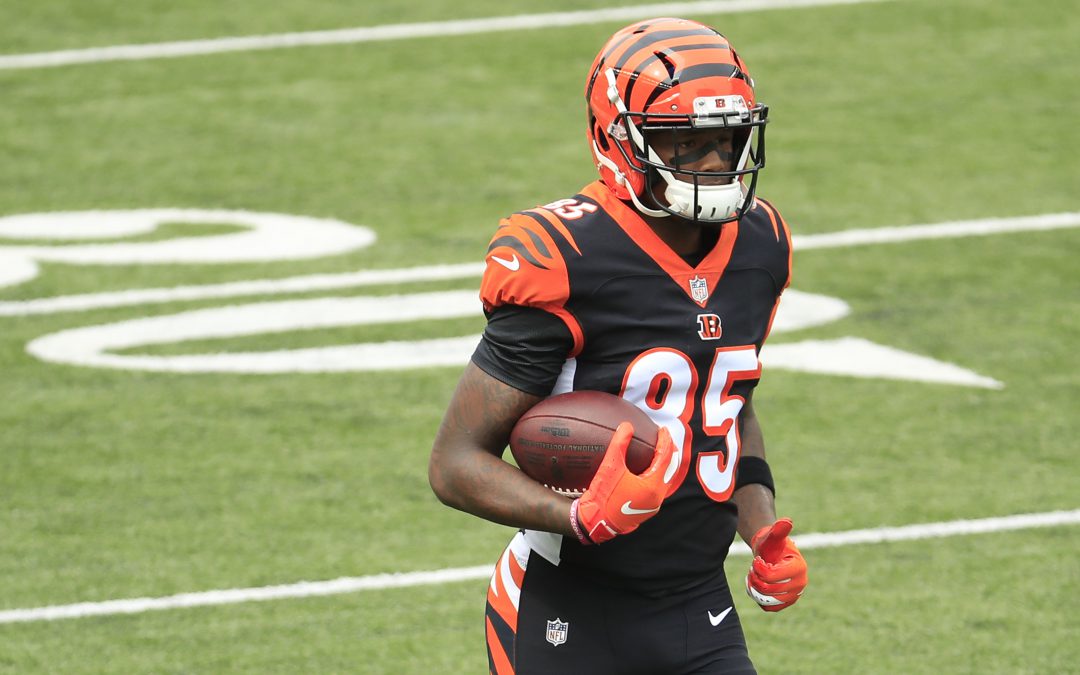 IMPORTANT Editor’s Note for NFL FANTASY PLAYERS: Underdog Fantasy is offering ALL ETR subscribers an unbeatable deal! Anyone who purchases the ETR Draft Kit will receive a $10 site credit. First-time Underdog customers will receive an additional $25, making our Draft Kit nearly free if you haven’t tried Underdog yet!  After purchasing our Draft Kit, follow the instructions here to claim your reward.

A lot of fantasy players think of best ball roster construction as how many of each position you should draft, but it also refers to the manner in which you build your team. For example, most drafters adhere to the late-round quarterback strategy because the difference between the best QBs and lower-tier ones doesn’t justify spending a premium pick on the position, although that dynamic is shifting a little bit. In a similar vein, we can apply that logic to running backs and wide receivers to see when it makes the most sense to target each position. The graph below uses local regression to plot how many points RBs and WRs have scored over the last six seasons by best ball ADP. 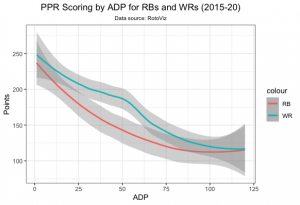 You can see how much faster RB scoring drops off compared to WR. Basically, RB scoring is in free fall after the first two rounds, and then it flattens out in the later single-digit rounds. That’s well-documented at this point, and it’s why RBs fly off the board early in drafts. It also reinforces the takeaway from my last article, which investigated the macro-level trend of WR scoring tightening at the top. As you can see, WR scoring doesn’t harshly fall until you’re outside the top-50 overall picks.

We can take advantage of this by hammering WRs in Rounds 3-6, sometimes known as the “RB dead zone.” In doing this, we minimize opportunity cost by getting comparable WR scoring at a much lower price. The actual drop isn’t until Round 6 or so, but you need to start targeting WRs earlier because there are three starting spots. In other words, Round 5 WRs have been the best value over the last six seasons, but you need to load up on them before that because you only get one pick per round. By starting to pound WR in Round 3, you lock in three or four high-end options while minimizing capital spent.

Furthermore, WRs score more raw fantasy points than RBs at every point in the first 10 rounds. Because of that, it’s almost always optimal to get a WR in your flex spot. A WR going in Round 5 is just as productive as an RB going two rounds earlier, so you’re donating points if you plan to start three RBs every week. This should alleviate concerns about taking too many WRs, especially for those who draft one WR in the first two rounds. By having so many good WRs, you’re guaranteeing yourself an advantage over your opponents in the flex. In fact, Rounds 3-6 is when the difference is greatest between RBs and WRs, supporting the idea that you need to go WR-heavy in that range.

Another way to look at this is using player win rate data. Remember, the expected win rate for any player is 8.3% (100 percentage points divided by 12 teams per league). WRs picked in Rounds 3-6 have averaged an above-expectation win rate in six consecutive seasons. RBs picked in that area have been below-expectation for six straight years. It doesn’t get much easier than that: One group has been above-average six times in a row, while the other has been dependably below-average.

It’s fun to think you can consistently pick the right players (i.e. identify the trend-breakers), but that’s much easier said than done. Just know that RBs in Rounds 3-6 have historically been a -EV bet, whereas WRs have been rock-solid.

WHEN SHOULD I PICK AN RB?

Of course, you have to pick RBs at some point. Taking a high-end RB (or two) in the first two rounds sets your team up nicely, but that’s not always possible. Thankfully, RBs in Rounds 7-10 have also performed admirably since 2015. While the trend isn’t as obvious as it is in Rounds 3-6, RBs in that range have been at least average in four of the last six seasons. Their WR counterparts haven’t been bad, but they haven’t flashed the same upside.

You can see in the first graph that RB scoring is relatively flat from Round ~4 onward, so it makes sense that win rates are higher in Rounds 7-10. Why spend a Round 4 pick on an RB when you can get comparable production 3-5 rounds later?

Right now, only 11 RBs have an ADP in Rounds 3-6 on Underdog. Over the previous six seasons, there was an average of 18.0 RBs picked in that range. 25 WRs are going there compared to an average of 22.3 since 2015. It’s also important to keep in mind that I’m using PPR data, so owners might be happier to wait on WR on a half-PPR platform like Underdog.

Interestingly, it seems like fewer RBs are being picked in that range this year because the position is being pushed up rather than down. 16 RBs have an ADP inside the top 24 picks this year, compared to an average of 11.2 over the last six years. This also raises the question of why those RBs are being pushed up, but that’s a thought for another day.

Furthermore, six QBs have an ADP within the first six rounds. Basically, it’s less that drafters are fading RBs in the dead zone and more that RBs and QBs are going earlier than before. Because of this, you’re still going to want to target WRs in Rounds 3-6 as much as possible.

On the whole, the data paints a clear picture of how to attack your best ball drafts: