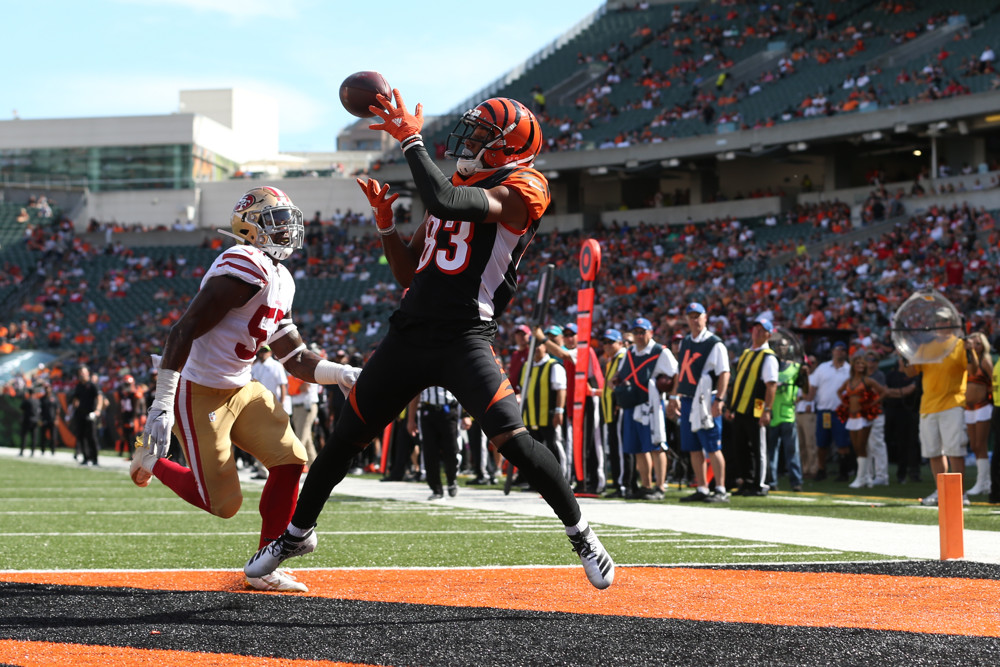 1. Dwayne Haskins’ slow-but-tangible progress combined with Terry McLaurin’s improving results should enhance confidence in McLaurin as a bankable WR2 with WR1 upside in this plus draw. He should have little trouble disposing of Giants outside CBs DeAndre Baker and Sam Beal, who’ve combined to concede 807 yards (9.4 YPA) and eight TDs (9.3% TD Rate) on 86 targets.

McLaurin ($6200, 9-12%) has been something of a contrarian favorite of ours when he’s been healthy, and last week he flashed his sneaky elite upside with 5-130-1 at his mid-tier price. Coming off two straight games with touchdowns, he’s now priced up competitively with players such as Keenan Allen ($6300, 13-16%), Cortland Sutton ($6200, 13-16%) and Jarvis Landry ($6000, 2-4%). We think Scary Terry is past the point of sneaking up on people in tournaments, but considering some options around him will clearly be more popular, we still think there is merit here in GPP’s. He’s benefitted from some solid matchups, but Adrian Peterson ($5000, 9-12%) has quietly put up at least 65 yards and a touchdown in each of his last three games and his usage is still quite strong. This is an acceptable tournament play for us, ideally in small to medium sized formats where Peterson’s combination of solid value, lack of receiving upside and modest ownership are appealing.

For the Giants, there are no standout value plays, so there should be some contrarian appeal here. Golden Tate’s ($4800, 2-4%) price has slipped quite a bit, and we think he’s a good target in GPP’s. Sterling Shepard ($6100, 2-4%) should be very unpopular due to price and recent performance and would be a good target if needing an ultra low-owned play on anotherwise chalky roster. Saquon Barkley’s ($8300, 5-8%) price is back up to elite RB1 status, but we don’t think the matchup justifies heavy DFS usage.

2. Denver should control Sunday’s contest with its rushing attack in positive game script, setting up a Phillip Lindsay bounce back following Week 15’s seven-carry dud. Lindsay averaged 17.5 touches over the previous month, while Detroit has been drilled for a 152.6 total-yard average and 19 TDs in 14 games by enemy backs.

Lindsay’s ($5300, 9-12%) price has not been inflated for matchup. There’s some usage risk here, but we think ownership should be low enough to make him a strong GPP target. Courtland Sutton ($6200, 13-16%) is an every-week GPP consideration for us with his target volume and talent. Noah Fant ($3700, 2-4%) is priced up enough to avoid heavy ownership and is a solid GPP option.

For the Lions, we are avoiding this backfield, as it’s next to impossible to predict what will happen on a week to week basis. Kenny Golladay ($6500, 2-4%) is coming off some rocky outings in a difficult matchup. Given his big play ability and likely lack of ownership, this is an interesting large-field GPP only option. Danny Amendola’s ($4900, 2-4%) role should stay expanded from what it’s been most of the year, but with the difficult matchup and nearly $5k price, we’re fine avoiding him here.

One such option for the Dolphins is Albert Wilson ($3800, 5-8%). While we’re hesitant to bet his season-high 80% snap rate from last week continues, he’s got the talent and opportunity to heavily exceed his price. DeVante Parker ($6800, 13-16%) is priced in WR1 territory, but is still a viable play in tournaments. Mike Gesicki ($3600, 2-4%) is a cash game consideration for some and thus an acceptable GPP play at a thin position.

4. Jarvis Landry is Week 16’s squeaky wheel after cameras caught him arguing with Freddie Kitchens about his usage against the Cardinals. Landry also happened to tally a season-high 167 yards in these teams’ Week 4 date, while fellow slot types have all produced at- or above-expectation PPR results against the Ravens within their last seven games. Popping as Week 16’s No. 1 buy-low receiver in Josh Hermsmeyer’s Air Yards Model, Landry is a confident WR2 play with an especially high ceiling this week.

With the way Lamar Jackson ($8000, 21-25%) dominates scoring and spreads the ball around, it’s hard to be that interested in the Ravens outside of Jackson. Marquise Brown ($5200, 5-8%) is the top stacking option by the numbers, while Mark Andrews ($5900, 5-8%) we think is going to have a difficult time paying off his price tag. We’re leaning towards playing Jackson alone and bringing him back with Landry as our preferred approach.

5. Zach Ertz’s path of destruction should continue against a Dallas defense giving up the NFL’s third-most catches and eighth-most yards to tight ends. Ertz leads all players at his position with a 10.8-target average over the last six weeks, banking 90-plus yards and/or a touchdown in five of them.

For the Cowboys, Ezekiel Elliott ($7900, 9-12%) has been quietly heating up, averaging over 24 touches and four receptions per game over his last three games. Considering this is a difficult matchup, we think there’s some appeal here in tournaments. Dak Prescott’s ($6400, 5-8%) ownership should be at least somewhat depressed given his hand injury, though there are legitimate concerns. We are comfortable taking a flier on him in GPP’s. We think Amari Cooper ($6700, 9-12%), Michael Gallup ($5500, 5-8%) and Randall Cobb ($4100, 0-1%) are all acceptable stacking partners with Prescott, and should be relatively contrarian options.