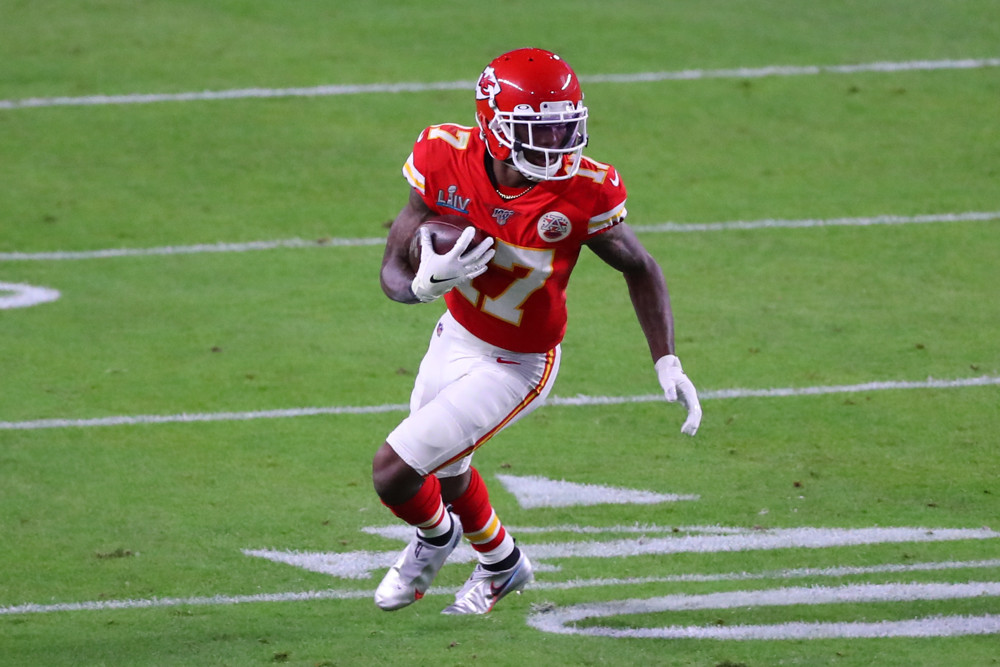 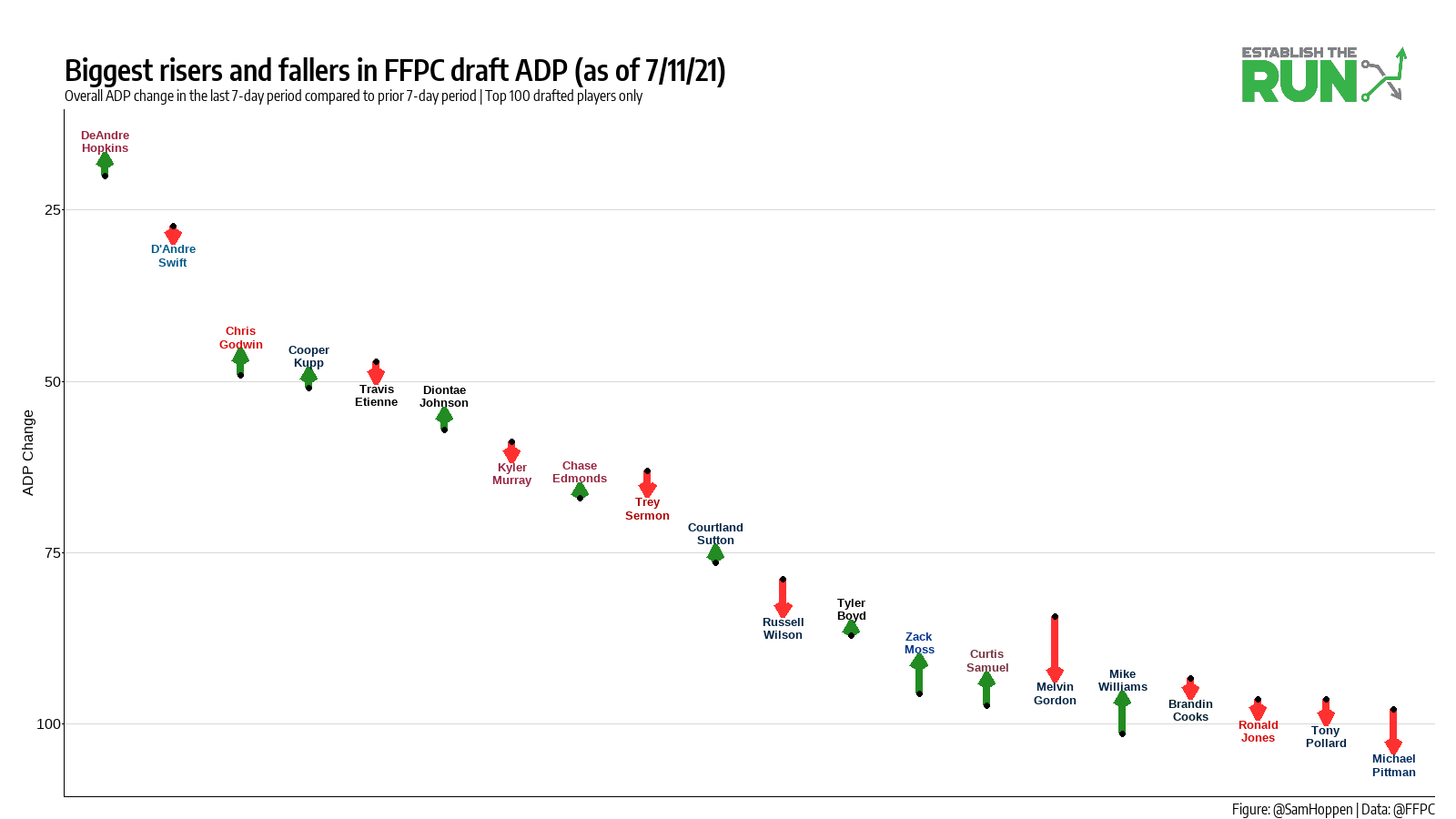 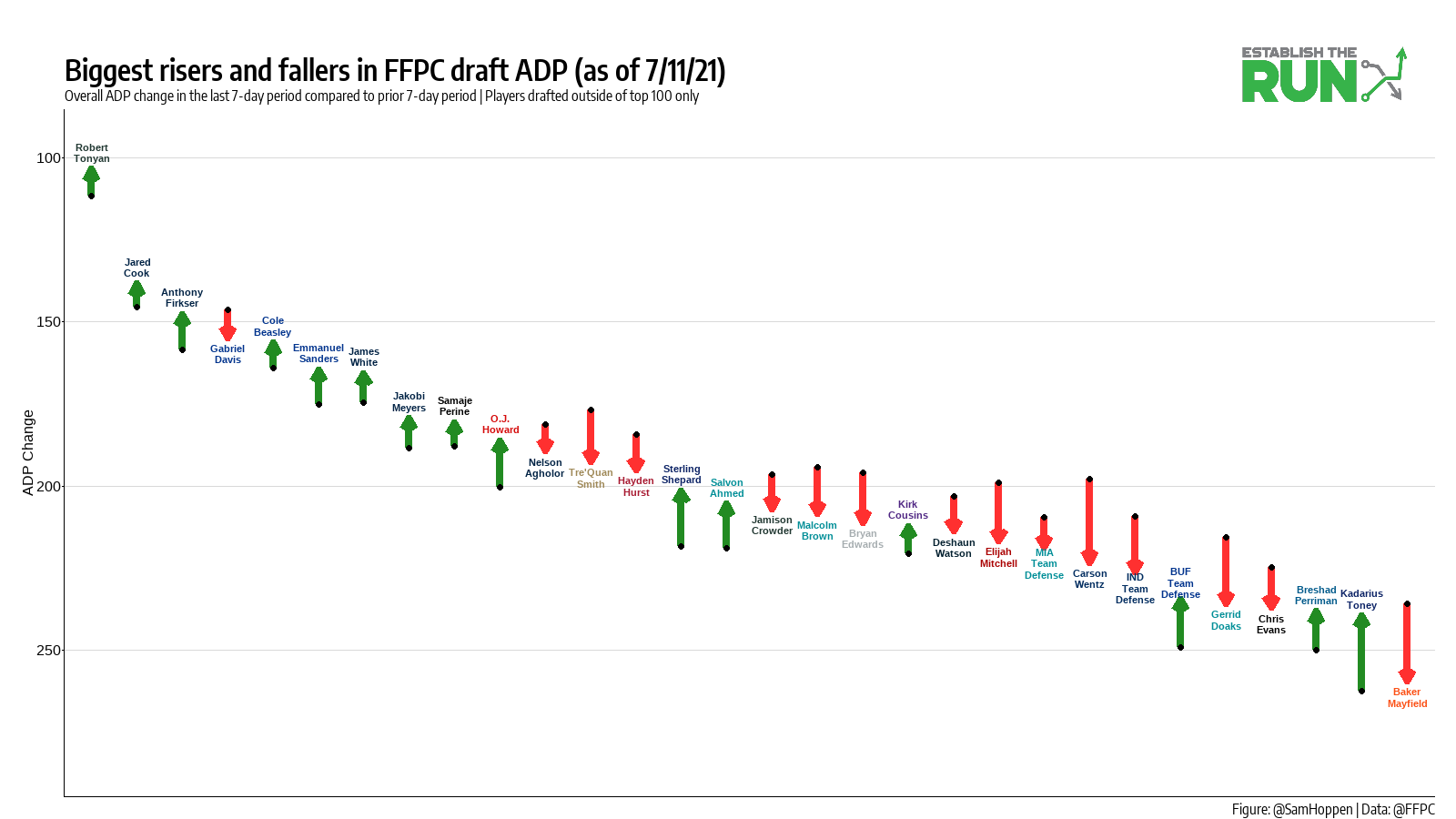 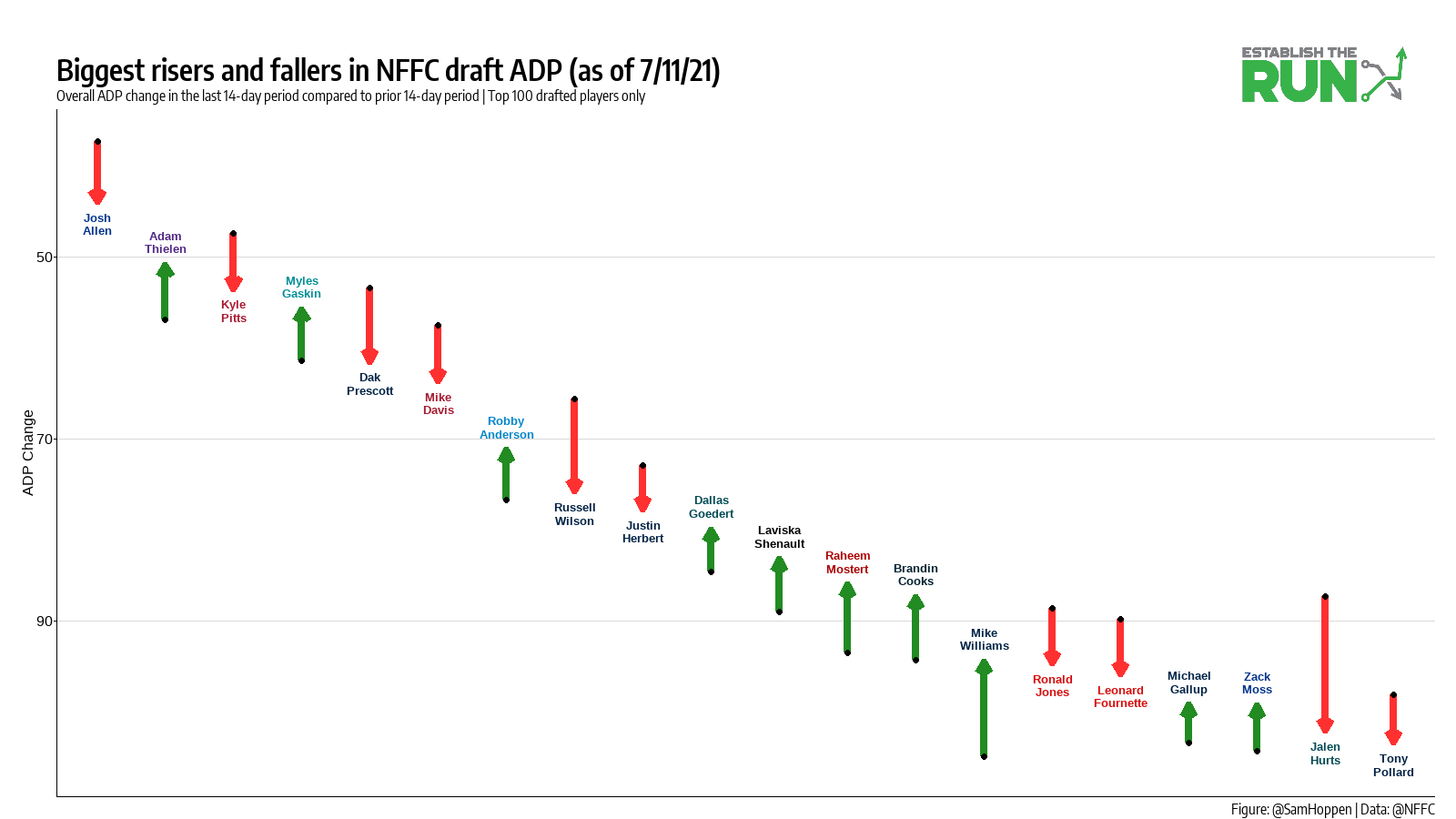 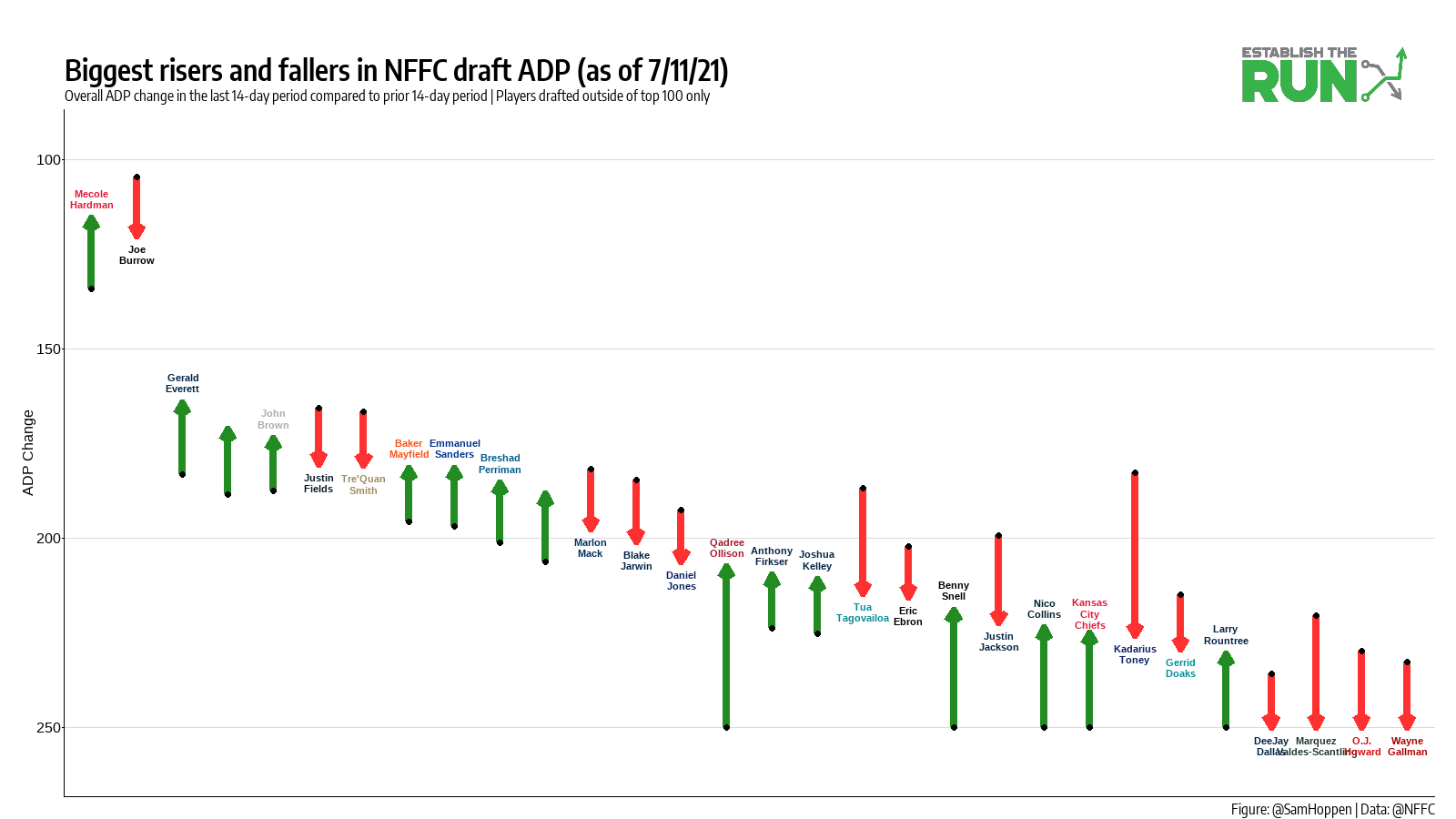 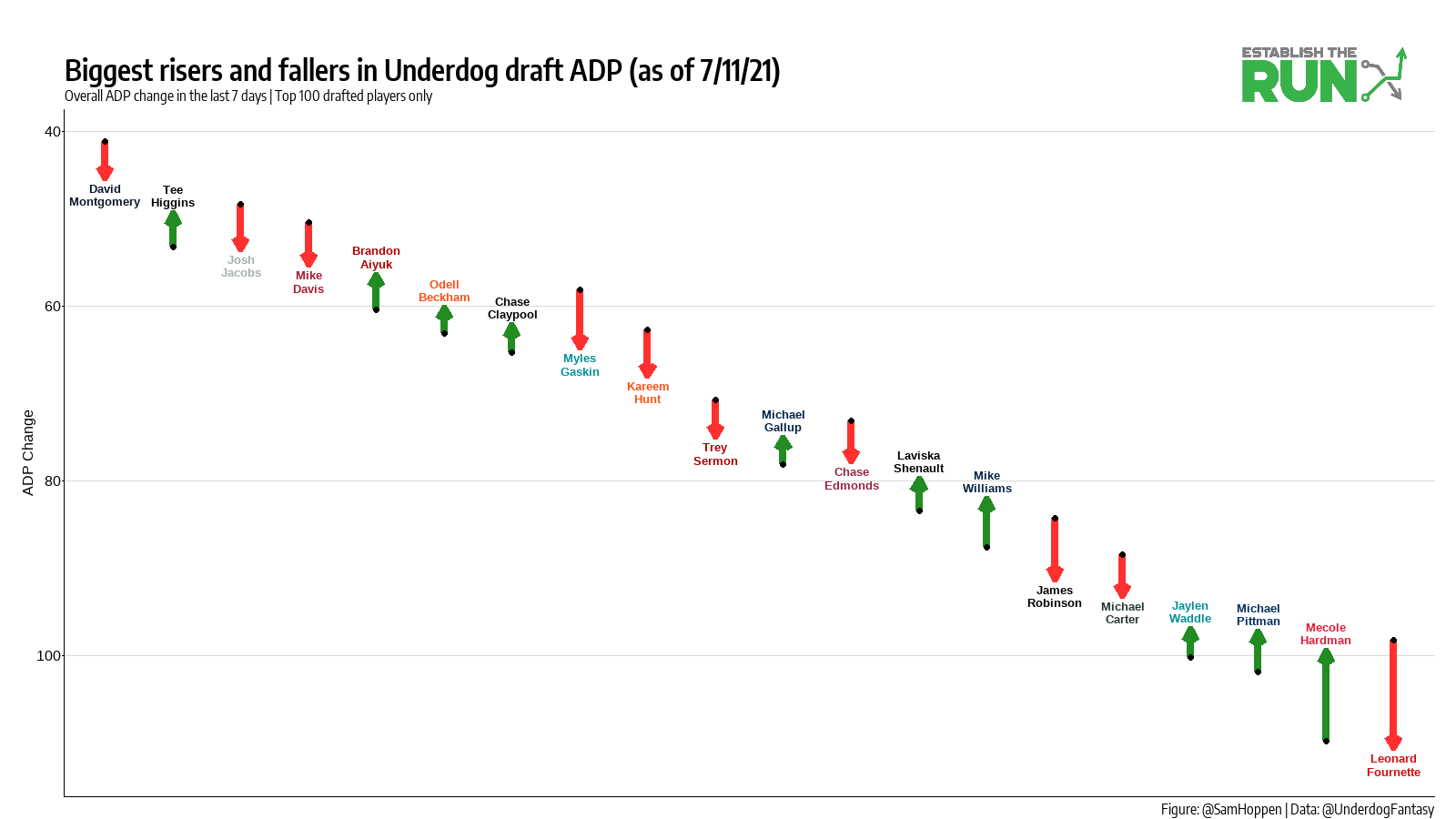 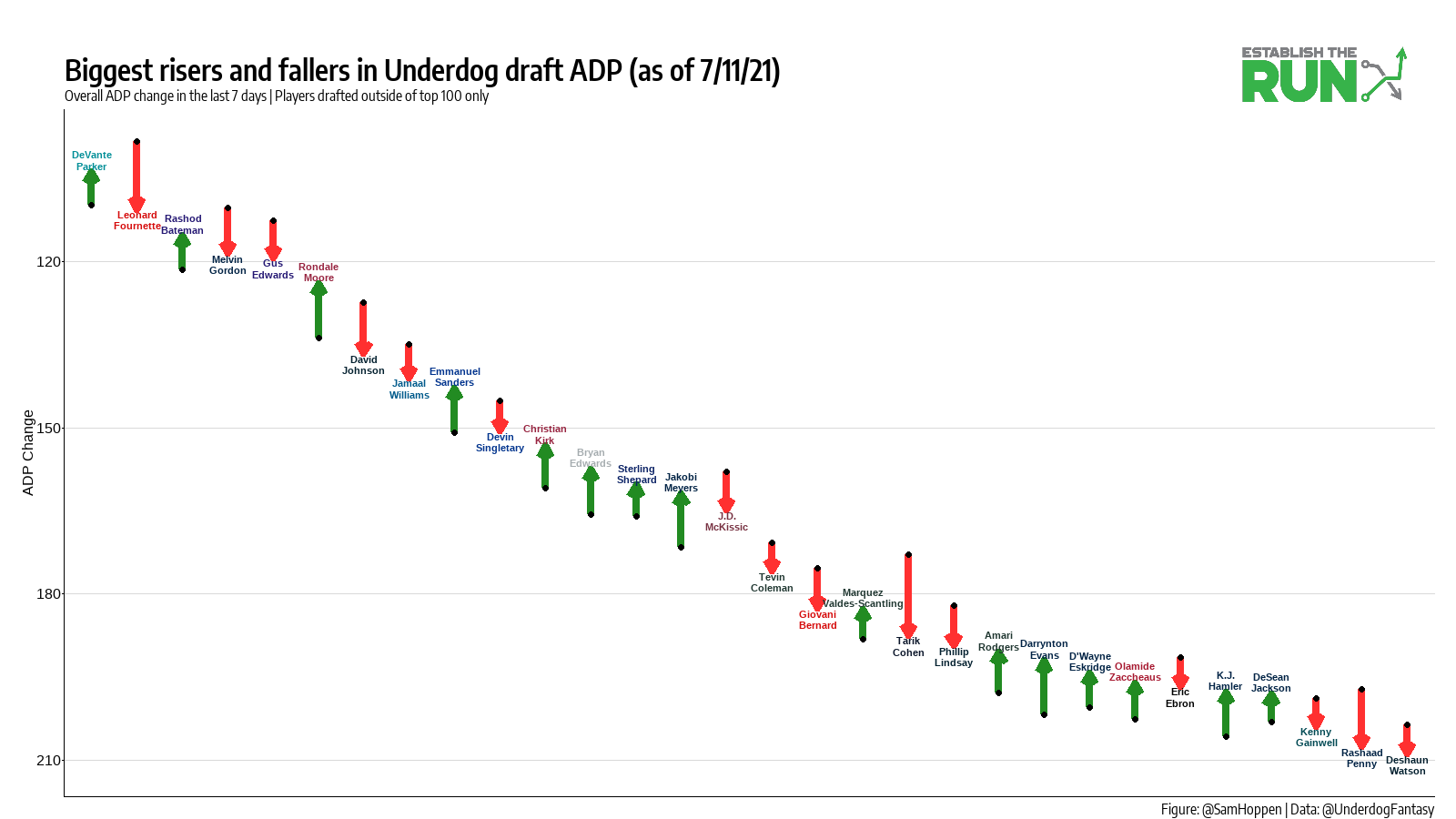 1. For the second straight week, Mike Williams is a big riser across the industry. He had the second-largest increase in ADP on Underdog (82.1 from 87.6), largest increase on NFFC (94.4 from 104.8), and largest increase on FFPC (95.6 from 101.4) among players with a Top-100 ADP. We now have Williams ranked slightly behind his positional ADP on all three sites but ahead of his overall ADP on NFFC and FFPC where the market isn’t as keen on WRs in general.

3. Zack Moss is one of the biggest risers at RB in managed leagues (90.1 from 95.6 on FFPC, 99.3 from 104.3 on NFFC). We now have him ranked correctly positionally (around RB35), but the bump in ADP puts him in a range where RBs are overvalued. Devin Singletary is the better value on FFPC where he’s more than 40 picks after Moss (131.4). This situation is potentially applicable to some fascinating research that J.J. Zachariason has done regarding breakout running backs.

5. Darrynton Evans is the biggest riser on Underdog outside of their Top 100 (up to 192 from 201.8). Evans is a good zero RB flier in the 17th-18th rounds, but as he starts to creep into the 15th-16th, there are likely better options given his reliance on contingent value.

1. A lot of RBs are seeing their ADPs drop on Underdog but none more so than Leonard Fournette (110.5 from 98.2). Our rankings are now ahead of market on Fournette overall (108) and in line positionally (RB37). There’s concern that Fournette’s playoff run is a red herring, as he was almost cut prior to Ronald Jones‘ bout with COVID, and now he has to compete with Giovani Bernard for pass-catching work. With all that said, at the new price Fournette is appealing in Zero RB builds or as a third back in four-RB builds. We shouldn’t completely ignore the playoff run where he averaged over 100 yards from scrimmage and a TD over four games. There’s a decent blend of some week-to-week usability in a timeshare plus some upside if he’s able to recapture his playoff role.

2. Jalen Hurts has seen a big drop in ADP on NFFC (102 from 87.3). My initial instinct was BUY, but after checking our NFFC specific rankings, this drop seems appropriate given the scoring format. Hurts’ rushing edge is muted because NFFC awards 6 points per passing TD, which actually brings passers like Tom Brady, Joe Burrow, and Aaron Rodgers slightly ahead in our rankings there.

3. Baker Mayfield (259.4 from 236) and Carson Wentz (223.3 from 197.8) are the two biggest fallers on FFPC outside the Top 100 and essentially free in the FBG championship. If you don’t get a good value on the second-tier elites, the knowledge that you can get one of these stable assets for free at the end of the drafts allows you to wait and take a swing on upside in the teens rounds with a Trey Lance or Justin Fields. I talked about that strategy HERE. It’s also applicable to NFFC where Tua Tagovailoa (214.7 from 186.8), Joe Burrow (120.1 from 104.5), and Justin Fields (180.4 from 165.7) crack the top fallers list.

Generally, the ADP shifts on Underdog are somewhat muted. However, with the announcement of The Puppy this past week, we’ve seen stark global changes in Underdog ADP. It’s fascinating.

While there’s a temptation to zig while others zag, this does make WR-heavy early teams stronger for two reasons:

For the time being, I *think* this plays well into the hands of the RB strategy I outlined earlier this offseason. It’s now easier to implement both Hyper Hyper Fragile RB teams as well as ZeroRB teams given the dropping ADPs of the position beyond the “dead zone”. However, at some point, three early RB teams may come into play if this ADP shift goes too far and starts materially impacting the workhorse RBs going in Rounds 1-2.

I’m looking forward to entering more drafts this upcoming week to see how this plays out in practice.