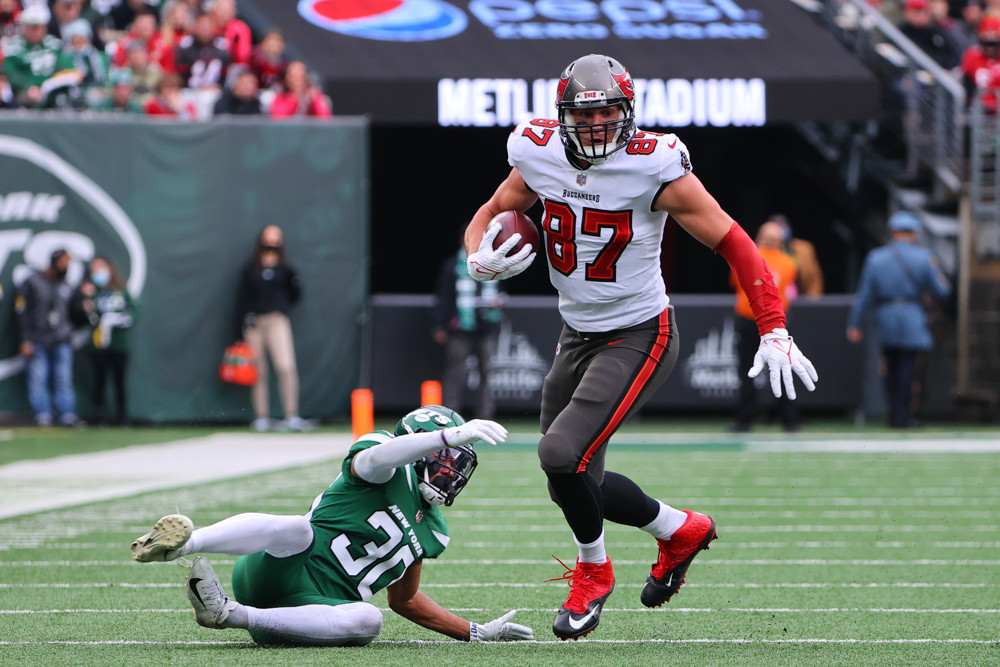 The final week of the NFL season is rife with narratives to utilize for both betting and fantasy football. One of those is trying to figure out what players may be chasing before the season comes to a close — either to receive some kind of financial compensation, or reach a particular milestone. We have compiled for you some of the most important such items to note for Week 18.

NOTE: Our content and projections will bake in what we think actually matters. We have both weekly and monthly options here, and we will be on our normal content schedule through the Super Bowl.

1. Tom Brady needs to be top five in passer rating to earn $562,500 — Brady is currently eighth in passer rating (100.8), but Kirk Cousins (fifth, 101.3) is only slightly ahead of him. A quality performance against the Panthers can get him there, and Bruce Arians has already noted that his team will be playing to get the second seed in the NFC. They can lock that up with a win and a loss by the Rams.

2. Tom Brady needs to be top five in completion percentage OR yards per attempt to earn $562,500 — Brady is currently 13th in each of these categories, and would need a monster effort to hit either benchmark. Fortunately, he does have something to play for.

3. Aaron Rodgers needs to be top three in completion percentage to earn $100,000 — Rodgers is currently fourth here (68.6%), so this is an attainable milestone. The biggest question is how much playing time he gets on Sunday. Both Matt LaFleur and Rodgers have indicated that they will not rest starters. Their game plan could look similar to Buffalo’s last season — where Josh Allen played a half before turning things over to the backup.

4. Aaron Rodgers needs to be top three in yards per attempt to earn $100,000 — Rodgers is currently sixth (7.8), but does not trail Matthew Stafford (third, 8.2) by much. He may not be able to get enough volume to get there.

5. Aaron Rodgers needs to be top three in total touchdown passes to earn $100,000 — Rodgers is currently tied for third with Justin Herbert and Patrick Mahomes. Both of those QBs should play in some capacity this week for playoff objectives, meaning Rodgers is going to need to find the box a couple of times to have a chance here.

6. Stefon Diggs needs six receptions to earn $1.55 million — Diggs is currently at 94 receptions, and receives additions to his base salary over the next two years if he gets to 100. The Bills need a win to lock up the AFC East.

7. Stefon Diggs needs 231 receiving yards to earn $1.55 million — This one is far less likely to happen, but a monster game from Diggs would get him to the 1,375 yards needed to hit another base salary increase.

8. Rob Gronkowski needs seven receptions to earn $500,000 — Gronk is having an epic turn-back-the-clock season, which has him at 48 catches. He needs 55 to obtain this incentive. The Bucs should be playing for the second seed in the NFC, and Gronkowski will be asked to shoulder more of the receiving load with Antonio Brown off the team.

10. Rob Gronkowski needs three touchdowns to earn $500,000 — Gronkowski has scored six times, and sees the incentive money at nine. He has been one of the most prolific red-zone threats throughout his career.

11. A.J. Green needs 75 receiving yards to earn $250,000 — Green can reach the last of his yards-based incentives by getting to 900 on Sunday. The Cardinals will be fighting for a win to have a chance at the NFC West.

12. A.J. Green needs 10 receptions to earn $250,000 — This is a gaudy number for Green, but there are more volume opportunities with DeAndre Hopkins sidelined.

13. Rex Burkhead needs 103 total yards to earn $125,000 — Burkhead has 63 touches over the past three weeks while David Johnson has dealt with a quad injury and two stints on the COVID list. He has played 30 or more snaps in every game since the bye except one. Even if Johnson is ready for action, there’s a good chance the team leans on Burkhead as they look to spoil the Titans’ playoff bye week plans.

14. Rex Burkhead needs 30% of offensive snaps to earn $125,000 — According to PFF, Burkhead has played 33.5% of offensive snaps this season, so he should hit this relatively easily if he doesn’t sustain an injury, but the incentive could keep him on the field even if Johnson returns at full strength.

15. Taylor Heinicke needs a win and 60% of the snaps against the Giants to earn $125,000 — This is a standing incentive in Heinicke’s contract. Ron Rivera has already stated that Heinicke — whose base salary is just $1M — will start on Sunday against the lowly Giants.

16. Marvin Jones needs four receptions for $500,000 — He can also pick up a cool million with a far less likely 14 catches. The Jaguars have nothing to play for other than spoiling a playoff bid for the Colts. With a spread larger than two touchdowns on this game, it is likely the Jags will have to pass.

1. Cooper Kupp needs 12 receptions to break the single-season record — Kupp himself has noted that he feels 17-week records should be separate from 16-week ones, but that doesn’t mean he and the Rams won’t try to get there. They need to win this game against the Niners to keep hold of the NFC West — and the second seed.

3. Tom Brady needs 488 passing yards to break the single-season record — There is quite a bit on the line for Brady (4,990 yards) in this Week 18 matchup with Carolina. It is a long shot for sure, but a monster game from Brady would allow him to pass Peyton Manning as the single-season leader.

4. Mike Evans needs 54 receiving yards for 1,000 in eight straight seasons — Evans became the only player to do this for seven consecutive seasons to start a career last year, and can extend that to eight this week. With so many Bucs chasing milestones, this could be an active passing game.

5. Ja’Marr Chase needs 45 receiving yards for the single-season rookie record — Chase has already passed former LSU teammate Justin Jefferson on the all-time NFL list, but there is one more record to beat — Bill Groman had 1,473 for the (then AFL) Houston Oilers in 1960. The Bengals are a rest candidate if they look to prioritize the health of Joe Burrow over seeding advancement, but they are still live for the bye as of now. A Chiefs win on Saturday would end that dream, but keep the Bengals alive for the second seed in the AFC. Chase is also 12 yards away from the franchise single-season receiving record.

6. Kyle Pitts needs 59 receiving yards for the single-season rookie tight end record — Mike Ditka set this record back in 1961. Pitts is currently dealing with a hamstring injury sustained in Week 17, but with no playoffs in the Falcons’ future, he may gut this out at less than 100% (if that ends up being the case) to get the record.

7. Mark Andrews needs 141 receiving yards for the single-season record as a tight end — Andrews has been red-hot of late, compiling 465 receiving yards in his last four games. The Ravens need a win to stay alive for a Wild Card spot.

8. Jonathan Taylor needs 266 rushing yards for 2,000 — It’s a hefty total, but certainly one that Taylor could hit in a must-win game for the Colts against the terrible Jaguars. With that said, Indy may not want to burn out their star RB before the playoffs. He’s going to need some long plays.

9. Six different QBs are within striking distance of 5,000 yards passing — They are Brady (10), Matt Stafford (352), Justin Herbert (369), Derek Carr (382), Joe Burrow (389), and Patrick Mahomes (431). Brady, Stafford, and Mahomes are already members of the 5,000 club, but the rest would be first-time entrants. Stafford and Herbert are in must-win spots, and Carr will most likely be (though they could clinch before SNF). Brady and Mahomes seem likely to be playing, while Burrow is the biggest question mark.

10. Jaylen Waddle needs three receptions for the single-season rookie record — Waddle has seen outstanding usage in his rookie season, and should continue to be a focal point for Miami as they attempt to keep New England away from a division title.

11. Davante Adams needs 22 receiving yards for the single-season Packer franchise record — The Packers have stated that Adams and Aaron Rodgers will start Sunday’s game though it is unclear just how much playing time they will receive past that.

12. Justin Jefferson needs 124 receiving yards for the single-season Viking franchise record — Minnesota has nothing the play for in this one, so there is definitely some chance Jefferson is force-fed. Even if he isn’t, he already owns a target share north of 30% when Adam Thielen is out.