RBs to Avoid in Best Ball and Dynasty 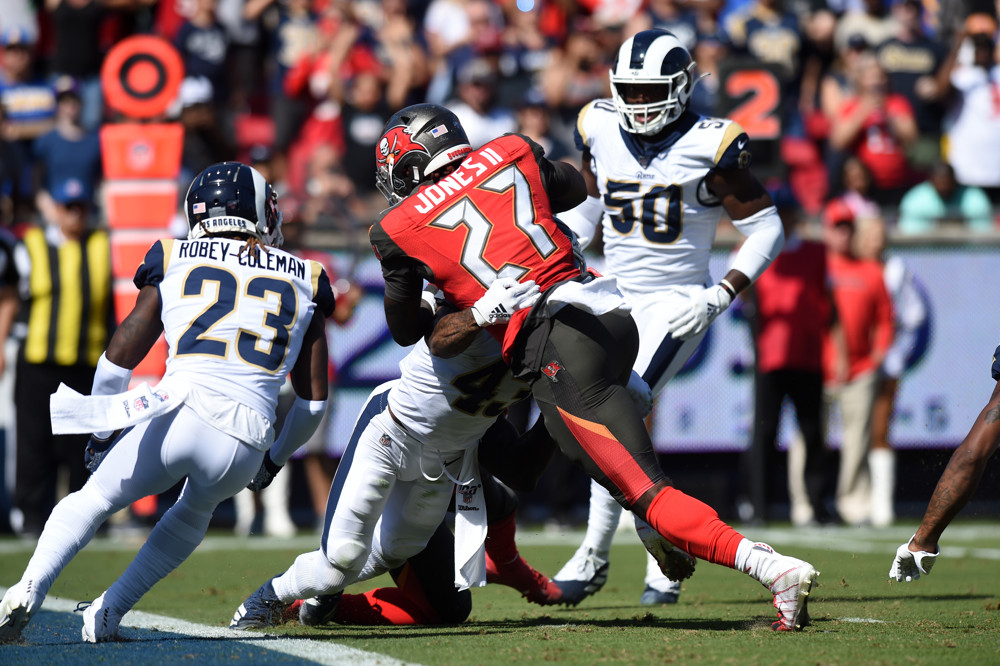 Adam recently covered the players who’ve already lost value in Free Agency, including RBs Phillip Lindsay and Austin Ekeler. But there remain several other RBs that look unlikely to survive the off-season with their current fantasy values intact. Best Ball and Dynasty owners expose themselves to significant downside by ignoring the circumstances around these backs:

1. Ronald Jones, RB, TB
Looking purely at Ronald Jones’ play making ability in 2019 will have have you wondering if he’s an emerging star. For starters, Ron broke 28 tackles on 203 touches in 2019. That’s a broken tackle rate that ranked 4th in the NFL among RBs with 100+ touches. Only Alvin Kamara, Aaron Jones and Damien Williams broke tackles at a higher rate. Joe Mixon — a RB universally regarded as more talented than Jones — required 110 more touches to break the same number of tackles. Jones was also 15th in yards after contact per rushing attempt, besting fellow tackle breaking specialists Kamara and Aaron Jones in the metric.

But he can’t be used in the passing game right? Actually, no. As a receiver, Jones was RB7 in Yards per Route run, besting Christian McCaffrey, Kamara and Aaron Jones among many others.

But there is a problem: Jones can’t pass block. Ron ranked 66 out of 75 qualifying RBs in pass blocking efficiency, allowing a sack, two hits and five hurries in 49 pass blocking snaps. For the record, Dare Ogunbowale and Peyton Barber were almost as bad, and offer far less as receivers. But the Buccaneers clearly don’t trust Jones on passing downs: he saw just 33% of the passing snaps in 2019.

Maddeningly, poor pass blocking wasn’t a limiting factor for some of 2019’s most prolific receiving RBs. Melvin Gordon, Dalvin Cook, Phillip Lindsay, and Leonard Fournette all managed well above Jones’ 40 targets while also being poor pass blockers. They just weren’t asked to do what they weren’t good at — pass blocking on between 6-14% of their pass snaps. Jones however, was asked to protect 22% of the time, making him the RB14 in pass blocking percentage. Let me emphasize that: Even though he was effective as a receiver, but ineffective as a pass blocker, Jones was asked to pass block as much as 3.5x more than other RBs with his passing down skill set.

In fact, all three of Tampa Bay’s RBs ranked top-14 in pass blocking percentage. This was very likely a function of Tampa Bay’s poor offensive line play, and not a feature of the Bruce Arians offense, as Arians hasn’t had multiple RBs blocking on over 20% of their pass snaps since 2012. But the Buccaneers O-Line isn’t expected to be significantly better in 2020, so their RBs may be blocking just as much as ever.

More to the point, it’s unclear how much Jones will be on the field in 2020 at all. Because Jones will have more than just Barber (now in Washington) and Ogunbowale (no guaranteed money) to deal with in 2020. Tom Brady‘s addition to the team has brought with it rumors of veteran signings. And even before signing Brady, it was pretty clear that new RBs would be joining the team. The Buccaneers have met with 11 rookie RBs this off-season, behind only Atlanta in telegraphing their interest in upgrading the position. Additionally, Bruce Arians recently commented on Tampa Bay’s need for a pass catching RB.

2. Devin Singletary, RB, BUF
There’s been steady buzz around the Bills adding a RB this off-season, and the Stefon Diggs trade increased the odds of that coming to fruition.

Diggs and John Brown now form a top 10 WR duo for 2020. And Cole Beasley is a decent third option. However, because Brown and Beasley are both 30 years old, I think we can expect the Bills to target a WR or two in the NFL draft. But that position isn’t nearly the priority that it would have been prior to the Diggs trade. Moreover, the Bills have an extra 5th-rounder and two extra 6ths, so they may opt for a shotgun approach in an exceptionally deep WR class. This approach would more easily allow the Bills to use one of their premium picks on D’Andre Swift, Cam Akers, or Clyde Edwards-Helaire.

Sure, you say. But couldn’t you make this argument about any team with a couple extra late round picks?

I’m not saying that because I think Singletary is untalented. Singletary can play. He proved that down the stretch last season, growing increasingly involved in the passing game and finishing the season as RB5 in broken tackles per touch. But you know who he was right behind? Ronald Jones and Duke Johnson. It takes more than talent to be a good fantasy RB. Your team needs to be willing to commit to you. And remember, Singletary didn’t fully dispatch Frank Gore as the Bills starter until Week 11. The Bills were slow to commit to him in 2019. And he’s being substantially over-drafted if the Bills remain reluctant to commit to him as their clear cut lead back in 2020.

If we look at yards after contact per attempt instead, he passes only Tarik Cohen to move up to RB50. Did Coleman make up for this lack of dynamic ball carrying by contributing in the receiving game? No he did not. Coleman ranked 44th of 57 qualifying RBs in YPRR. And in the 49ers backfield, Coleman ranked 4th behind Matt Breida, Raheem Mostert and Kyle Juszczyk. (This isn’t totally fair since he only had five targets, but Jeff WIlson was better than him too).

This type of multi-phase inefficiency does not tend to endear RBs to their franchises. Phillip Lindsay, another poor performer (RB38 in YAC/Att.) was just replaced as his team’s starter. And RB37 DeAndre Washington, RB44 Todd Gurley, RB45 Peyton Barber, and RB48 Devonta Freeman are all either on, or looking for new teams. I expect this to be the case for RB50 Tevin Coleman before the start of the season.

Here’s what San Francisco has done at RB since 2019 ended:

Coleman’s off-season has essentially consisted of him quietly moving down the 49ers RB priority list, to where he now sits, at the bottom. He likely remains on the roster only as an injury contingency.