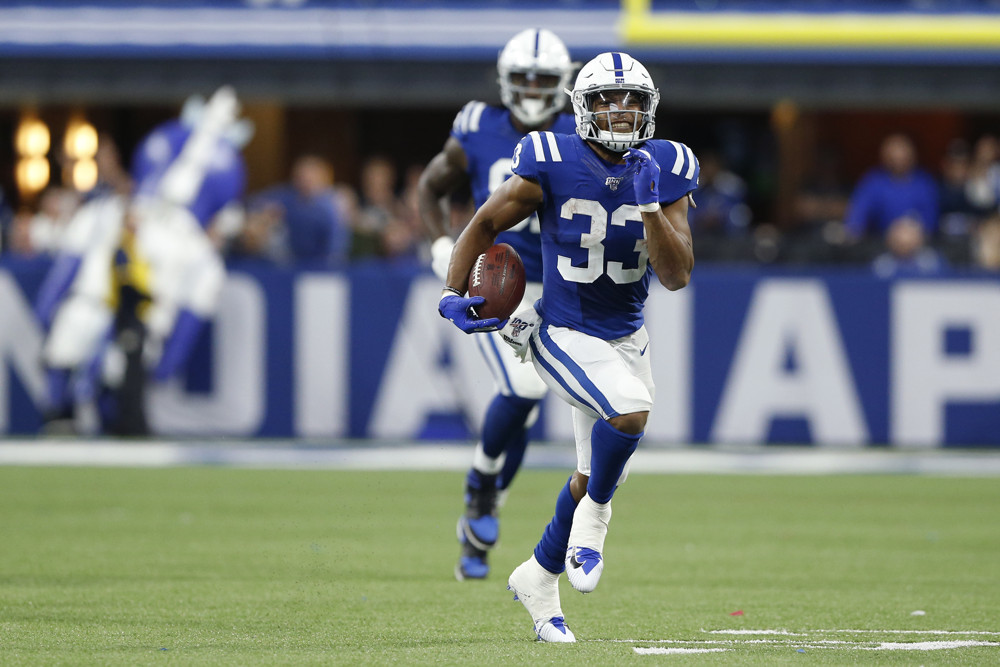 Williams has fully assumed the role of injured backfield mate Marlon Mack. In fact, his 26 carries in Week 12 were the second-most for any Colt running back this season (Mack had 29 Week 5). Against the Texans, Williams usurped 67% of the team rushing attempts, ran a route on 55% of dropbacks, and saw 12% of the team targets. With Mack already announced as out for Week 13, Williams remains a viable play.

Darrell Henderson didn’t see a snap on Monday Night, and Malcolm Brown only played 4%. The Rams offense isn’t what it was a year ago, but we may see Gurley in his old role down the stretch with the team pushing for a playoff birth.

It was Snell rather than Jaylen Samuels carrying the load for the Steelers’ backfield in Week 12 with James Conner sidelined. Snell accounted for 49% of snaps and 55% of the attempts. Samuels was still active in the passing game, running a route on 45% of dropbacks and garnering 11% of targets. It is likely the two backs to split time with Snell handling most of the rushing work until Conner is healthy enough to return.

With backfield mate Carson once again battling through ball security issues (two fumbles) in Week 12, Penny got hot amassing 129 yards on 14 attempts. Over the two previous games Carson accounted for 73% and 74% of the rushing attempts and has accounted for 62% of the team attempts for the season.

Week 12 was the first game this season where Carson didn’t lead the team in attempts. Penny accounted for 54% versus 31% for Carson against the Eagles. The snap counts were close (51% for Carson and 49% for Penny), with Carson running a route on 47% of dropbacks (16% of targets) versus 25% for Penny (4% of targets).

The rookie speedster has seen his routes per dropback rise each of the past three weeks (42%, 67%, and 79%). In Week 12, he led the team with 26% of targets. While Brown was more of a vertical threat early in the season, he is now getting more involved in the short and intermediate passing game. Over the past two games his aDOTs are 11 and 8.5 yards. As long as he remains healthy, Brown appears to be back on track to being a focal point of this big-play passing game along with Mark Andrews down the stretch.

Shepard returned from a five-game absence (concussion) to lead the team in routes per dropback (100%) and targets (25%) in Week 12. Golden Tate has taken over the slot role, and Darius Slayton is remaining on the field with Shepard in two receiver looks. Slayton is the vertical field stretcher leaving Shepard to work underneath and intermediate for more friendly targets. Evan Engram could return to the fold soon, which will make this a crowded situation, but Shepard’s role in his first game back is a positive one.

The Rookie Scouting Portfolio favorite made this list a couple of weeks ago but deserves mentioning again in Week 12. Over the past two games he has led or tied in routes per dropback (92% and 77%) and has commanded 21% and 28% of the team targets. His 24 point (PPR) outburst heading into the fantasy playoffs could be a sign of things to come.

Amazingly, Ryan Tannehill is second to Lamar Jackson when it comes to fantasy points per dropback at .68 (minimum 150 attempts). The Titans’ commitment to the running game (only 51% and 42% dropback rate over last two games) will continue to be a barrier, but Brown is gaining the trust of his new quarterback and could produce similar outbursts over the coming weeks.

After playing 75% of snaps, running a route on 81% of dropbacks, and gobbling up 25% of targets in Week 11, the Bucs’ tight end faded into fantasy oblivion in Week 12. Brate was back to his normal role with O.J. Howard leading the way with 78% of snaps, 61% routes per dropback, and 7% of targets. After a 4% target performance, any ideas of Brate as a potential streamer are over.