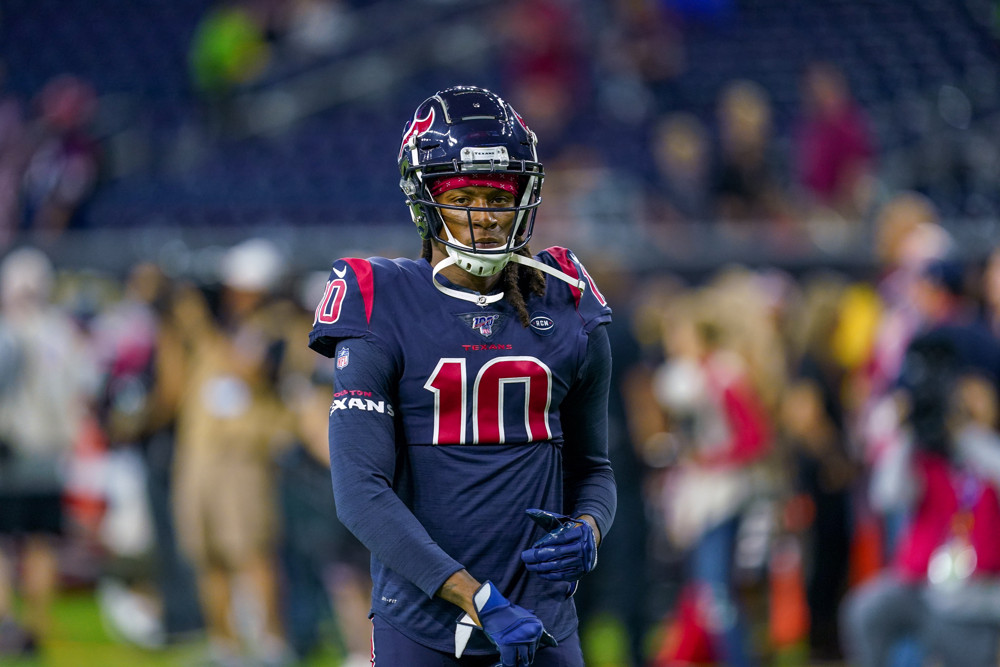 QUARTERBACK
Patrick Mahomes ($7100 DK, $8300 FD) — Chiefs say hand “injury” not a concern as Mahomes has practiced full all week. So finally healthy with all of Tyreek/Watkins/Kelce also ready to rock. Ceiling dinged by matchup, but floor is elite.

Deshaun Watson ($6800 DK, $8200 FD) — Thin slate for standout QB plays. Watson has very plus matchup, huge motivation in game that could decide the AFC South and a built-in floor thanks to rushing equity.

Ryan Tannehill ($6500 DK, $7600 FD) — Of course we expect Tannehill’s mind-blowing 2019 efficiency to regress. But he can sustain it for another week against a Texans defense ranked 27th in yards per play allowed.

Kyler Murray ($5600 DK) — Very cheap on DraftKings as he comes off three straight sub-200 yard passing days. But that was against 49ers, Rams and Steelers. Now Kyler gets a better (although not ideal) matchup against the Browns.

RUNNING BACK
Christian McCaffrey ($10000 DK, $10400 FD) — Played on 70-of-71 snaps last week and all of garbage time even though the Panthers are drawing dead to the playoffs. Averaging 12.0 targets per game over his last four. In cash, his floor is wildly valuable.

Saquon Barkley ($7700 DK, $8300 FD) — True every-down RB has played on 170-of-178 snaps over last three weeks. Production has been pitiful, but Dolphins 30th in yards allowed per game and dead last in points allowed.

Chris Carson ($7500 DK, $7400 FD) — With Rashaad Penny (knee) done, Carson has the backfield to himself again. That means a legit 20-25 touch projection against the league’s worst rush DVOA defense. Far cheaper on Fanduel.

Todd Gurley ($6000 DK) — Rams have recommitted to Gurley as their feature back. Over last four games Gurley has 84 touches, Malcolm Brown has 17 and Darrell Henderson has zero. Gurley’s price sticks out on DraftKings.

Robert Woods ($6200 DK) — The Rams’ new offense features Woods as their no-doubt No. 1 wideout. Whereas the roles of Cooper Kupp and Brandin Cooks are situational, Woods is the every-down workhorse. At least nine targets in four straight. Better play on full-PPR DraftKings, where he’s also relatively cheaper.

AJ Brown ($6200 FD) — Playing time has spiked lately, turning Brown into an every-down player and No. 1 receiver. Still very cheap on Fanduel, but price has spiked drastically on DraftKings.

Dede Westbrook ($4600 DK, $6000 FD) — Westbrook’s slot role won’t change with DJ Chark out, but we do get to spread around 8.1 targets per game. Just note Dede’s average depth of target is just 7.32 yards — sixth-shortest among all WRs in the league.

Chris Conley ($3600 DK, $5100 FD) — With DJ Chark (foot) sidelined, Conley becomes the premier deep threat. Raiders have allowed the NFL’s most pass plays of both 20+ and 40+ yards. Conley is also popping in this week’s Buy Low Model. Keelan Cole, who will step into Chark’s role, is also in play on DraftKings at stone minimum.

Greg Ward ($3000 DK) — Eagles are without Alshon Jeffery (foot) and Nelson Agholor (knee) is unlikely to play. That leaves Ward as the No. 1 wideout, although he’ll take a backseat to Zach Ertz and likely Dallas Goedert on the target totem pole.

Zach Ertz ($6000 DK, $6700 FD) — Carson Wentz is left with no one to throw to other than Ertz. Has seen at least 11 targets in four of last five games, averaging 11.0 during that span. Massive volume for a red-zone threat at these price tags.

DEFENSE
Chiefs ($3500 DK, $3900 FD) — Drew Lock has impressed in two starts, but going to Arrowhead is a different animal. If the Broncos get behind multiple scores, Chiefs pass rush will get home. Price stands out on Fanduel.

Packers ($3000 DK, $4200 FD) — Mitch Trubisky has played much better lately, but still has implosions in his range. Packers DL vs. Bears OL is Thorn’s No. 4 mismatch on the week.

Giants ($2700 DK, $3900 FD) — Ryan Fitzpatrick’s YOLO style is great for his wide receivers and also opposing defenses. He has taken 33 sacks, thrown 12 interceptions and fumbled three times in eight full games and parts of four others.

Lions ($2300 DK, $4100 FD) — Jameis Winston has thrown seven more interceptions than any other NFL QB and has taken the third-most sacks. Cheaper on DraftKings.