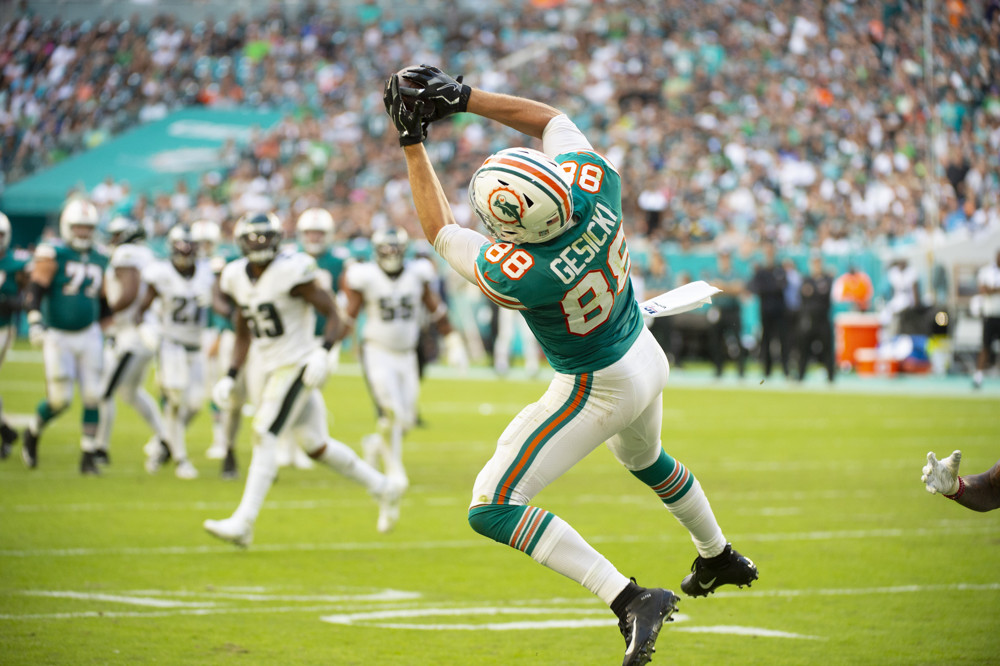 A lot of the offseason “chatter” is irrelevant coachspeak. Statements like “We’re going to use Adrian Peterson in the pass game a lot this year” and “We’re still really high on OJ Howard” serve only to trick our gullible opponents.

However, we can gain an edge by examining teams’ actions. Through transactions, contracts and draft strategy, they let us know what they’re really think. I explored some of this in the wake of free agency with winners and losers.

These are the players who saw a boost in value thanks to what their team did (or didn’t do) in the draft:

1. Dak Prescott, QB, Cowboys
Dallas led the NFL in yards per play last season, was 2nd in offensive DVOA and Dak was fantasy’s QB3 in points per game. This offense has paths to being even better in 2020. Zombie-running Jason Witten has been replaced by exciting sleeper Blake Jarwin, mind-numbing Jason Garrett has been replaced by newly analytically-inclined Mike McCarthy and then CeeDee Lamb happened. One of the classes’ best prospects somehow fell to the Cowboys at 17, giving Dak arguably the NFL’s best 3-WR set in Amari Cooper, Michael Gallup and Lamb. Prescott sets up nicely as fantasy’s No. 3 QB for 2020, behind only Lamar Jackson and Patrick Mahomes.

2. Preston Williams, WR and Mike Gesicki, TE, Dolphins
The Dolphins made 11 picks in the draft and used zero at the wide receiver position. That’s great news for Williams, who immediately opened eyes last offseason despite going undrafted out of Colorado State. He was the star of the offseason program, lit up training camp and eventually won a starting job in the regular season. Williams earned 7.5 targets per game in eight before getting hurt and logged a respectable 1.60 yards per route run. For comparison sake, DK Metcalf was at 1.69 and Marquise Brown 1.81. Williams heads to camp as the starter opposite DeVante Parker.

Gesicki’s lack of physicality gives him problems as an NFL tight end, but the Dolphins aren’t using him as a traditional tight end. Over the final seven games of last season, he played on 76% of the snaps, was slot or wide on 78% of those, averaged 7.4 targets per game and scored five touchdowns. A true athletic freak, that kind of usage is exciting — especially since the Dolphins didn’t add any pass-catchers. Both Gesicki and Preston would benefit from another year of Ryan Fitzpatrick YOLOing all over the field.

3. Miles Sanders, RB and Boston Scott, RB, Eagles
Doug Pederson ditched his strict RBBC tendencies down the stretch last season, largely due to Jordan Howard’s injury. Over the final six games (including playoffs), Sanders averaged 15.6 carries plus 5.3 targets while regularly playing more than 80% of the snaps. The Eagles proceeded to let Howard walk in free agency and selected no running backs in the draft. That leaves Sanders and Scott unthreatened heading into 2020, a great sign that Pederson was fine with a workhorse role for Sanders. Note that Scott saw a strong 5.6 targets per game over the last five as a Sproles-esque backfield option.

4. Allen Lazard, WR and Jace Sternberger, TE, Packers
The Packers tried to excuse their joke of a draft by claiming they going to a run-based, ground-n-pound, defensive style. It’s not a style that’s easy to execute. Aaron Rodgers has been in the top-8 in pass attempts in each of his last three healthy seasons and I’d project that to continue. So who is he throwing to? The Packers only added Devin Funchess via a barely-there deal in free agency and then took zero WRs in the best draft class of all-time. It’s now likely that Lazard, who Rodgers actually likes and caped for last season, will be starting opposite Davante Adams. Note that Lazard’s athletic profile (6’5/227, 4.55 speed, 38-inch vertical) is appetizing.

Meanwhile, 2019 third-round pick Sternberger is also rising in the wake of the draft. Jimmy Graham’s replacement is 35-year-old blocker Marcedes Lewis and Sternberger went 49-837-10 at Texas A&M in 2018. Matt LaFleur claims Sternberger will move around this season and line up in the slot “a lot.” Maybe I’m giving the organization too much credit here, but perhaps part of the reason they passed on everyone in this WR class is because they think Sternberger can emerge.

5. Todd Gurley, RB and Russell Gage, WR and Hayden Hurst, TE, Falcons
The Falcons don’t appear to have many worries about Gurley’s knees. They emerged from the draft with no running backs, leaving the likes of Brian Hill and Qadree Ollison as backups. Meanwhile, the offensive line is looking up with 2019 first-rounders Chris Lindstrom and Kaleb McGary joining Alex Mack and Jake Matthews. While Gurley was coddled early in the 2019 season by the Rams, he did hold up on 19.6 touches per game over the final five. That workload is now in the range of outcomes with Atlanta.

Meanwhile, the Falcons repeatedly passed on opportunities to upgrade their WR3 spot behind Julio Jones and Calvin Ridley. They took Clemson CB AJ Terrell over CeeDee Lamb in Round 1 and then passed on Chase Claypool and Denzel Mims in Round 2. So while Gage is a sub-average NFL wideout, he has the inside track on the slot job. It’s a role that quietly yielded 8.0 targets per game over the final six last season. Hurst’s projected target share is intact – Austin Hooper racked up 7.4 targets per game in this exact role last season.

6. Drew Lock, QB, Broncos
The Broncos already made nice strides with their offense in free agency, adding a viable pass-catching back in Melvin Gordon and one of the league’s best guards in Graham Glasgow. Then John Elway went ham on weapons in the draft. Jerry Jeudy may be the best wideout in the class, KJ Hamler has 4.2 speed and hyper-athletic TE Albert Okwuegbunam brings the #ShowerNarrative into play. Of course, Lock already had an alpha WR in Courtland Sutton and one of the game’s future stars at tight end in Noah Fant. Lock only played in five games as a rookie, but completed 64.1% of his passes and had a spike game (309 pass yards, 3 TDs). He has the supporting cast for a bunch more spike weeks in 2020.

7. Ryquell Armstead, RB, Jaguars
The Jaguars went into the draft trying desperately to trade Leonard Fournette. They couldn’t find a taker, but that doesn’t mean he’ll be with the team once September rolls around. Beat writers have speculated that Fournette could very well just be cut if no trade partner is found. Meanwhile, the Jags had a whopping 12 picks in the draft and didn’t take a running back. It’s at least possible Armstead is the Week 1 lead back, with Devine Ozigbo as the complement.

9. Jarrett Stidham, QB, Patriots – Perhaps Cam Newton eventually joins the Patriots. But for now, Bill Belichick didn’t seem overly interested in snagging Jordan Love, Jalen Hurts or any other QB in the class. Stidham was excellent in the 2019 preseason, completing 67.8% of his passes for 8.1 yards per attempts and four TDs.

10. Sam Darnold, QB, Jets – Losing Robby Anderson hurts, but the Jets added one of free agency’s most underrated wideouts in Breshad Perriman. In the draft, they gave Darnold a building block OT in Mekhi Becton and Chris Godwin-like WR Denzel Mims. A full season of Chris Herndon helps as well.

11. N’Keal Harry, WR, Patriots – Zero WRs in the draft for the Patriots even though Julian Edelman is turning 34 years old. Big second-year breakout chance for Harry, the 2019 1st-rounder who never got on same page with Tom Brady and finished with just 12 catches last season.