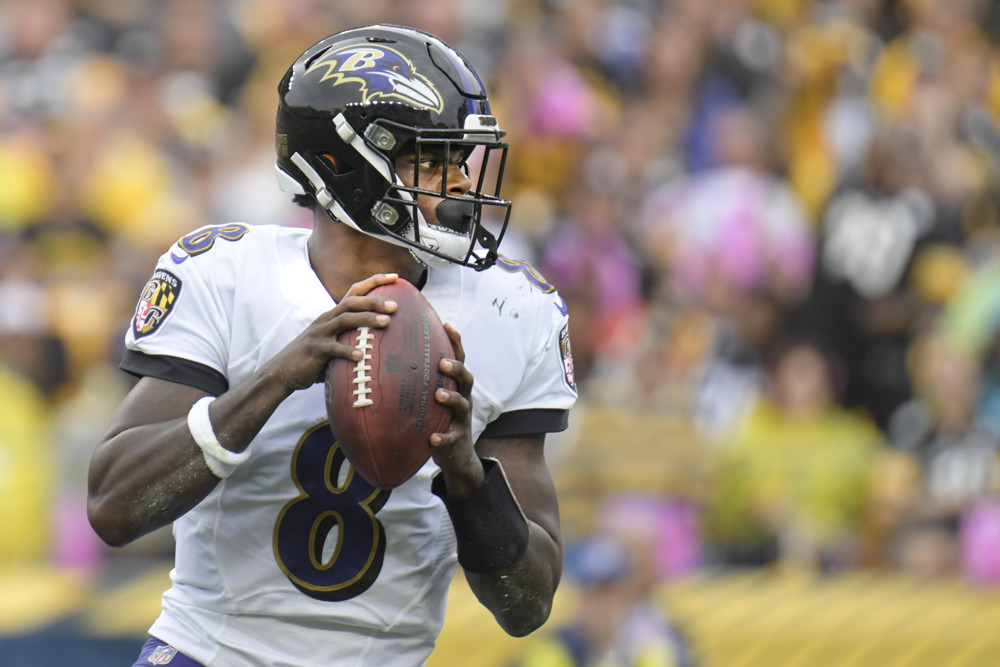 Coach of the Year: https://establishtherun.com/reynolds-coach-of-the-year-market/

Comeback Player of the Year: https://establishtherun.com/reynolds-comeback-player-of-the-year-market/

The foundation for a Lamar MVP bet is built on already knowing he’s capable of MVP-caliber production, that the Ravens are a reliable team that is expected to contend for the top spot in the AFC, and that Jackson is entering this season with the best group of pass catchers he’s ever had. Similar sales pitches could be made for all of the top contenders for this award, which is why the Ravens’ early schedule is the driving force behind my Lamar bet.  The Ravens start the season in Las Vegas on Monday Night Football where Jackson will be in excellent position to hang 30-plus points against the Raiders in front of a national audience. After that the Ravens host the Chiefs in Week 2’s installment of Sunday Night Football. If the Ravens take care of business against the Raiders and Lamar then plays well in a winning effort against Kansas City, in front of another national audience, he will take the early lead in the MVP race.

Long-term Dallas has a soft schedule (third easiest) and we know that Dak is capable of elite production behind the Cowboys’ ultra-talented offensive roster. I also like that consensus seems to be low on Dallas in terms of their ability to significantly exceed their 9.5 win total. Fading the herd when there is a logical path to doing so is something that I always consider in sports betting. On the downside, drawing the season opener in Tampa is going to be an uphill battle for Dallas, especially when factoring in that Dak could realistically be rusty, even uncomfortable coming off a gruesome ankle injury that ended his 2020 campaign. The Cowboys’ opening night matchup in Tampa is why I’ve only bet half a unit on Dak to this point, where I intend to complete that wager either heading into Week 2’s road trip to the Chargers or before Week 3’s Monday Night home opener against the rival Eagles.

The thought process in making this bet is that it was a +EV wager, as a former MVP winner on a talented offense should be no higher than 50:1. The departure of Julio Jones certainly doesn’t help this position, but the more difficult path to this bet hitting was always the Falcons’ ability to be a contending team.

Rookies do not often win the MVP award in professional sports, but the potential opening day starter for a 49ers team with a 10.5-game win total should not be available at 300:1 odds. I put half of a unit on this when I first saw it, and then another half unit when the schedule came out as the 49ers open in Detroit against the Lions. If Lance begins the season as the starter in Detroit, this could end up being a pretty fun position to have. Lastly, Lance is a roughly 100:1 MVP bet at most books; as of this writing MGM still had him listed as a 300:1 longshot.

Offensive Rookie of the Year

I bet this soon after post-draft odds were listed due to the phenomenal supporting cast Lance will have in San Francisco. If Lance ends up being the opening day starter, I expect that he and Jaguars quarterback Trevor Lawrence will be nearly co-favorites in the Offensive Rookie of the Year race to start the season. Apart from that, OROY has so many legitimate contenders this year (eight players have sub 10:1 odds in this race right now), I may not bet on this particular race again this year and would not actively recommend anyone given the deep field.

Defensive Rookie of the Year

I watch very little live college football, so when I watch college prospects heading into the draft there are players I had little to no knowledge of that completely blow me away. Owusu-Koramoah’s versatile skill set and relentless effort made him one of my favorite players heading into the 2021 draft. A rumored heart issue (which apparently is not actually an issue at all) led to JOK sliding into the second round, where he landed in a great spot with the Browns. First, a bet on JOK was a +EV bet for me as he was the second DROY favorite only behind Micah Parsons before the draft. Once I saw that the heart issue that caused his draft slide was not actually an issue, I saw the disparity between the pre-draft odds as an opportunity. Further, this rookie class lacks the top-of-the-draft elite pass rusher that often wins this award, making this a far more open race than it is in most years. While betting on a linebacker is an outlier bet for this award, in this race anyone that wins is going to be an unconventional winner.

Defensive Player of the Year

I’m less than crazy about the odds, but Garrett is arguably the league’s best edge rusher and he was right in the thick of the Defensive Player of the Year race last season before he got hit with COVID. On top of that, the Browns have an excellent roster while adding significant talent to their defense this offseason, which is among the reasons Cleveland is among the true contenders in the AFC this year. Since team success is a factor in the Defensive Player of the Year race, an elite pass rushing talent like Garrett is in a great position to take down this award as the centerpiece of Cleveland’s defense.

Coach of the Year

The idea here is that the NFC East is a wide-open race; all of these teams were under .500 last year, which means that all of them can realistically beat last season’s record by four or more games (which is something most Coach of the Year winners do), they all have longshot level odds, and Dallas is the only NFC East team projected to be over .500. Whoever wins this division is in a strong position to exceed expectations enough to warrant consideration for this award. Cardinals coach Kliff Kingsbury and awards voters breaking their general pattern are my biggest concerns for this unconventional play not landing, as most of the current favorites in the Coach of the Year race would need to be an untraditional winner to take down this award.

Comeback Player of the Year

Given Dak’s visually gruesome ankle injury last season, paired with his elite supporting cast on offense, it’s going to be very hard for anyone to overcome Dak in this race unless the Cowboys’ signal caller misses time. I also think there is some chance that if Dak wins the MVP, someone else wins Comeback Player of the Year.

I put a small bet on Winston at these odds because he has already shown that he can put up big numbers, the Saints are projected to be a competitive team with a nine-game win total, and New Orleans coach Sean Payton has gotten the most out of the imperfect Taysom Hill and Teddy Bridgewater in each of the last two years.  While there is definitely some concern that Hill sees significant time even if Winston wins the starting job, Jameis has the best shot of approaching favorite Dak Prescott‘s production while leading a competitive team versus the other quarterbacks in contention for this award. That’s also why Winston should be in the 20:1 range.

I was considering a Broncos over bet due to their talented group of pass catchers, high-end secondary, and their potential to have a topflight edge rush. When the news broke that Aaron Rodgers was now beyond disgruntled in Green Bay, I immediately viewed Denver as the most likely destination if Rodgers was traded and that’s when I made both of these wagers. While the Super Bowl bet will be dead if the Broncos do not acquire Rodgers or Deshaun Watson, I still think the win total bet would have a good chance of cashing.

In most years I have a clear favorite over and a clear favorite under that I hit within a few days of the schedule release. In most cases, my favorite over comes with a Coach of the Year bet (the Steelers and Mike Tomlin last year) and my favorite under comes with a First Coach to be Fired wager (the Jets and Adam Gase last year).  That isn’t the case this year, as Raiders honcho Jon Gruden‘s contract makes it virtually impossible to fire him and the Raiders actually got better on defense this offseason. I also tend to have a much larger differential between a win total I bet on and my projection for that team than I do with anyone this year.

With that said, the Raiders meet a number of conditions that I look for in my under considerations. First is that I thought the Raiders overachieved last year, as they won games against the superior Saints, Chiefs, and Browns on the way to an 8-8 record. Second, despite the defensive improvements, the Raiders did not have a great offseason as they dismantled their offensive line which was arguably the strength of their team. Perhaps most importantly, the Raiders have a low-ceiling roster that could very realistically go 0-4 to start the year vs BAL, at PIT, vs MIA, at LAC. I prefer to pair that tough opening schedule stretch with a coach on the hot seat, but days after the draft there were several “heads may roll” rumors regarding ownership’s displeasure with the team’s draft/ offseason. So, while Gruden is safe, there is a notable amount of unease within the organization, and that’s part of what I want to bet against when looking at unders. Further, there is not a single game on the schedule that looks like an easy win for Vegas.

Other Considerations: Panthers under, Texans under, Seahawks over, Browns over, Washington over.