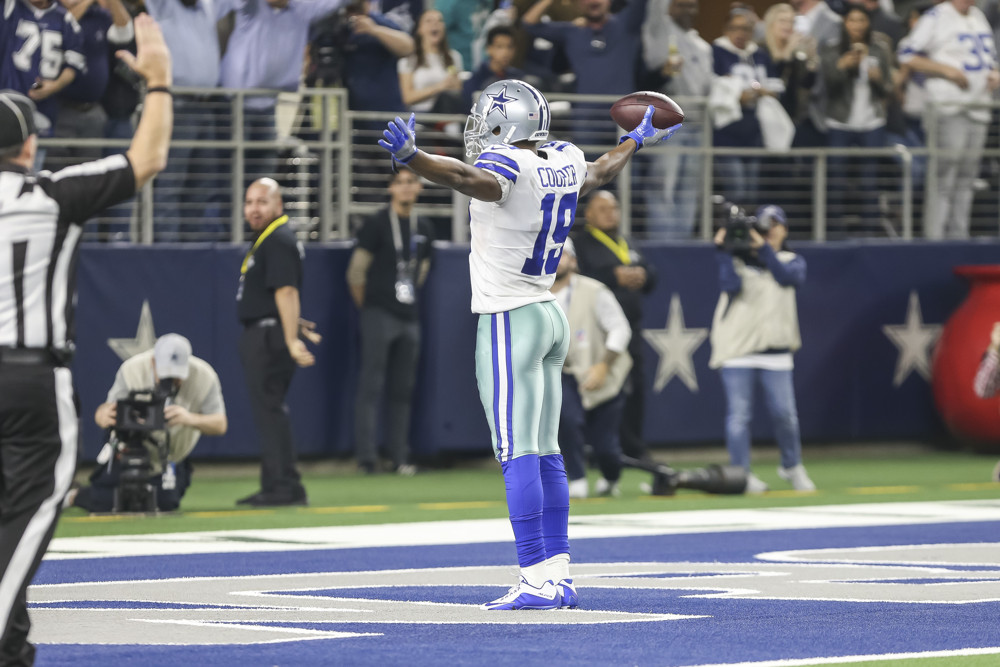 Editor’s Note: Our Draft Kit is just $34.99 and comes with a $25 coupon to use on any FFPC league — a net cost to you of $9.99 after coupon. It includes Evan Silva’s Top 150, his tiers, continuously updated rankings for 11 different formats, analysis from Adam Levitan, and tons more. Click here for details.

Here is a visual of the draft board:

I’ll break down each of our team’s picks within the context of this draft. The article will update as we make our picks.

Most of our team preferred Derrick Henry over Mixon, but Henry went one spot ahead of us. Mixon maintains more passing-game equity and totaled nearly 3,000 yards and 17 TDs in abysmal offensive environments over the past two years. The Bengals’ Joe Burrow-quarterbacked offense has a chance to be a lot better with Jonah Williams, A.J. Green, and John Ross healthy in Zac Taylor’s second year.

I’ve seen a great many FFPC boards with Kittle going early- to mid-first round. We were all surprised and elated he lasted here, especially in the FFPC’s tight end-premium format. (The position receives 1.5 points per reception.) Kittle appears poised for a career year following Deebo Samuel’s Jones fracture. We have Kittle ranked ninth overall in our FFPC Rankings. We’ve also beaten the drum for building Kittle-Jimmy Garoppolo stacks on the Establish The Run podcast, and I now hope to land Jimmy G in the later rounds.

Our third straight pick that lacked much internal debate. With Paeno leading the charge, we were happy to catch a falling Ertz near the end of round three. Ertz was downgraded in some circles based on Philly’s offseason wideout additions, but DeSean Jackson is in hot water, while legitimate pre-season practice time for rookie Jalen Reagor looks increasingly unlikely. Ertz will be Carson Wentz’s alpha target again. Ertz will open the season as our No. 1 flex starter in FFPC’s two-flex format.

After a low-owned RB-TE-TE start – “low owned” being notable since we’re trying to differentiate in a large-field tournament – we make Cooper our WR1 and plan to eventually stack him with Dak Prescott. Cooper was a no-brainer pick for us as this draft’s WR14. At Establish The Run, Amari is our overall WR6.

Between picks, Noonan, Paeno, Allen, and I meandered into a Tyler Lockett–D.K. Metcalf debate in our text message thread. Selected at the fourth-/fifth-round turn, Lockett was never realistically available to us. But Paeno’s passionate plea for Metcalf – he refers to D.K. as “The Next Julio Jones” – became very relevant when Metcalf fell to us toward the end of round five. On the Establish The Run podcast, Adam Levitan and I have repeatedly weighed the probability Metcalf passes Lockett as Russell Wilson’s “No. 1” in year two.

Noonan pushes for Dak Prescott to complete our Cooper stack, but we decide passing on Hilton for any non-Patrick Mahomes or Lamar Jackson quarterback is unjustifiable. Thus, T.Y. becomes our WR3 behind Amari and D.K. and our No. 2 flex behind Ertz. (We start two wideouts and two flexes in FFPC.)

We want Prescott but are sniped at 7.10. Noonan audibly tilts; he wanted Dak the round before. We reverse our sights to a Metcalf-Russell Wilson stack but believe we can land Russ at 8.02. As we’ve drafted just one running back to this point – fully embracing Modified Zero RB, a concept about which you can read more here – it’s time to begin taking shots on RB2 candidates. Following Raheem Mostert’s trade request, Coleman is our optimal pick here.

We guess right, fading the turn picks to complete our Seahawks passing-game stack. Even in Seattle’s run-first attack, Wilson is a high-floor, high-upside play each week and caught one of the NFL’s softest early-season quarterback schedules. Our bet is Wilson and Metcalf will further their year-two connection together.

It’s time to get serious about taking RB2 shots. We heatedly debate our ninth- and tenth-round picks; some pull for Darrell Henderson to be among our 9.11/10.02 selections. We are all enamored with Henderson, but ultimately prioritize Mack and Kerryon Johnson and hope Henderson slips to our next pick based on ADP. (Mack and Johnson are considerably higher than Henderson in FFPC ADP, which is available in our Draft Kit here.) A year of reduced or even nonexistent practice time is likely to work against rookie Jonathan Taylor and to the benefit of established-veteran Mack, who finished top ten in rushing yards per game in 2019.

We draw dead as Henderson goes at 10.6 and Moss at 11.05. We reverse course to address our tight end depth, settling on Smith behind Kittle and Ertz. In tight end-premium scoring, Smith has a real shot to become a viable flex play on a Vikings team very likely to throw more even after trading Stefon Diggs.

Harris becomes our RB5 behind Joe Mixon, Tevin Coleman, Marlon Mack, and Kerryon Johnson. I personally argued for Harris at 11.11 and was pleased he lasted here. The upside of New England’s offense got an injection when they signed Cam Newton, and I don’t trust Sony Michel to hold up.

Although we debated both remaining first-team Panthers wideouts and Carlos Hyde, this pick was ultimately made agreeably. Our RB6, Freeman recently changed agents and will hopefully find quick work once he settles on new representation. It’s believed Freeman has to this point been unwilling to accept minimum-salary offers. Our next hope is that Freeman finds a favorable fantasy environment; we’d love a landing spot like Philadelphia, Tampa Bay, or San Francisco for a Kyle Shanahan reunion.

Some factions pulled for Robby Anderson here, but Samuel won out in a majority vote. Our theory is that Anderson will take on many of the clear-out duties Samuel was forced into last season due to Carolina’s otherwise lack of vertical threats. As Anderson is one of the top field stretchers in the game, his addition should free up Samuel for higher-percentage touches. And we don’t love Anderson’s stylistic fit with low-aDOT passer Teddy Bridgewater.

News broke of Kelvin Harmon‘s ACL tear just as we went on the 15th-round clock, making Sims’ selection all but elementary. (I would have been fine with Sims here even without Harmon’s injury.) Terry McLaurin is certain to draw major defensive attention, guaranteeing Sims quality slot matchups all season long. Especially on an essentially tight end-less Washington team, Sims projects as Dwayne Haskins‘ underneath safety valve after averaging five catches per game over last season’s final month.

We envision Hurd as a high-upside late-round dart throw with an exceptionally diverse skill set, capable of chipping in as a goal-line back and potentially earning San Francisco’s slot receiver job. Dominant last preseason before suffering a debilitating back injury from which he’s now recovered, Hurd’s outlook was enhanced by Deebo Samuel‘s Jones fracture following Emmanuel Sanders and Matt Breida‘s offseason departures. The 49ers have even dabbled with the idea of lining up Hurd at tight end.

We’re not necessarily bullish on the Colts’ defense in real life, but we love their early-season schedule and plan to “stream” them for at least the first month and a half. (And their acquisition of DeForest Buckner can’t hurt.) Indy draws the Jaguars, Vikings, Jets, Bears, Browns, and Bengals in Weeks 1-6, and we will likely drop them for a different D/ST ahead of the Colts’ Week 7 bye.

We complete our 49ers stack by matching Jimmy G with Kittle, Coleman, and Hurd. Garoppolo is among my favorite QB2 picks after the Niners drew one of the league’s fantasy-friendliest quarterback starts to the season. They host Arizona in Week 1, visit the pass-funnel Jets and Giants in Weeks 2-3, then return for three straight home games against the Eagles, Dolphins, and Rams.

Because it’s the last round, and why not? There have been rumblings of Gordon receiving another shot in 2020.