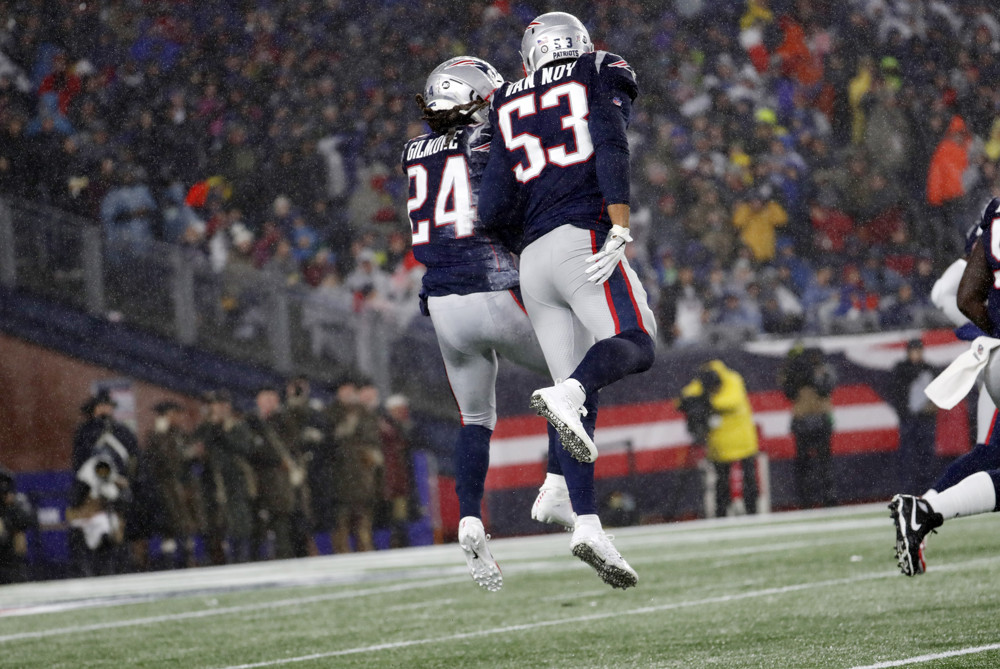 With that in mind, below you’ll find the biggest mismatches between defensive and offensive lines for Week 15. The objective is to project QB pressure through film study, injuries, scheme, coaching and talent.

The Bengals OL continues to be one of the two or three worst units in the NFL despite a slight uptick in performance from the return of LT Cordy Glenn in Week 12. The offense has utilized more empty protections since Glenn’s return with middling success and now have to take on the best defense in the league that ranks 7th in blitz percentage.

The Patriots have one of the league’s best secondaries and a pass rush that is unpredictable with no great but several capable rushers coming from all sides (5 players have 20+ pressures).

Adam Butler does a great job as the catalyst for the interior rush with his ability to find creases that set up loopers and stunts behind him, something that will put an enormous amount of stress on rookie LG Michael Jordan and the interior of the Bengals OL as a whole. With stellar coverage on the backend and a dynamic blitz package with crafty rushers across the board, the Bengals will have to scheme and play the game of their lives to prevent chaos from ensuing up front.

In what will likely be a low-scoring defensive battle, the Steelers have a trio of significant mismatches in the trenches that they will be able to take advantage of on obvious passing downs.

T.J. Watt is in the running for defensive player of the year and will get to take on rookie RT Cody Ford while Cameron Heyward and Javon Hargrave get to take on an interior OL that are much better run than pass-blockers. Hargrave in particular has been on a tear as of late and will have the upperhand vs. Jon Feliciano when isolated against him on passing downs.

The Steelers have had a cake schedule this season and the Bills present their toughest test since Week 5 vs. the Ravens, but having an elite defense with the home crowd on their side will help put a tremendous amount of stress on QB Josh Allen and this OL.

Look for the Bills right side of their OL to struggle having to deal with Watt and Hargrave with Quinton Spain being severely overmatched in pass-protection vs. Heyward.

Philadelphia has had an injury-riddled season but maintains one of the better defensive lines in the NFL led by one of the few truly ‘elite’ 3-techniques in Fletcher Cox. Cox primarily will line up over the RG and faces one of the best in Brandon Scherff this week, but slides further inside over the center in 3-down looks and has a huge mismatch against Roullier.

Cox’s presence will also take away Washington’s best offensive lineman in Scherff, allowing guys like Brandon Graham, Josh Sweat, and Vinny Curry to face lesser players 1-on-1, matchups each should be able to exploit.

This is a bad Redskins offense that will likely be forced into being one-dimensional due to their inability to run the football, putting the burden to produce yards and points squarely on rookie QB Dwayne Haskins and this OL. Expect him to be under fire for most of the day with very little room to maneuver in the pocket.

The Bears have won three games in a row with an OL that has gradually improved over the second half of the season but two of their last three games came at home and against bottom-tiered pass-rush groups (NYG/DET) along with a semi-impressive win against a Jekyll and Hyde Cowboys team.

This Packers front four is a ferocious group that gets a high amount of pressure without blitzing (27th in blitz percentage) and will be at home with a couple lopsided matchups to capitalize on beginning with Kenny Clark on the inside. Clark has bullied Cody Whitehair over the last few years due to his strength and power advantage so with him being able to push the interior of the pocket it will open up lanes and room for Za’Darius and Preston Smith to operate.

The right side of the Bears OL has two backups playing and while they’ve managed to scheme around them and stay afloat, this is the sort of game where they can get exposed. Clark and the Smith’s can pick the side they want to rush from and find a matchup that falls in their favor, making this an obvious inclusion on this list.

The 49ers are banged up on the defensive line after losing NT D.J. Jones and DE Dee Ford for the foreseeable future but still have the likely defensive rookie of the year Nick Bosa with DeForest Buckner and Arik Armstead to form a top-notch trio. Atlanta has been extremely banged up on their OL all season and hasn’t had both starting guards since Week 12 and it doesn’t look likely that it will happen this week due to James Carpenter’s concussion.

Buckner and Armstead will be able to move around the interior and have advantageous matchups against each guard while Bosa has the upper-hand against both LT Jake Matthews and to a greater degree vs. RT Kaleb McGary.

Not having Richard Sherman in the lineup can make it easier to get rid of the ball quickly for QB Matt Ryan but even with a hobbled defense Atlanta throws the ball more than any team in the NFL and will provide Bosa and this pass-rush plenty of opportunity to capitalize on a below-average Falcons’ offensive line.