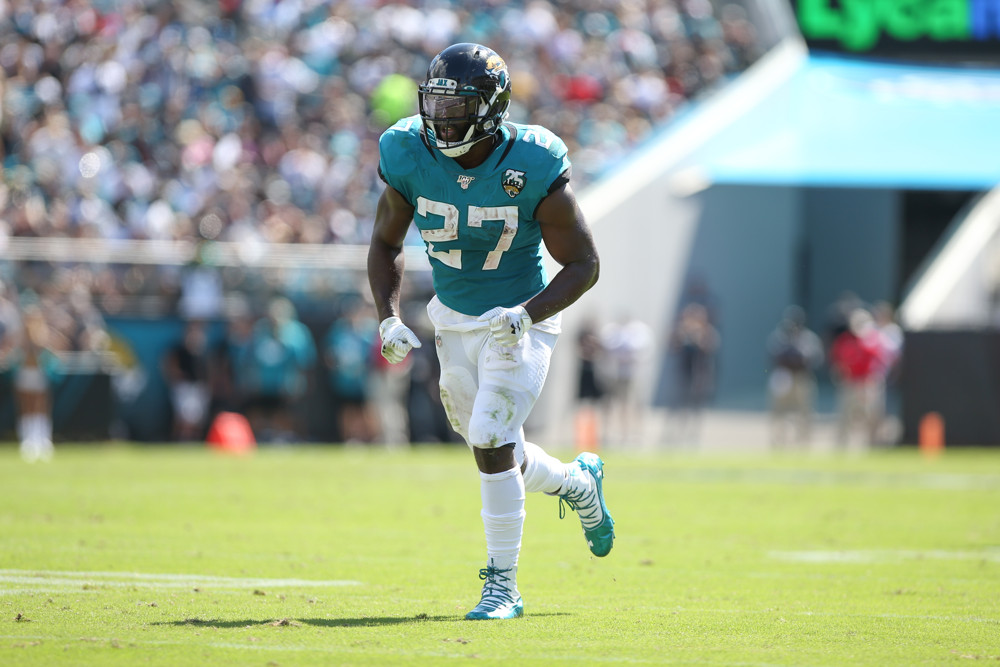 As Jacksonville returns home after consecutive blowout away-game losses and Tampa Bay stays on the road following its upset win at Atlanta, the Jaguars look bounce-back positioned, while the Bucs seem destined for a letdown spot. Still top five in sacks (34) and No. 6 in QB hits (74), the Jags’ D/ST belongs firmly on streamer radars against Jameis Winston, who has thrown multiple interceptions in five of his last six starts and committed nineteen turnovers during that span, “good” for an average of over three per game. Per Sports Info Solutions, Jacksonville has generated pressure at the NFL’s second-highest rate (43.3%) over the last five weeks. Winston’s 8.6% interception rate when pressured is highest in the league. … At the same time, Winston remains playable in season-long leagues with top-ten scores in four of his last five starts amid the turnover blitz. This game has high-scoring, back-and-forth potential. … Particularly after he reemerged as Tampa Bay’s backfield touches (15) and snaps (50%) leader in last week’s win over the Falcons, this game offers Ronald Jones true blowup potential against a Jags defense that’s hemorrhaged 200-plus rushing yards in three straight games, including a combined rushing line of 80/589/5 (7.36 YPC!) to Texans, Colts, and Titans backs. Jones’ floor is low because he’ll lose playing time to Dare Ogunbowale and/or Peyton Barber if Tampa Bay falls behind, but his matchup-driven RB1 ceiling can’t be denied. Set up to finish fast, Jones’ rest-of-season fantasy schedule is outstanding at the Jaguars, at home versus the Colts, at the Lions, and hosting the J.J. Watt-less Texans in Weeks 13-16.

Winston’s 2019 target distribution: Mike Evans 105; Chris Godwin 97; Cameron Brate 36; Ogunbowale 33; Breshad Perriman 32; O.J. Howard 28; Jones 26; Scott Miller 23; Barber 16. … Evans drew eight or more targets for the fifth time in Tampa Bay’s last six games in Week 12’s convincing win over Atlanta but got squeezed by Godwin’s monster day and Winston’s 28 attempts, well below his season average of 40.6. Evans (6’5/231) is a bet-on-talent bounce-back play against lightweight Jaguars perimeter CBs A.J. Bouye (6’0/186) and Tre Herndon (5’11/186). Bouye in particular got roughhoused for repeated big plays by A.J. Brown (6’0/226) last week. … The Jags haven’t shown noticeable slot receiver leaks this year, but Godwin is long past earning matchup-agnostic WR1 treatment with 70-plus yards and/or a touchdown in 8-of-11 games. Godwin leads the NFL in touchdown catches (9) and is on pace for 1,559 yards. … Benched in Week 11, Howard regained his lead tight end role against the Falcons but managed two targets on 78% of the snaps. Brate ran nine pass routes, his third fewest all year. As neither tight end is consistently involved in the Bucs’ passing offense, this has become a fantasy situation to avoid. … Perriman and Miller are officially sharing Bucs third-receiver duties. Each drew one target in Week 12.

While it may feel uncomfortable based on Nick Foles’ recent on-field play, this is a spot to invest in Jacksonville’s passing offense in Foles’ first home-game start since he got injured in Week 1. Tampa Bay has allowed 27-plus points in 9-of-11 games and buoyed quarterback floors by yielding top-15 fantasy results to nine straight signal callers faced. Opponents are well aware of the Bucs’ secondary leaks; no team in the NFL in facing more pass attempts per game (41.9). Foles hasn’t been all that bad in fantasy, anyway, with QB12 and QB15 results in two starts since returning from I.R. Foles is an upside streamer with legitimate DFS-tournament appeal. … While Tampa Bay reinforced its run-defense strength in last week’s win over the Falcons, Leonard Fournette reinforced his own matchup-proof scoring ability against Tennessee with his fourth straight game of five or more catches and topped 110 yards from scrimmage for the sixth time in his last eight tries. On pace for 82 receptions, Fournette is a confidently-elite RB1 play with a high floor and ceiling due to his long-run ability and consistent every-down usage.

Foles’ 2019 target distribution: D.J. Chark 23; Fournette 21; Chris Conley 19; Dede Westbrook 15; Keelan Cole 7; Nick O’Leary 4. … Fourth in the NFL in Air Yards in Foles’ two starts (274), Week 13’s matchup places Chark in an ideal environment facing a Bucs defense yielding the NFL’s most fantasy points to receivers. There aren’t five wideouts on Sunday’s slate with higher ceilings than Chark based on opportunity and matchup. … Right behind Chark, Conley ranks fifth in the NFL in Air Yards over the past two weeks and makes for a similarly attractive yet far-more-affordable DFS play in an optimal matchup on optimal opportunity. Fellow outside WRs Calvin Ridley (6/85/1), Christian Kirk (6/138/3), D.K. Metcalf (6/123/1), Michael Thomas (8/114/1), and Andy Isabella (3/78/0) all beat fantasy expectations against Tampa within the Bucs’ last four games. I’m chalking up Conley’s lack of inclusion in this week’s Buy Low Air Yards Model to a human-err malfunction by Josh Hermsmeyer. … Westbrook has lacked the high-leverage opportunities of Chark and Conley as a short-area slot target, but this matchup gives Westbrook his best 2019 chance to break out. The Bucs have been burned for nine touchdowns on slot passes this year, while fellow slot WRs Tyler Lockett (13/152/2), Russell Gage (8/76/0), and Larry Fitzgerald (8/71/0) each tagged Tampa Bay for 15-plus PPR points within the last four weeks.