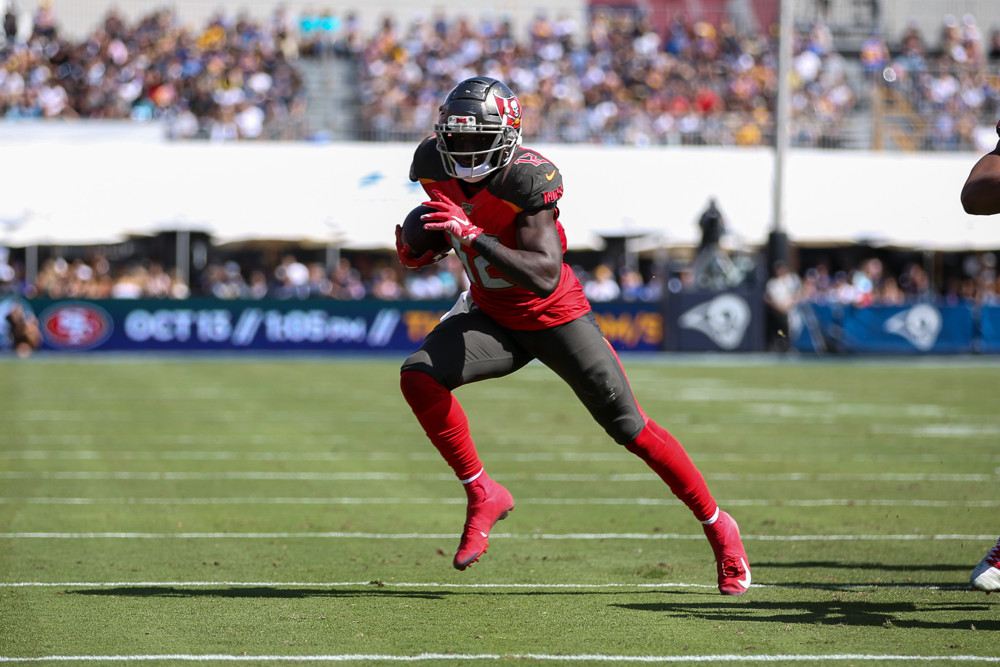 The 2-4 Bucs return from their bye to face a Titans defense that has allowed 20 points or fewer in 7-of-7 games and zero top-ten fantasy quarterback outcomes this year. Since the majority of Jameis Winston’s struggles have come versus zone coverage, it’s notable that Tennessee plays zone on 66% of its passing snaps — a top-ten rate — and has yet to allow a single 2019 touchdown pass in zone. Jameis has a 4:8 TD-to-INT ratio against zone looks this season. While Winston is always capable of big games when his high-risk 50-50 decisions luckbox into positive outcomes, I personally would prefer to stream the Titans’ D/ST here. … Tampa Bay’s pre-bye Week 6 blowout loss to Carolina provided minimal clarity on any potential changes to OC Byron Leftwich’s backfield usage; Ronald Jones, Peyton Barber, and Dare Ogunbowale combined for only 16 touches, and Ogunbowale led the unit in snaps (58%) in game-long negative script. Jones has drawn just six targets on the season and shown a basement-low floor with 56 total yards or fewer in three of Tampa Bay’s last five games. Barber has single-digit touches in three straight. Ogunbowale is primarily a pass blocker. Jones is Tampa Bay’s lone fantasy-viable running back, and even he is only a flex option with nearly zero receiving involvement on an underdog team playing on the road.

Update: O.J. Howard missed Wednesday and Thursday’s practices with a hamstring injury, making him even easier to sit in all season-long leagues. Should Howard miss against the Titans, Cameron Brate would become an enticing TE1 streamer. Despite playing far less than Howard thus far, Brate has already doubled him up in red-zone targets (4 to 2) and targets inside the ten-yard line (2 to 0).

Although the Titans should have lost in Week 7 only to be saved by Melvin Gordon’s final-play goal-line fumble, Ryan Tannehill injected life into Tennessee’s offense with his first 300-passing-yard game since September of 2016, showing decisiveness, accuracy, and composure predecessor Marcus Mariota sorely lacked. The Bucs’ pass-funnel defense has supported high floors by allowing top-15 quarterback results in four straight games, including top-four outcomes to Daniel Jones (QB2), Jared Goff (QB4), and Teddy Bridgewater (QB4). Down to 24th in both sack rate (4.9%) and QB Hit Rate (13.3%), Tampa’s defense combines gifting clean pockets with poor coverage, surrendering the NFL’s fourth-most 20-plus-yard completions per game (4.3). While I question Tannehill’s upside on what remains a run-based team, he offers plug-and-play streamer appeal in this plum draw. … Derrick Henry extended his streak of 100-plus yards and/or a touchdown in home games to eight in last week’s victory and is now averaging 20.3 touches on the year. Dion Lewis topped four touches just once in the last six weeks. While the Bucs pose a difficult on-paper run-defense matchup – DC Todd Bowles’ unit has stymied enemy backs for 116/315/3 (2.72 YPC) rushing – Henry’s workload security as a home-favorite bellcow should keep him locked into season-long lineups as an RB2. Jameis Winston’s tendency to implode should also put Henry on the FanDuel tournament radar in correlations with Tennessee’s D/ST. Averaging fewer than two targets per game, Henry is always less appealing on full-PPR Draft Kings.