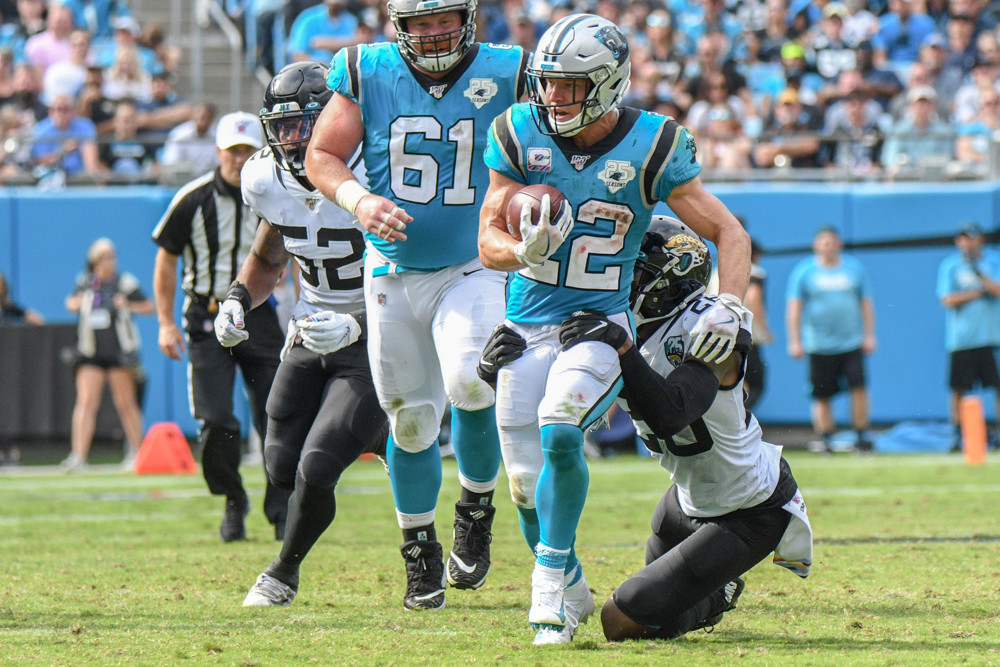 The Bucs’ defense reinforced its pass-funnel nature in last week’s 31-24 Superdome loss wherein Teddy Bridgewater set Todd Bowles’ secondary ablaze for four touchdowns and just his fifth 300-plus-yard game in 32 career starts. Tampa Bay has allowed consecutive top-four fantasy weeks to Daniel Jones (QB2), Jared Goff (QB4), and Bridgewater (QB4) while permitting the NFL’s third-most completions of 20-plus yards (22) and falling to 22nd in the league in sacks with 11, all but two delivered by one player (Shaq Barrett). Although Kyle Allen has returned to Earth since his four-score Week 3 destruction of Arizona, this matchup gives him low-end QB1 streamer appeal and should lock Allen into two-QB-league lineups. … No team has better defended Christian McCaffrey this season than Bowles’ Bucs, which held him to 53 scoreless yards on 18 touches in Week 2. CMC has 179 yards or more in each of his other four games. Tampa Bay also limited Alvin Kamara to 104 yards on 22 touches last Sunday and has permitted just 92/250/2 (2.71 YPC) rushing to enemy backs this year. Even as McCaffrey is an obvious top-three RB1 play each week regardless of opponent, there are reasons to curb expectations in this matchup. … Reggie Bonnafon ripped a 59-yard touchdown run off the bench in the fourth quarter of last week’s win over Jacksonville, finishing with a 5/80/1 rushing line and showing he is McCaffrey’s fantasy handcuff.

Jameis Winston’s Week 5 step back after two monster games can be largely attributed to New Orleans’ time-of-possession domination; the Bucs’ offense ran a season-low 55 plays and got clocked 33.5 to 26.5 in the Saints’ 31-24 win. Tampa Bay’s Week 6 possession time should rebound after Bruce Arians’ team held the ball for 34 minutes in its Week 2 win at Carolina. More concerning is Winston’s matchup against the Panthers’ zone defense; Jameis has a 20:20 TD-to-INT ratio when facing zone compared to a 26:6 TD-to-INT ratio against man since the beginning of 2017. Also worrisome is Tampa Bay’s losses of RG Alex Cappa (broken arm) and RT Demar Dotson (hamstring), who block on red-hot Panthers LOLB Brian Burns’ side of the field. Still playing some of the best football of his career over the past three weeks with consecutive fantasy scores of QB5 > QB1 > QB14, Winston remains a viable if risky play in Week 6’s fourth-highest-totaled game. … Playing from behind certainly impacted things, but Arians and OC Byron Leftwich once again stayed true to their three-man RBBC at New Orleans with Ronald Jones handling the most touches (11), Peyton Barber the most snaps (35%), and Dare Ogunbowale the most routes run (16) in the group. The good news is Carolina’s Kawann Short-less defense can be run on, having yielded 109/512/4 (4.70 YPC) rushing to enemy backs. The bad news is Arians is committed to this incredibly fantasy-unfriendly rotation that lowers all members’ floors and ceilings regardless of their opponents.

Jameis’ Weeks 1-5 target distribution: Chris Godwin 43; Mike Evans 38; Ogunbowale 16; O.J. Howard 14; Breshad Perriman 12; Cameron Brate 10; Barber 9; Bobo Wilson 7; Jones 6; Scott Miller 2; Justin Watson 1. … Coming off consecutive monster performances, Godwin should stay hot against a Panthers defense that has surrendered valuable PPR production to slot WRs The God Himself (8/121/1), Dede Westbrook (7/82/0), Christian Kirk (10/59/0), Cooper Kupp (7/46/0), and Larry Fitzgerald (5/36/1). All told, Carolina has yielded completions on 39-of-47 slot targets (83%) this season. The Panthers also play zone coverage at an 85% clip, and Godwin leads all NFL wide receivers in passer rating when targeted in zone (152.8), per Sports Info Solutions. … Evans is the squeaky wheel after last week’s goose egg in Marshon Lattimore’s coverage, although Week 6 opponent James Bradberry is no slouch. Evans’ last five stat lines versus Carolina are 4/61/0 > 4/48/0 > 1/16/0 > 6/107/0 > 5/60/0. I’m sticking with Evans as a season-long WR1 play, but Godwin is clearly the superior one-for-one bet against the Panthers. … Howard has yet to exceed five targets in a 2019 game and didn’t see a single look when these teams met in Week 2. Continue to stream waiver-wire tight ends over Howard.