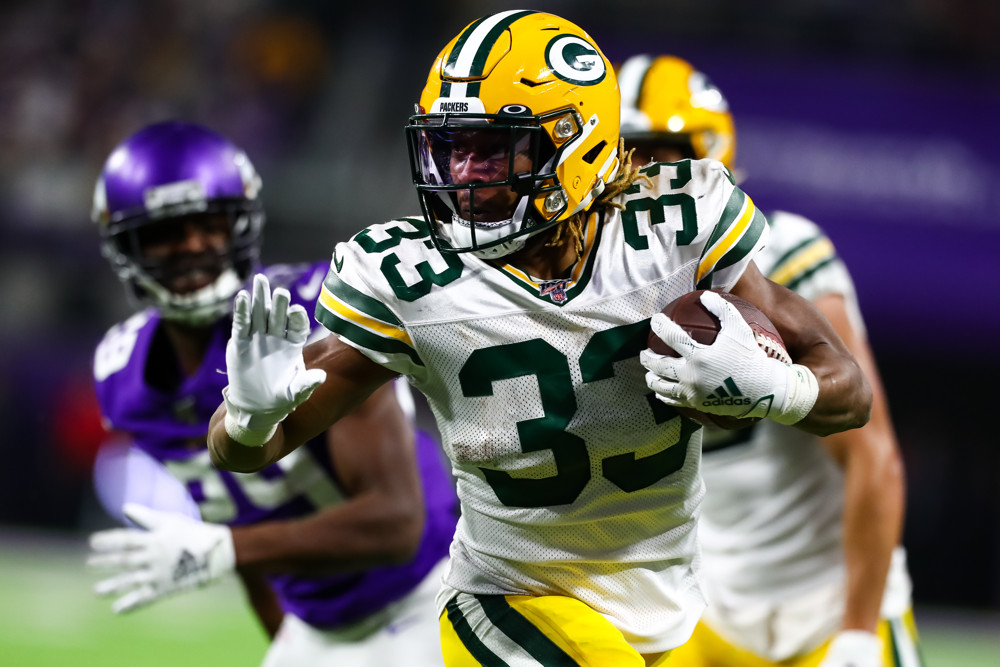 Evan Silva’s Fantasy Transactions Tracker will offer analysis on each fantasy-relevant move of the 2021 offseason ranging from small-time but noteworthy reserve/future signings to blockbuster trades and free agent additions.

Editor’s Note: Our 2021 Draft Kit is LIVE! We have Best Ball rankings and strategy articles to prepare you for offseason drafting. We’ll have a full content schedule available closer to the season. Click here for details.

Despite an abysmal 3:12 TD-to-INT ratio on 135 career pass attempts, Peterman is a favorite of Jon Gruden and looks set to spend his third straight season with Gruden’s Raiders. Nos. 1 and 2 quarterbacks Derek Carr and Marcus Mariota have been the subject of offseason trade rumors.

Out of football for all of 2019 following a marijuana and weapons arrest, Collins briefly resurfaced in Seattle last year, rushing 18 times for 77 yards and two TDs in three appearances and playing two special teams snaps in the Seahawks’ playoff loss to the Rams. With Chris Carson‘s contract expiring, it’s not crazy to think Collins could sneak his way into a 2021 committee role.

Long enticing for his athletic profile and versatility, Prosise is on his third NFL team in six years. He’s worth monitoring in deep fantasy settings but would be fortunate to earn a roster spot in Bucs camp.

A career blocking tight end on his seventh NFL team, Tomlinson helped fill in for Nick Boyle following Boyle’s year-ending Week 10 knee injury. The Ravens have enough confidence in Boyle’s recovery that they signed him to a two-year, $13 million extension in January. Tomlinson will return to compete for a roster spot.

Matthew Stafford to Rams – Sean McVay’s team acquired Stafford from Detroit in exchange for Jared Goff, a 2021 third-round pick, and first-rounders in 2022 and 2023. The Rams haven’t made a first-round selection since 2016 and appear destined to continue that streak until 2024. Around Stafford, the Rams return critical skill-position players Robert Woods, Cooper Kupp, Tyler Higbee, and Cam Akers behind an offensive line that brings back 4-of-5 starters. The Rams fielded 2020’s No. 4 DVOA-rated defense after Stafford spent the year playing across from the NFL’s last-ranked group. Stafford’s off-script and second-reaction playmaking ability are vastly superior to predecessor Goff’s, while Stafford’s efficiency has a chance to skyrocket based on improvements in coaching and supporting cast. I’m buying 33-year-old Stafford resuming peak performance under McVay and would like him as a longer-shot MVP bet if Stafford were posted at friendlier odds. His 16-to-1 pricing at DK Sportsbook is unappealing.

Carson Wentz to Colts – Wentz reunites with Frank Reich, his offensive coordinator in Philadelphia for Wentz’s rookie (2016) and MVP-caliber (2017) campaigns. Even after LT Anthony Castonzo’s retirement, the Colts’ offensive line is superior to the Eagles’, although Indy’s weaponry needs work. While Wentz’s inaccuracies are an ongoing concern, Reich’s emphasis on having his quarterbacks get the ball out quickly should help offset Wentz’s tendency to stand and stare for too long in the pocket. Wentz’s strengths of dual-threat capability and tight-window aggressiveness remain intact. Since the conditional 2022 second-round pick Indianapolis surrendered to acquire Wentz can elevate to a first-rounder based on playing time, the Colts will be incentivized to sit Wentz early should he flounder in his first year with the team. In both real life and fantasy, Wentz should be approached as a boom-bust 2021 commodity.

Jared Goff to Lions – Goff arrived in Detroit as part of January’s blockbuster Matthew Stafford deal, joining one of the league’s long dysfunctional organizations lacking continuity at receiver with Kenny Golladay, Marvin Jones, and Danny Amendola’s contracts expiring and dotted with coaching question marks helmed by run-game fanboys Dan Campbell and Anthony Lynn. In L.A., Goff was an environment-controlled quarterback who floundered in virtually all adverse conditions consisting of under-pressure plays, forced improvisation, and suboptimal weather. On a rebuilding Lions team making over its front office and coaching staff with major personnel uncertainty, Goff is set up to face even more adversity.

A favorite of Washington OC Scott Turner from their time together in Carolina, Heinicke’s stock rose when he threw for 306 yards, ran for 46, and accounted for two scores in January’s Wild Card spot start at Tampa Bay. Although Heinicke’s skill set is backup caliber, he looks likely to have a hand in The Football Team’s probable wide-open quarterback battle. Heinicke offers enough short-term opportunity and dual-threat capability to be roster worthy in Dynasty and Superflex leagues. He ran 4.62 coming out of Old Dominion and has rushed for 101 combined yards over his last three NFL appearances.

Rosen has been a colossal bust since the Cardinals made him 2018’s No. 10 overall draft pick, but there are reasons Rosen went that high, and any Kyle Shanahan-coached quarterback is worth monitoring. Nick Mullens and C.J. Beathard’s contracts are up, while Jimmy Garoppolo’s future is unclear.

Hilliard is a No. 3-caliber running back with some special teams value. He’ll compete for a roster spot in Houston.