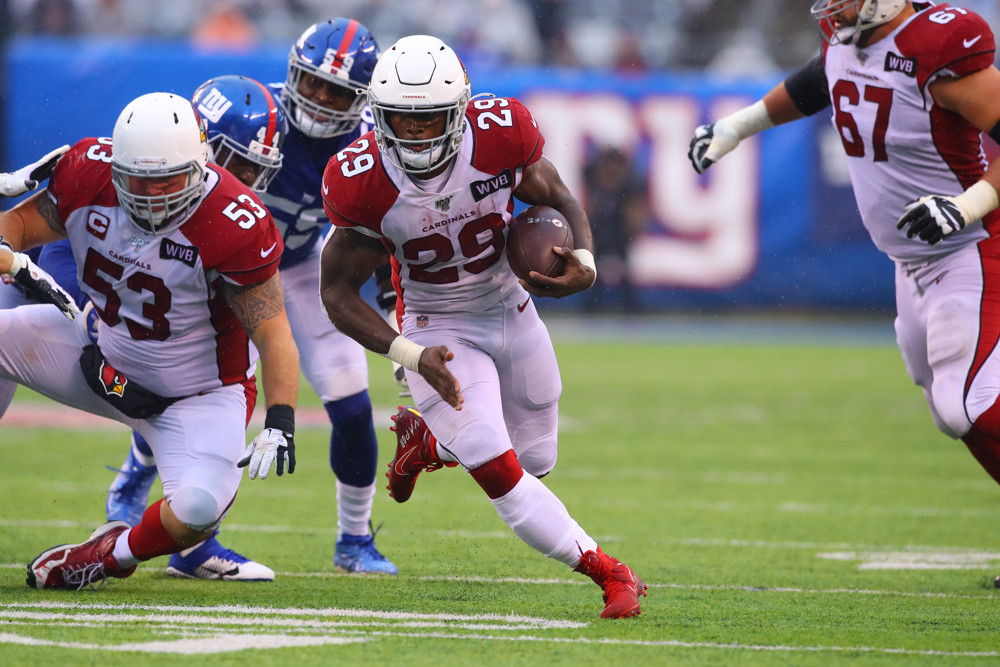 You know where you stand with your fantasy team heading into Week 8.  If you’re in a position of strength, filling a roster spot with a high-upside stash can be in your best interest.  If you’re fighting for a playoff spot, you might need to prioritize a more playable asset for this week.  Thankfully, there are some options for every sort of occasion on this week’s waiver wire.  As always, if you have any questions hit me up on Twitter @RyanReynNJ or via email at [email protected]

Drop considerations, running back handcuffs and stashes, as well as the keep an eye on section are all available at the bottom of the column.  Additionally, you could conceivably drop anyone in those three sections if you so desired.

Defenses
Note: If Matt Ryan is ruled out, the Seahawks defense would be just behind the Colts defense as a potential streaming option this week.
1. Steelers – 2% FAAB Budget
2. Colts – 1%
3. Lions – 0%

Drop Considerations
Note: Drop considerations are organized by position.  All players listed in the keep an eye on section or among the running back handcuffs and stashes also serve as droppable players in certain scenarios.

Mitch Trubisky: Apart from the garbage time production in Week 7, it’s been a bad year for the Bears offense on a whole to this point.

Cam Newton: To this point, if and when Newton will return to action remains uncertain.  The coaching staff has even said that there is no guarantee that Newton will start when he’s ready.

Kenyan Drake: If you’re holding onto Drake the best-case scenario is that he’s traded, as his usage has been volatile in a bad Miami offense.

Duke Johnson: While Johnson is not a must drop option, Carlos Hyde continues to be the primary ball carrier for the Texans.

Mecole Hardman/ Demarcus Robinson/ Byron Pringle: With the injury to Patrick Mahomes, all Chiefs assets have reduced value until he returns.  All of these players could be worth rostering in very deep leagues, but all of them are also worthy of being dropped for upgrades.

John Ross: Ross is on IR with a shoulder injury.

Will Dissly: Dissly is out for the year.

Jordan Reed: Reed has still not played a down in 2019.

David Njoku: Njoku is on IR, so stash him if you can but drop him if you need to.

Rex Burkhead: Burkhead has missed the last three games due to injury.

Tony Pollard: Pollard remains little more than Ezekiel Elliot insurance with a chance for increased usage in blowout victories.  That said, he would become a max FAAB bid type of fantasy asset if Elliot was set to miss any time.

Darrel Williams: Patrick Mahomes injury decreases the viability of all present or potential Chiefs assets, but long-term Williams still has a path to being a difference maker down the stretch.

Gus Edwards: Edwards continues to be the primary backup behind Mark Ingram.

Ty Montgomery: Montgomery remains Le’Veon Bell insurance in a Jets offense that has some strong matchups beginning in Week 9.

Ito Smith: Smith has already been ruled out for Week 8 due to injury.  Brian Hill is set to fill Ito’s role.

Justice Hill: The rookie remains the most dynamic athlete out of the Ravens running backs, but his offensive playing time is nearly nonexistent.

Darwin Thompson: Thompson has not played an offensive snap since Week 4.  On Twitter, my pinned Tweet compares Thompson’s pro day performance to former Eagles running back Brian Westbrook’s combine performance.  They are nearly identical.  Now that Thompson’s stock is very low and his enthusiastic owners are likely frustrated, I would take a cheap flyer on him in dynasty if I could.

Keep an Eye On

Kyle Allen: Allen has been named the starter once again heading into Week 8 with a tough matchup at San Francisco.

Teddy Bridgewater: You have to hand it to Teddy, they have not really asked him to go out and win games but he has played well in Drew Brees absence.

Derek Carr: With a Week 8 matchup in Houston, Carr would be the 4th option among listed streamers in a high total, indoor game.

Andy Dalton: Dalton threw for 276 yards with a touchdown and 3 interceptions, while adding 33 yards rushing and a score in Week 7 against the Jaguars.

Ryan Fitzpatrick: Fitzpatrick gave the Bills a game in Week 7, throwing for 282 yards with a touchdown and an interception.

Case Keenum: Keenum is on the injury report headed into a Week 8 matchup in Minnesota on Thursday Night Football, after only throwing 12 passes in Week 7.

Marcus Mariota: Mariota has been benched for Ryan Tannehill.

Josh Rosen: Rosen was benched for Ryan Fitzpatrick in Week 7.

Mason Rudolph: Rudolph missed Week 6 with a concussion, he is rumored to be in line to return for Week 8 against Miami.

Kalen Ballage: Ballage rushed 3 times for 7 yards and a score in each of the last 2 weeks.

Giovani Bernard: Despite consistently playing from behind, Bernard is seeing very limited usage in this offense.

Brandon Bolden: With Rex Burkhead out once again, Bolden ran once for 2 yards while catching all 4 of his targets for 39 yards in Week 7’s blowout of the Jets.

Reggie Bonnafon: The Panthers were on their bye in Week 7.

Nyheim Hines: Hines only had 2 targets and 1 carry in Week 7’s matchup with Houston.

Dion Lewis: Lewis’s role in the Titans offense remains minor, as he only had 1 carry with an uncaught target in Week 7 against the Chargers.

J.D. McKissic: McKissic did not see his role expand despite Kerryon Johnson leaving Week 7 early with a knee injury.  McKissic is worth monitoring in deeper leagues given Johnson’s week-to-week status.

Raheem Mostert: Mostert had no workload and only played on special teams in Week 7.

Dare Ogunbowale: Ogunbowale has served as the primary pass catching running back for the Bucs, who are coming off their Week 7 bye.

Jalen Richard: Richard only had 1 target despite the Raiders playing from behind in Week 7 in Green Bay.

T.J. Yeldon: Yeldon was a healthy scratch in Week 7 with the return of Devin Singletary.

Nelson Agholor: Agholor caught 2-of-4 targets for 24 yards while not laying out for a deep crosser in Week 7 in Dallas.

Jaron Brown: Brown caught 3-of-6 targets for 60 yards in Week 7 versus Baltimore.

Kendrick Bourne: Bourne caught 3-of-4 targets for 69 yards in Week 7.

Miles Boykin: Boykin caught both of his targets for 55 yards in Week 7 at Seattle.

Deon Cain: Cain had 30 offensive snaps, but no usage in Week 7.

Chris Conley: After several slow weeks, Conley caught 3-of-8 targets for 83 yards in Week 7 against the Bengals.

Trevor Davis: Davis caught both of his targets for 26 yards in Week 7 in Green Bay.

Alex Erickson: Erickson exploded in Week 7 against the Jaguars with 8 catches on a staggering 14 targets for 137 yards.  Erickson’s offensive snaps also rose from 47 in Week 6 to 66 in Week 7, with 21 of those coming from the slot.

Taylor Gabriel: Gabriel caught 1-of-2 targets for 6 yards in Week 7.

Adam Humphries: Humphries caught all 4 of his targets for 40 yards in Week 7.

Bisi Johnson: With Adam Thielen set to miss Week 8, Johnson could be inline for increased usage on Thursday Night Football.

Anthony Miller: Miller’s usage continues to be on the rise, as he caught 5-of-9 targets for 64 yards in Week 7 versus the Saints.

Trey Quinn: Quinn caught 2-of-3 targets for 30 yards during Week 7.

DeVante Parker: Parker and teammate Preston Williams continue to see opportunity that is beyond what one can normally find on the waiver wire.  Efficiency is normally the issue in Miami, as Parker caught 5-of-10 targets for 55 yards and a score in Week 7 in Buffalo.

Zach Pascal: Pascal had a second usage spike on the season in Week 7, hauling in 6-of-7 targets for 106 yards and 2 touchdowns against Houston.

Hunter Renfrow: Renfrow caught 2-of-3 targets for 14 yards in Week 7.

Chester Rogers: Rodgers caught both of his targets for 24 yards in Week 7.

Demaryius Thomas: Thomas caught 3-of-9 targets for 42 yards during the Jets blowout loss against the Patriots in Week 7.

James Washington: Washington did not play in Week 6, the Steelers face Miami on Monday Night in Week 8.

Preston Williams: Williams had an efficient Week 7, catching 6-of-8 targets for 82 yards against Buffalo.  Williams and teammate DeVante Parker have opportunity metrics beyond what one would normally find on the waiver wire.  However, the instability and inefficiency of the Dolphins offense makes both wide receivers difficult week-to-week plays.

Albert Wilson: Wilson caught 1-of-2 targets for 22 yards in Week 7.

Javon Wims: Wims caught his only target for a 6 yard touchdown in Week 7.

Cameron Brate: Brate played 30-of-80 snaps while catching 2-of-4 targets for 47 yards and a score in Week 6 against the Panthers in London.  The Bucs had their bye in Week 7.

Tyler Eifert: Eifert had underwhelming usage again in Week 7, catching both of his targets for 10 yards.

Rhett Ellison: Ellison caught both of his targets for 33 yards and a score in Week 7.

Mike Gesicki: Gesicki caught all 4 of his targets for 41 yards against Buffalo in Week 7.

Dawson Knox: Knox caught 2-of-5 targets for 22 yards in Week 7 versus Miami.

Ricky Seals-Jones: The athletic Seals-Jones had another spike game, catching 3-of-6 targets for 47 yards and a touchdown in Week 6.  Coming off the Browns bye, the Browns head to New England in Week 8.

Jonnu Smith: Smith caught all 3 of his targets for 64 yards while Delanie Walker only played 5 offensive snaps due to injury Week 7.

Benjamin Watson: Watson caught 3-of-5 targets for 18 yards in Week 7.