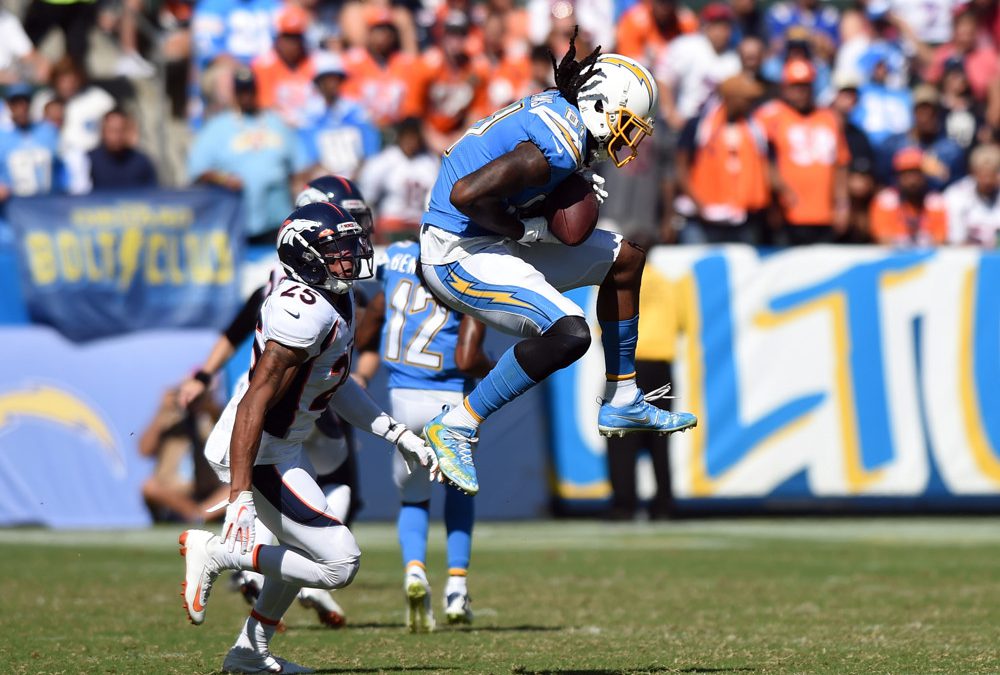 If you’re still alive in Week 15, you may want to consider waiver moves that could either help set you up or limit your opponents’ options should you advance to your season-long championship in Week 16.  In this lookahead we have included some difference making options like Will Fuller and Mike Williams whose ownership levels are slightly higher than players we normally cover in the waiver wire column.  As always, if you have a question feel free to contact me on Twitter @RyanReynNJ or via email at [email protected]

Phillip Rivers vs Raiders: The upside for Rivers in this matchup is simple: the Raiders have given up 34 or more points in each of their last three games while yielding over 300 yards passing to both Sam Darnold and Ryan Tannehill over that span.  While Rivers did not play particularly well on November 7th in Oakland, the Chargers will likely be significant home favorites against a struggling Raiders defense in this matchup.

Ryan Fitzpatrick vs Bengals: Volume and favorable matchups have been behind Fitzpatrick’s rise to fantasy relevance in recent weeks.  Fitzpatrick gets another high-upside matchup in Week 16 when the Dolphins host the Bengals, as the return of Andy Dalton to the starting lineup gives this game some shootout potential.

Andy Dalton at Dolphins: Dalton has the best possible matchup against Miami in Week 16.  It’s understandable if you’d rather bet on something other than the one-win Bengals offense when your fantasy championship is on the line next week, but the upside is definitely here in this matchup.

Daniel Jones/ Eli Manning at Redskins: If Jones is able to return for the Miami game in Week 15, you’ll have a much better idea of how viable he would be in this solid matchup against the Redskins.  If Jones mobility is limited or Manning starts in Week 15 against the Dolphins, it might be best to shop for other options in this spot.

Ryan Tannehill vs Saints: The Saints are the most talented defense Tannehill has faced since taking on the Chargers back in Week 7.  Still, Tannehill has been a reliable fantasy asset with some monster performances over the past two months and he gets the Saints at home.  If you want Tannehill, you likely have to get him now since the Titans host the Texans in a potential shootout in Week 15.

Mitch Trubisky vs Chiefs: Risk tolerance and need should dictate how viable of an option Trubisky is for you next week.  If you’re in the finals in a 2-QB format, Mitch has real upside in this matchup, especially if the Bears continue to encourage Trubisky to run as he did in Week 14 against Dallas.

Gardner Minshew at Falcons: The Jaguars have been blown out in each of their last 5 games, so the floor is low for everyone on Jacksonville.  Still, Minshew has played well in most of his starts this season and this is an indoor game with some shootout potential.

Jacoby Brissett vs Panthers: Given the state of the Colts pass catching group and the Panthers inability to stop the run this season, Brissett will likely be firmly entrenched as a QB2 in rankings next week.  If T.Y. Hilton returns, this could become a more interesting play.

Kyle Allen at Colts: The Panthers have been pretty bad in each of the last two weeks, so it would be smart to deploy other options when possible next week.  However, if Carolina plays well against the Seahawks in Week 15, the Colts have given up over 30 points in each of their last two games.

Ryan Griffin vs Texans: Quarterback Jameis Winston currently plans to play in Week 15 despite having a fracture in his right thumb.  If that situation leads to Winston missing Week 16’s potential shootout with the Texans, Griffin would step into a great spot for owner’s in 2-QB formats.

Will Fuller at Buccaneers: You have to check on Fuller’s injury status and, if active, if he was a full practice participant heading into Week 16.  If Fuller is ready to go in this spot the sky is the limit here and he is one of a handful of guys that I would not want to see in an opponents’ lineup in Week 16.  If Fuller has landed on your waiver wire, you should consider grabbing him even if you don’t have the confidence to play him.

Mike Williams vs Raiders: Williams ownership levels are low enough that he may have found his way on your waiver wire with a sneaky-appealing Week 15 matchup with the Vikings.  Williams caught his first touchdown on the season in Week 14’s blowout over the Jaguars, and he has a big ceiling opportunity against the Raiders in Week 16.  Even if you don’t feel comfortable playing Williams, he’s among the realistically available players that I’d rather not face in Week 16.

DeVante Parker vs Bengals: Parker is currently in the concussion protocol heading into Week 15 and he’s no longer available in the vast majority of leagues.  He has, however, been included since our first Preparing for the Playoffs lookahead back in Week 9.  So, we did not want to exclude him considering his tremendous value in this matchup if he’s able to suit up.

Bengals Wide Receivers at Dolphins: Tyler Boyd is not available in the vast majority of leagues and Auden Tate has been moved to injured reserve.  That makes wide receivers John Ross and Alex Erickson worthy of strong consideration in this fantastic matchup against Miami.  Something to consider, while also keeping in mind that A.J. Green may continue to not play a down this season, is that Green is unhappy with his contract status.  Returning against the Dolphins in Week 16 and blowing them up would be a reasonably sound business decision for Green.  If Green remains out, and that’s the outcome we should probably be banking on at this point, Ross has a big ceiling in this game, particularly if his usage trends up in Week 15.

Giants Wide Receivers at Redskins: Darius Slayton and Sterling Shepard have had more consistent usage (specifically target share) than Golden Tate over the past month.  Still, all three Giants pass catchers have a strong enough role to be a factor when fantasy championships are decided in Week 16.

Bears Wide Receivers vs Chiefs: Allen Robinson is not available on the vast majority of waiver wires, which leaves Anthony Miller as the most valuable Bears pass catcher that can still be had in a variety of leagues.  Miller has been on a three-game hot streak, which has directly coincided with quarterback Mitch Trubisky’s own recent surge.  If Taylor Gabriel is able to return from injury, he could be a high-upside dart throw in a plus matchup in Week 16.

Jaguars Wide Receivers at Falcons: If D.J. Chark is set to miss any time, both Dede Westbrook and Chris Conley would be in line for an expanded role, in a great matchup in Week 16.  If Chark is active for this game, Westbrook and Conley would both warrant consideration in superflex spots given the matchup.  The Jaguars have been blown out 5 weeks in a row, which makes all of their offensive options volatile plays for fantasy purposes.

Jacob Hollister vs Arizona: Even if you don’t want to plug Hollister into your starting lineup, it’s in your best interest to not face him in Week 16 considering how routinely the Cardinals have been destroyed by enemy tight ends this year.

O.J. Howard vs Texans: Sometimes early season busts become factors late in the year, and Howard has a few things going for him in that regard.  The first is that he’s had solid outputs in back-to-back weeks.  The second is that Mike Evans season-ending injury could, conceivably, result in Howard becoming the second option in the Buccaneers passing attack behind the God himself Chris Godwin.  The third is that the Buccaneers Week 16 opponent, Houston, just gave up a 100-yard game to the Broncos athletic tight end Noah Fant last week.  While there is a lot of uncertainty with this brand of Howard optimism, if he receives a significant target share against the Lions in Week 15 this could be a great spot for a guy that was taken in the 4th and 5th round in fantasy drafts this preseason.

Mike Gesicki vs Bengals: Gesicki has had between 5 and 7 targets in every game since Preston Williams’ season-ending knee injury back in early November.  While the efficiency has not always been there, his volume has been consistently strong for the position and this is a great matchup against the Bengals.

Noah Fant vs Lions: Fant is legitimately talented and he’s had two difference making hundred-yard games with a score on the season.  His once elite volume has taken a bit of a step back in both of Drew Lock’s starts to date, but he does have a path to upside in a solid matchup against the Lions in Week 16.

Chargers vs Raiders: The Chargers have an elite edge rush duo and an elite secondary since the return of safety Derwin James, giving this defense game derailing tools when their main pieces are healthy.  The Raiders have been a mediocre at best offense in recent weeks, but their offensive line has exceeded expectations on the season.  The Raiders offensive line keeps this from being a slam dunk play, but there is also a clear path to upside if the Chargers offense can create an early lead and force the Raiders to play from behind.

Chiefs at Bears: Bears quarterback Mitch Trubisky has been playing his best football of the season recently, but he still provides opposing defenses with turnover opportunities even when things are going well.  The combination of the Chiefs improving defense in recent weeks and Trubisky’s inconsistency creates a path for the Chiefs D to be among the top streaming options next week.

Falcons vs Jaguars: If the Jaguars offense underwhelms against the Raiders in Week 15, it would not be unreasonable to deploy the Falcons defense against a Jaguars team that has been blown out in each of their last 5 games.

Colts vs Panthers: Playing the Colts defense would primarily be a bet against Panthers quarterback Kyle Allen.  It would also be a bet against a Carolina team that fired their head coach and changed their offensive coordinator before Week 14’s blowout loss against Atlanta.

Broncos vs Lions: If David Blough remains under center for the Lions, Denver could end up being a top streaming option in Week 16.

Bills at Patriots: The Patriots offense has been inefficient and has just not looked right since quarterback Tom Brady popped up on the injury report with a right elbow issue leading into Week 13’s game with the Texans.  If Brady continues to look off during Week 14’s contest in Cincinnati, the Bills defense could be a stronger fantasy option than originally anticipated in this divisional clash.