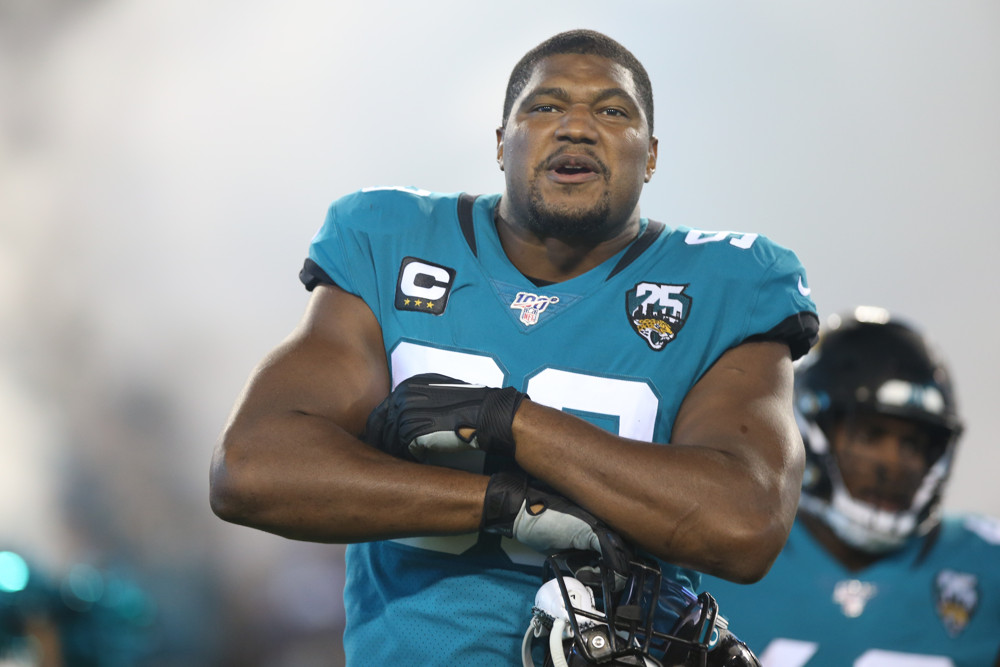 DEFENSIVE LINE MISMATCHES
1. Jaguars DL vs. Bengals OL
Key matchups: DEs Yannick Ngakoue/Josh Allen vs. LT Cordy Glenn/RT Bobby Hart.
Notes: The Jaguars DL ranks 12th in adjusted sack rate, tied for 4th in sacks (19), and Calais Campbell leads the NFL in pressures among DTs. The Bengals OL ranks 27th in adjusted sack rate, giving up 22 sacks, and is giving up the 3rd most pressures in the NFL (81). LT Cordy Glenn is returning to the lineup for the first time this season. RG John Miller missed Wednesday’s practice and is likely out with a groin injury.

The Jaguars DL has been an impressive unit to study on tape due to the amount of talent they have across their front along with perhaps the most versatile DL in the league in Calais Campbell, who regularly plays up and down the line of scrimmage. Not knowing where he will line up next presents a lot of problems for even the best offensive lines, not to mention the patchwork group Cincinnati will be putting out there this weekend.

There aren’t many pass-rushing duos in the NFL with more explosiveness off the edge than Yannick Ngakoue and Josh Allen, each with the ability to threaten tackles up the field using their burst and get-off that sets up inside counters later in games.

Glenn returning to action for the first time all year while already showing signs of slowing down last season combined with Hart being one of the bottom-tier players at his position spells serious trouble for a Bengals front that has no clear strength with a dynamic trio of rushers coming to Paul Brown Stadium. That’s before mentioning other legit threats to go off in this game such as Dawuane Smoot, Taven Bryan, Abry Jones, and Marcell Dareus.

The 49ers DL have been on an absolute tear as of late, racking up 38 QB hurries and 10 sacks over the last 2 weeks with rookie RDE Nick Bosa leading the charge. LT Donald Penn has been solid after being signed late in the off-season and missing last year with injury, but “solid” will be overmatched against the force that is Bosa.

Opposite Bosa is speed-rushing demon Dee Ford facing off against RT Morgan Moses who has had a rough start to the season but has been settling back into his normal solid level of play as of late. Moses is a huge tackle with great length but has had trouble in the past dealing with elite speed off the edge that Ford will bring to this matchup.

LG Ereck Flowers has been surprisingly competent thus far after sliding inside after 4 disappointing years at LT, but DT DeForest Buckner is physical freak with an array of refined pass-rush moves that can be a nightmare matchup isolated against both Flowers and C Chase Roullier.

Interim head coach Bill Callahan will want to run the ball early and often so opportunity could be scarce, but that is assuming the 49ers’ offense doesn’t carve up the Redskins’ defense and gain an early lead. Even without their starting offensive tackles, there is little reason to believe this 49ers offense won’t put their defensive line in position to pin their ears back and hunt.

3. Patriots DL vs. Jets OL
Key matchups: DTs Deatrich Wise Jr./Adam Butler vs. the Jets interior OL, DEs John Simon/Chase Winovich vs. LT Kelvin Beachum
Notes: The Patriots DL ranks 2nd in adjusted sack rate, 2nd in sacks (25), and has 10 players with at least 7 QB pressures, 5 with 10 or more. The Jets OL ranks 31st in adjusted sack rate with 25 sacks given up, and ranks 30th in OL pass-blocking efficiency. DE Michael Bennett is out this week due to suspension.

The Patriots’ defense is among the most productive pass-rushing groups in the league without a very good or elite single rusher instead relying on a creative set of stunts, blitzes, and spreading opportunity around to their DL and linebackers. This makes them especially difficult to prepare for given their unpredictability.

Conversely, the Jets OL has really struggled although a significant portion of that is due to terrible QB play once Sam Darnold went out with mono. Darnold’s return last week was a night and day difference in terms of pocket presence and awareness, in turn making the OL look a little bit better.

While the Jets OL isn’t as bad as some numbers and people may indicate, they are still a below average unit facing one of the best defenses in the NFL, especially at getting after the QB.

Everson Griffen has returned to his 2017 form this season and pairs with Danielle Hunter to give the Vikings the most fearsome set of edge-rushers in the NFL. Paired with a diverse blitz scheme centered around head coach Mike Zimmer’s double A gap mug front and a new variety of stunts this season, there aren’t many more difficult defenses to pass-protect against right now in the league.

The Lions have been a good pass-blocking OL per the metrics I typically use, but on film their tackles are simply overmatched from a skill-set and traits perspective, each being solid to good players at best. Frank Ragnow has locked down the center position but their guard rotation is concerning, especially because Kenny Wiggins struggles mightily with any sort of good or better pass-rushing DL, while simultaneously hindering the tackle he plays alongside of.

As the Lions continue rotating out either Joe Dahl or Graham Glasgow for Wiggins they should be mismatch consideration against dynamic fronts with multiple elite rushers such as the Vikings.

5. Saints DL vs. Bears OL
Key matchups: DEs Cam Jordan/Marcus Davenport vs. LT Charles Leno Jr./RT Bobby Massie, DT Sheldon Rankins vs. RGs Ted Larsen/Rashaad Coward
Notes: The Saints DL ranks 7th in adjusted sack rate, tied for 6th in sacks (18), and Cam Jordan/Marcus Davenport combine for the 2nd most sacks (8) and pressures (62) of any edge duo in the NFL. The Bears OL ranks 19th in adjusted sack rate, giving up 13 sacks. DE Trey Hendrickson was limited in practice this week and could make his return after missing the last 3 games with a neck injury. RG Kyle Long is on injured reserve, with either Ted Larsen or Rashaad Coward slated to take over.

These are two teams led by their defense (considering Saints QB Drew Brees is out with an injury) so it isn’t likely that one offense gains a lead large enough to unleash their DL on obvious passing downs, but there are a couple clear mismatches for the Saints DL to take advantage of when the Bears drop back to pass.

The Saints DL is an extremely deep group with an elite edge rushing duo in Cam Jordan and Marcus Davenport coupled with a strong rotation on the interior led by Sheldon Rankins and David Onyemata. The Bears OL will have a new starter at RG after Kyle Long was put on IR this week, with a veteran option in Ted Larsen or a former converted DT Rashaad Coward as an alternative option, neither of which should be expected to be anything more than adequate.

The main concern from a Bears perspective aside from a new starter on the OL is QB Mitch Trubisky’s return after missing the last couple weeks with a dislocated left shoulder. Trubisky’s pocket presence has left something to be desired in his time as the starter and he’s making his return against one of the more productive pass-rushing groups in the NFL. This Saints DL is a very tough test for both Trubisky and whoever is in at RG.

6. Rams DL vs. Falcons OL
Key matchups: DT Aaron Donald vs. LG James Carpenter/RG Jamon Brown, DE Dante Fowler vs. RT Kaleb McGary
Notes: The Rams DL ranks 19th in adjusted sack rate with 13 sacks. The Falcons OL ranks 10th in adjusted sack rate, giving up 14 sacks, is tied for 4th in most pressures (76) given up and tied for 3rd in most QB hits (15) given up. RG Jamon Brown has been in and out of the lineup the last two weeks with multiple injuries. CB Jalen Ramsey is slated to play after being acquired in a trade this week.

Aaron Donald is still the most dominant defensive player in football when you watch the film and he will be facing a marginal group of guards this week including former teammate Jamon Brown. Playing on turf in Atlanta will only accentuate his already unmatched quickness and he could be in for a monster day against an offense leading the NFL in pass attempts.

RT Kaleb McGary has struggled against top competition in pass-protection and while Fowler isn’t an elite player, he has developed into a quality pass-rusher who should be able to take advantage of this matchup.

An additional consideration is the impact of CB Jalen Ramsey and the boost in coverage that comes with his presence, providing more opportunities for the pass-rush to get home.

The Raiders defense ranks 30th in ESPN’s pressure rate this season and have no significant threat along their defensive line that can challenge a Packers OL that ranks 8th in adjusted sack rate with a top 5 tackle duo (David Bakhtiari & Bryan Bulaga) in the NFL. Expect QB Aaron Rodgers to have plenty of time to survey the field and pick apart this defense at home.